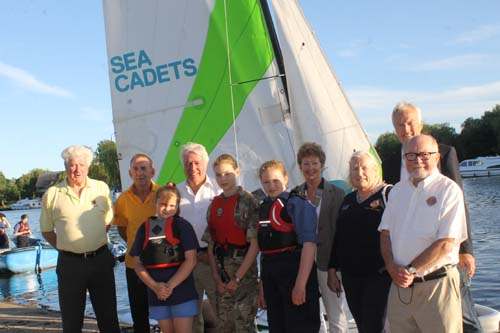 The Henley Sea Cadet’s, Henley Quest new sailing boat was officially launched with a splash of champagne on the bow on Monday evening by Pam Pitts, Chair of Henley Lions.

The boat was bought with the help of donation of £1225 from Henley Lions and £1,000 from Stuart Turner and this money was then match funded by the Marine Society and the Sea Cadets.   Sea Cadets throughout the UK helped designed the boat by completing a survey on what they would like to see and have on a new sailing dingy.  The boat was launched at the Southampton Boat Show last year. 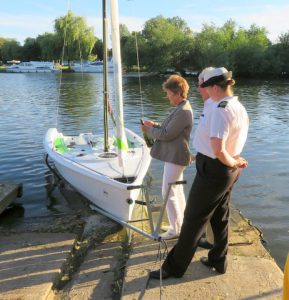 Dave Murray, a Henley Lion heard about the funds needed for the new dingy when he went to photograph for the Henley Herald at their recent Royal Navy Parade and recommended to the Lions to support the purchase of the new boat.

Pam Pitts, Chair of Henley Lions said,”The Henley Lions Club is delighted to be able to help with the purchase of the new racing dingy, The Henley Quest, enabling our Sea Cadets to compete with other groups. Henley Lions support many local groups and charities, particularly those focused on children and young people and we wish the Henley Sea Cadets every success.”

Chief Petty Officer Kelly Searles said, “The cadets are really excited to have a go and see how she sails on the Burghfield Lake where we sail as the river conditions tonight aren’t suitable.”

Phil Fletcher, Chairman of the Henley Sea Cadets said, “We’re very grateful to Stuart Turner, Henley Lions, the Marine Society and Sea Cadets.  Our next fundraising project is to purchase radios and train instructors on using these as the RYA are now stipulating that every boat should have a radio on board.”

If you would like to donate, please email Phil at phil.fletcher@btinternet.com 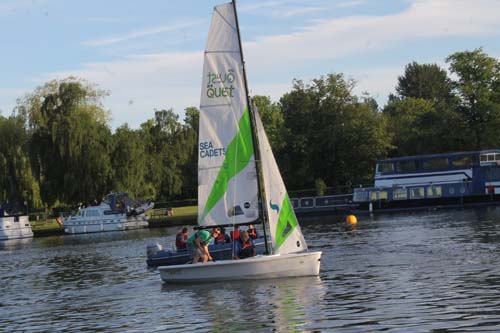