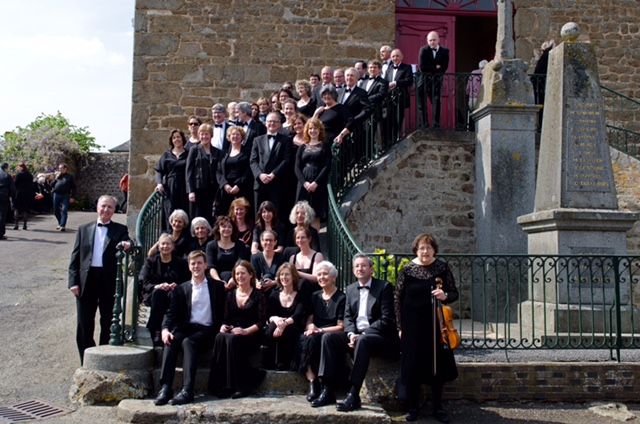 Henley Symphony Orchestra has been invited to play at Bled International Music Festival in Bled, Slovenia in July 2017.

Henley Symphony Orchestra, a leading amateur orchestra which often performs with internationally acclaimed artists, has made several visits to Henley’s twinning partners in Falaise, Normandy, France and Leichlingen, Germany. The most recent visit was in May 2014 during which the orchestra performed with choirs in Falaise and nearby Putanges  (the attached photo was taken during this visit).  The orchestra then welcomed the same choirs back the following month to perform together in its summer concert at Shiplake.

Henley Town Council entered into a twinning agreement with Bled, Slovenia in 2014, adding this relationship to that of its long-standing twinning arrangements with Falaise and Leichlingen.

There are 70  plus members of the orchestra who live  in or around Henley. Most  of these players will be  performing in the Festival  in addition to the orchestra’s  Musical Director, Ian Brown  and its leader, David Burton.

Three members of the orchestra’s committee undertook an initial visit to Bled in May  and, as a result, the orchestra was invited to participate in the annual  Bled Music Festival in July2017 .

The orchestra’s local sponsor, Davy Snowdon, founder and owner of Pristine Condition, a Global training company operating out of their Head office in Northfield End, has generously agreed to sponsor the orchestra’s visit.  Judy Whittaker, Chairman of the orchestra, said “We are very grateful for Davy’s generosity, which is of particular importance because of the higher cost of this twinning visit in comparison with previous twinning visits.”

Elvis Gets Right on Down with the Audience
Scroll to top