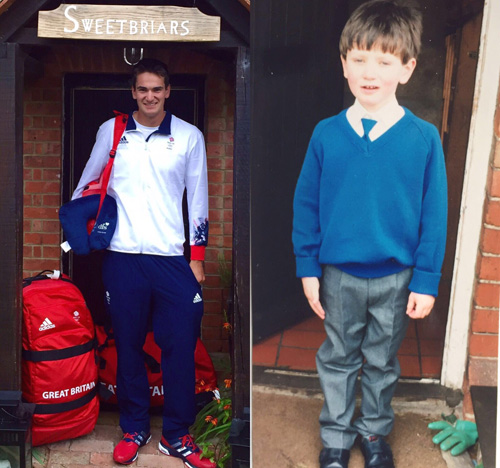 Stewart Innes who grew up in Shiplake and went to Shiplake Primary School has packed his kit and is flying off to Rio today to compete in his first Olympics.  Stewart, a member of Leander Club will be competing with fellow club member, Alan Sinclair, in the men’s pair.

Stewart said, “When I was younger I loved my tractor and wanted to be a farmer. I love all sports especially cycling and running, I was not particularly good at ball games but always wanted to be in the top teams!”

“I loved Shiplake Primary School. I remember walking across the fields with my brother and sister and playing conkers in the playground, sports day was good but the fete was great smashing plates and having rides in the old cars.”

Rowing is very much part of the Innes family – Stewart’s Dad, Duncan, Uncle and sister, Claire all rowed.  His Dad first took Stewart to Upper Thames when he was about 12 and then he started to row at St. Edwards School in Oxford.

After going to Durham University, Stewart started a Masters at Reading University and then started to row at Leander and he was part of the crew that won the Prince of Wales Cup in the quad at the Henley Regatta in 2013.  In 2014 Stewart represented Britain and won a bronze medal in the World University Rowing Championships in a single scull. Stewart said, “Afterwards GB Rowing Coach, Jürgen Grobler then asked me to go on training camp with the squad and I rowed in the GB eight last year at the European championships where we won bronze.” 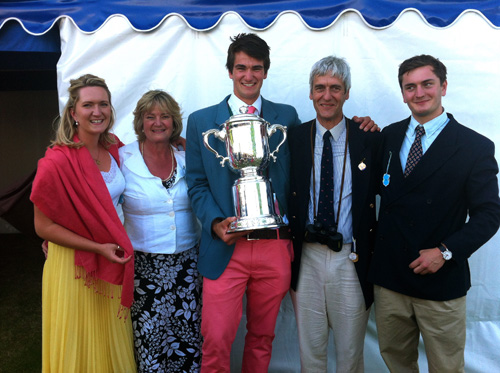 Stewart with his family at Henley Regatta in 2013

This year Stewart was 4th in the Olympic Trials, won a silver medal at the European Championships and a bronze in the World Cup in Poznan with Alan in the men’s pair after which they took part in hard fought trials and were finally selected for Rio.

Sportsmen have very different ways of preparing for a big race.  Stewart said, “Before racing I listen to some music and just concentrate and focus on the race plan.”

The hardest thing about being a rower Stewart told was being injured or ill and not being able to train or compete. When Stewart is not rowing he likes to play golf, eat and playing on his Playstation. “I love rowing, it is great to win, to achieve your goals and know all that hard training has paid off. It’s like reaching the highest mountain peak in the world,” added Stewart.

On hearing that he was selected for Rio, Stewart said, “I was relieved, excited and determined to do well.  The biggest challenge is keeping fit so we can do our best and race as well as we know we can. I am looking forward to winning!”

Stewart thinks that Alan and him work well together. It is Alan’s first Olympics too. Stewart said, “Alan is steady, calm and determined.  He has a good sense of humour and he is always supportive.  It has been great rowing with him – we have both enjoyed being in the pair.”

You can keep up to date with Stewart on Twitter twitter.com/StewartInnes1 and watch a very funny video of him trying all his Team GB kit on.

His Mum, Nicky said, “We are absolutely delighted for Stewart and hope his dream of success at the Olympics come true. We know how much this means to him and we are incredibly excited.”

We’d like to wish Stewart and all of the GB Team the best of luck in Rio.