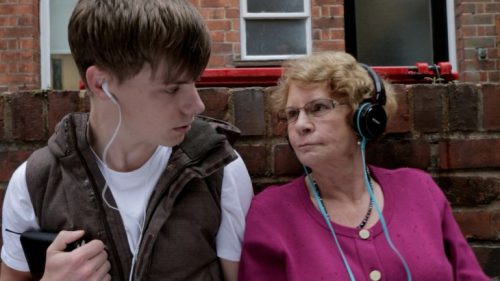 The highlight of the Henley Fringe Film Festival for many will have been the Saturday night screening of Tea and Cake, the award-winning feature film made by local film maker Kirsty Robinson. The film is the fruition of a dream of Kirsty’s that started when she began to write a script when she was just 14 years old and she was there in person to give a brief introduction; she was most humble in her genuine desire that the audience enjoyed the first public showing of her film in its home town, which featured heavily throughout.

The film follows several generations of women, all of whom are struggling in their own way. Their lives are intertwined through a network of friends and family and in many ways, the film gives a stark portrayal of the everyday lives that go on behind closed doors up and down the land. People become wrapped up in their own problems and don’t always recognise the needs of others, sometimes with disastrous consequences. The moral is that sometimes all that is needed is for someone to be there and the film suggests that, in true British style, the solution to everything from bullying to loneliness and even bereavement can be found in a nice cup of tea.

This is a low budget movie and it is a little rough round the edges, but so is the subject matter and there is a certain edginess to it that makes it extremely watchable. The acting, too, is unpolished but this gives a rawness to the characters which makes them all the more believable. A noticeable exception is Alice Pitt-Carter, whose drama school training stands out amongst a cast of local teenagers drawn predominantly from local stage schools. They have every reason to be proud of their involvement in the making of Tea and Cake, a film that has put Ms Robinson and Henley firmly on the map!

Jo Southwell, Founder of the Festival said, “The third Henley Film Festival was really well received – not only by those involved with Tea and Cake but by local film makers and audiences alike. We are delighted to announce the winners of this year are:

The Rising Star Award is supported by a film trust which seeks to offer opportunity to up and coming film makers.”