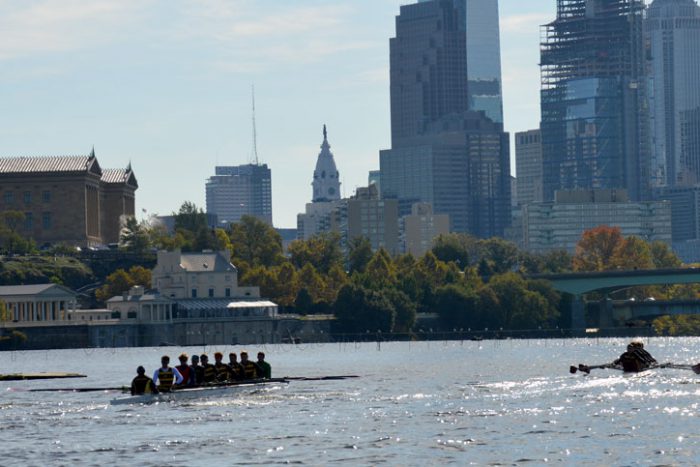 During the half term break, Shiplake College senior rowers from Years 12 and 13 travelled to Boston, America, to undergo intense training and compete in prestigious rowing events across the pond. Accompanied by Head of Rowing Mr David Currie, Mr Hugh Mackworth-Praed and Mr Peter Muhley, the group headed to the States for two weeks of hard work.

The boys were staying with host families in Boston during the first week: after finding their feet and training on the Charles river, the boys met their host families. The trip opened with a challenging rowing workshop; the group worked on strength and communication, and even visited the Harvard stadium and boathouse, to race up and down the steps and take advantage of the state-of-the-art rowing facilities housed there. Alongside some less arduous sightseeing, the rowers raced in the highly competitive Head of the Charles regatta. This prestigious two-day event sees rowers from all over the world compete on the Charles river, in the world’s largest regatta. In an exceptional display of hard work and brilliant rowing, the Shiplake crews did superbly. The double of Charlie Rollet-Manus and Seb Newman came third, beating many schools and colleges into the top three. The 4x, made up of Ben Pogmore, Ben Gruchow, Fred Peck and Oliver Newton, rowed in an Olympic category and came a very respectable 16th, whilst the Eight, made up of Christian Hjortland-Marks, Will Dolin, Henry Blois-Brooke, Henry Birdsey,  Austin Burnand, Jamie Pond, Tom Scott, Marcus Colao and Alastair Holborough came 36th. Shiplake coach Mr Mackworth-Praed also competed, proving highly inspirational for the boys as he won his category! The crews also rowed alongside the ‘Great Eight’; so-called as it is a crew made up of Olympic medallists!

After an eventful week in Boston, the group headed to Philadelphia, making a fly-by visit to New York to see the world-famous Times Square. After a whirlwind stop in the big apple, the group moved on to Philadelphia, where they were staying with new host families for five days. As well as visiting the Princeton boathouse, the crews trained with host school St Joseph’s Prep, and even went to watch their Friday Night Lights rugby game! The rowers also underwent intense training ahead of their next race, the Head of the Schuylkill. Launched in 1971, the Head of the Schuylkill race aimed to open up the sport of rowing to graduate oarsmen and newly emerging womens’ teams. Having grown astronomically in size, the event (now a two-day affair) welcomes thousands of competitors and spectators. The Shiplake crews were amongst these, and again put in an exceptional performance. The 4x won their race, the Eight were the fastest UK crew, coming seventh out of 70, and the Double came 11th out of 31 crews. Captain of Rowing, Christian Hjortland-Marks, commented: ‘it was an amazing trip and we’re all so glad we got to go. There was a lot of training which was really hard work, but really rewarding. The racing was definitely a highlight; it’s also tough racing established schools with strong crews but I think we all gave it everything we’ve got.’ Mr Currie added: ‘with these strong performances this early in the season, I am very positive about the future of the senior rowers! The season is just beginning and it look as though it’s shaping up to be a good one!’

HAHG Lecture: From Gough to Google – The Development of Printed Maps of H...
Scroll to top