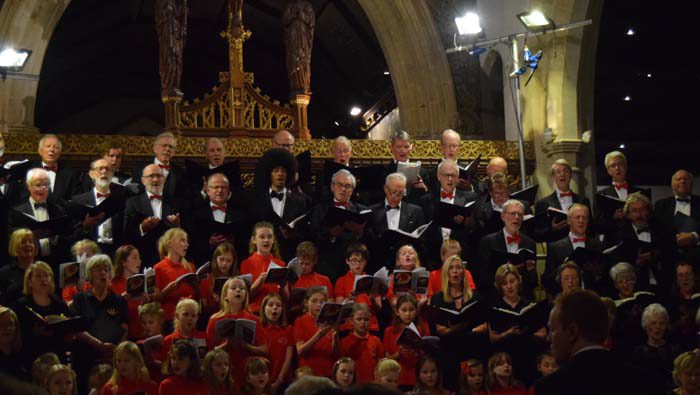 No festive season is complete without a carol concert or two, and on Saturday (10 December), Henley Choral Society and Henley Youth Choir gave a performance to bring some Christmas cheer to St Mary’s Church. With the help of Onyx Brass, pianist Anita D’Attellis, organist Daniel Moult and conductor Peter Asprey, the choirs combined for ‘A Christmas Celebration’, featuring traditional carols, with an occasional twist.

Conductor Peter Asprey provided commentary between songs, full of anecdotes and puns, along with historical context for each piece. His presentation gave meaning to the music, ensuring that each section of the concert flowed into the next effortlessly.

Henley Youth Choir, comprised of two groups (Junior and Senior) of 7-17 year olds, were a joy to behold. Accompanied predominantly by Anita D’Attellis on piano, the children displayed their mastery of the music, breaking into harmonies and rounds for a few complex carols. They set a high bar for the adults, but the Choral Society did not disappoint.

From their first carol, the Choral Society were utterly captivating. Much of their segment was performed a cappella, their impeccable harmonies echoing through the church as the music swelled. To contrast with the haunting ‘In the Bleak Midwinter’, they delivered a fantastic version of ‘Ding Dong Merrily On High’. Resisting the temptation to join in was a struggle, but it would’ve been a shame to ruin such flawless high notes!

Instead, the audience were invited to accompany the choir during three carols – O Come All Ye Faithful, Good King Wenceslas, and Hark! The Herald Angels Sing. Although the words and tune remained the same, each was played in by the organ and Onyx Brass, which made the traditional tunes feel particularly special.

Audience participation did not stop here, as Onyx Brass included an inventive slant within their Jingle Bells/Deck The Halls mash-up. Fresh off a plane from Borneo, the quintet instructed the crowd to find their keys, and shake them at specific points throughout the performance. This was a wonderful way to include the audience within the song, which also created a surprisingly effective jingle bell sound. The group were a delight, describing it as an “honour” to be a part of the concert. Indeed, as they so accurately put it – “if anything’s going to perk you up after a long flight, it’s listening to these singers behind us.”

A collection was made after the concert for No. 5, a self-funded charity that provides support for young people with mental health issues. Based in Reading and the surrounding area, No. 5 helps 10-25 year olds, along with their family and carers, who are experiencing psychological and emotional difficulties such as depression or anxiety.

If you are interested in joining one of the choirs, they rehearse on Monday evenings during term time at d:two, Market Place, Henley-on-Thames. A non-auditioned choir, they perform at a variety of events throughout the year. For more information, please visit their website: www.henleychoralsociety.org.uk