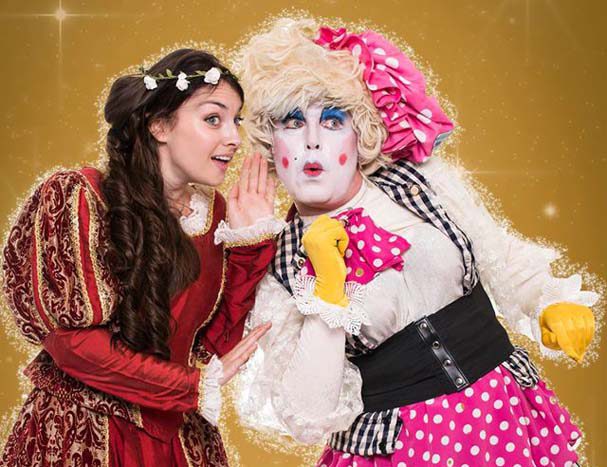 It is the fifth production by the talented team of Ian McFarlane (writer and director) and Oli Seadon (producer).  Back again this year from last year’s Jack and the Beanstalk cast are Hannah Pritchard (Princess Bea), Thomas Ford (Prince Aldopho) and the brilliant panto dame,  Matt Ian Kelly as Dame Trott.  Joining the cast this year are Kieran Parrot as Prince Felix, Annabel York as Fairy Midnight/Fairy Light and Jonathan Vickers as Jasper the comic Jester.

The panto tells a very different story from the original, with Princess Bea (short for Beauty) about to celebrate her 24th birthday and opens a gift from her deceased parents which includes a letter that says she must marry Prince Aldopho who she doesn’t love.  The story continues with Princess Bea showing her determination to create her own destiny.

Bad jokes, slapstick, the classic panto audience shout outs and a sing song are all part of this great show.  We particularly liked the wedding pie scene with the Dame and Jasper  – we would have liked to see more slapstick from this comic duo.

There were some very funny modern references including hiring an Uber, Donald Trump, Wikepedia and even Honey G!  Magoos in Henley got a mention too and there were plenty of hilarious innuendos for the adults in the audience.

Clever staging and costume changes – Annabel who played both Fairy Midnight/Fairy Light did brilliantly to swap rapidly from one character to another!  We loved the funny forest trolls scene in the second half.

The music was provided by musicians Alex Beetschen on piano and Robert Carr on drums and percussion.  Songs included a rewritten version of When I Grow Up from the Matilda show and It Must be Love by Madness which got the audience singing along.

The spinning wheel from the classic tale features in the final scene in the forest with a very different twist and spin (no spoiler here) which sees Princess Bea make her own “life story” – the moral of this very entertaining show.

Tickets are still available for some shows.  To book go to www.kentontheatre.co.uk/