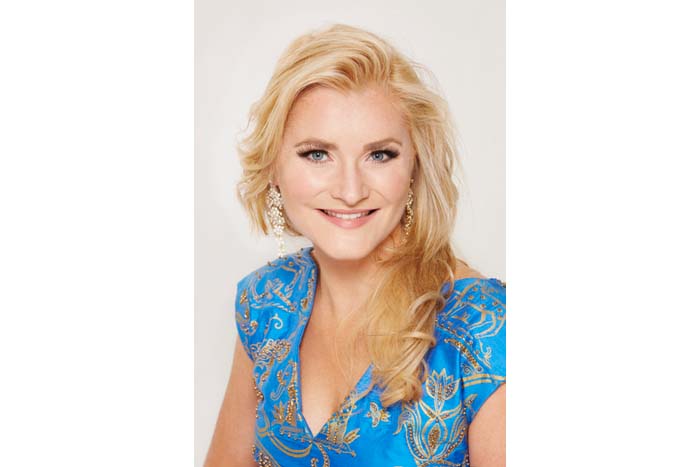 Peter Asprey, Henley Choral Society’s Director of Music, has secured an outstanding line up of soloists and a renowned orchestra for his first major concert with the choir since he started in September 2016.

Taking place on Saturday 25 March at 7:30pm, St Mary’s Church, Henley-on-Thames the choir will perform the dramatic mid-Baroque classics;  Purcell’s Dido and Aeneas and Vivaldi’s Dixit Dominus, alongside leading sopranos Samantha Crawford, who will perform the role of Dido , Queen of Carthage with Lauren Zolezzi singing the part of Belinda, Dido’s sister.   The role of Aeneas will be sung by international award winning baritone – Matthew Durkan.   Mae Heydorn, acclaimed as a mezzo soprano whose “cut and amplitude of timbre puts her at an advantage” (Opera Magazine, January 2016), will be taking the part of the Sorceress.

Samantha Crawford (pictured) has recently won the prestigious Wagner Singing Competition and will  bring so much  depth and power to the role, contrasting with the vocal agility of Lauren Zolezzi.

Sealing the exceptional high standard of performers for this concert is The Brandenburg Sinfonia, one of the most versatile musical organisations in the country, which will accompany the choir and the soloists.   They will also perform the well- known Pachelbel’s Canon and Gigue.

Samantha Crawford –soprano – Samantha Crawford has performed in operas and concert extensively across Europe, appearing at Glyndebourne, Teatro Real Madrid, Edinburgh Festival, Scottish Opera, Aldeburgh Festival, Garsington Opera, Wigmore Hall, Barbican, Wales Millennium Centre with the BBC NOW, and at Schlosstheater Schönbrunn, Vienna. She trained at the Guildhall School of Music and Drama and is the recipient of numerous awards including First Prize at the 2016 Wagner Society Singing Competition.

Lauren Zolezzi –soprano – Lauren is a graduate of the Guildhall Opera Course, the Royal Academy of Music MArts (Performance) and completed a Fellowship in Movement Direction at the GSMD. She is a receipient of the Joan Sutherland and Richard Bonynge Vocal Scholarship and has performed as a soloist in venues such as the Sydney Opera House, the Wigmore Hall, St. John’s Smith Square, St. Martins-in-the-Field, the Royal Shakespeare Theatre and The Barbican Concert Hall.

Matthew Durkan, baritone – Winner of the 2014 Stuart Burrows International Voice Award and a finalist in the 2014 Kathleen Ferrier Competition, Matthew is a recent graduate of the National Opera Studio.

His 2016/17 season includes the role of Captain in Hartmann’s Simplicius Simplicissimus for Independent Opera at Sadler’s Wells and Marullo Rigoletto and Ormonte Partenope for the English National Opera.

Matthew previously studied at the Wales International Academy of Voice and at the Birmingham Conservatoire and, he continues his studies with Dennis O’Neill CBE.

Mae Heydorn – mezzo soprano – Mezzo soprano Mae Heydorn is winner of the Audience Prize at the London Wagner Society Singing Competition 2016.She graduated with distinction from the Guildhall School of Music and Drama as an Anglo-Swedish Society scholar in 2012 and she made her Glyndebourne Festival début the same year as the Woodpecker in The Cunning little Vixen.  On the concert platform she has performed Emilia Otello at St James Piccadilly, Phaedra with the Southbank Sinfonia at St John’s Waterloo, a recital of Rachmaninov songs in Russian at the Barbican Hall and she was the alto soloist in The Messiah with the English Chamber Orchestra at Cadogan

This concert is not to be missed and filled with drama and surprise – look out for members of the Henley Youth Choir who will also be making an appearance during the concert dressed as witches.

Ticket prices are £18 for adults and £8 for children under 16 and available on-line through the choral society’s website – http://www.henleychoralsociety.org.uk/ or call 01491 572795 or from Gorvett and Stone.