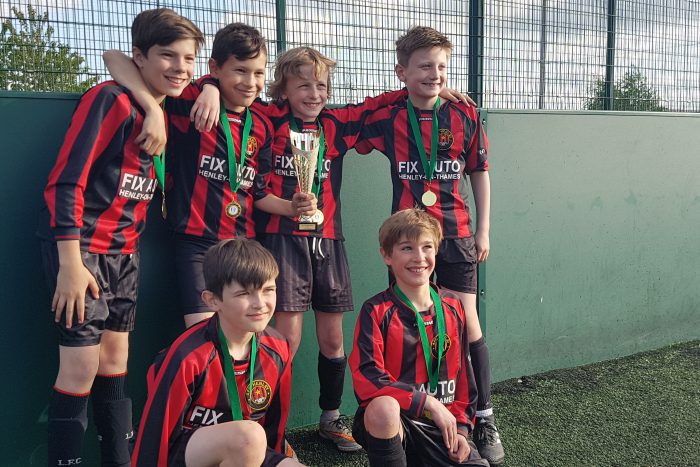 The Under 10 AFC Henley Hurricanes came out victorious from a fiercely contested 5 a side tournament in Woodley.

It was a historic day for the Hurricanes as they won their first piece of silverware and it was richly deserved after they remained unbeaten throughout the tournament.

Their first match saw them go up against a physically strong team who had previously defeated the Hurricanes. However they were not to be overawed and their quick passing saw them go into an early lead as Tom Atkinson finished clinically after good work by Joe Turner. Atkinson then scored another as he led his team to an opening 2 0 victory which was to set the tone for the day.

The next two league games resulted in two more victories, 1 0 and 3 1. Captain Nicolai Bruun-Andersen excelled at the back for the Hurricanes as not only did he snuff out any openings the opposition had but he also had the peace of mind to break forward at just right the time in a performance Chelsea’s N’Golo Kante would have been proud of. Finnbar Scott, Bruun-Andersen (via a penalty) and Joe Turner all added to their goal tallies with Tom Bonser leading the assists.

The 100% record of the Hurricanes in the Group stage led them to the Champions League stages as they battled against 4 other Group winners in another League format.

The first match saw them run out comfortable 2 1 winners. Joe Turner notched in this game after combining well with Tom Atkinson and Bruun-Andersen was also on the scoresheet.

The second game was a tight affair as the Hurricanes had to battle to a 1 0 victory as Luca Thomson scored the only goal of the game with a powerful strike. Finnbar Scott donned the gloves for the Hurricanes in this game and he excelled between the sticks operating as a sweeper keeper and showing great strength and tenacity to keep a clean sheet.

The third game ended in an agonising 2 2 draw as the Hurricanes raced into a 2 0 lead only to see it slip as an own goal and a good finish saw the game finish in a draw.
The fourth and final game amounted effectively to the Champions league final, the tension of which rivalled the El Classico, as the Hurricanes were up against a very strong Burghfield side whom they had been beaten by on a number of occasions previously.

However this was their day and they would not be denied as they started confidently with Atkinson notching early on with a predatory strike to settle the nerves. Thomson also got on the scoresheet as the Hurricanes went into a 2 0 lead. However, Burghfield struck back to make it 2 1 to make it a nerve jangling finale. The Hurricanes held out though to send their army of travelling fans into raptures and claim the Champions League trophy.