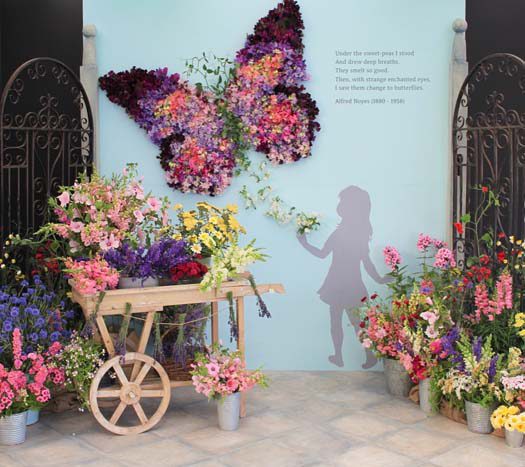 British flowers grown by Bosley Patch in Henley were part of a winning stand design by local florist Jo Wise of Floral Circus at the The RHS Hampton Court Flower Show last week.  Jo was asked to design the stand for a collective of British Flower Growers – Flowers from the Farm which Bosley Patch is a member of.  Jo’s stand design won a Silver-Gilt prize.

The theme was mini beasts and bugs’ Jo said, “I immediately knew where to look for inspiration as a few months earlier my friend (local make up artist Jade Soar) had shown me a beautiful poem by Alfred Noyes (1880-1958) Noyes is best known for The Highwayman which used to be largely studied in schools. This poem isn’t so well known but utterly charming, A Child’s Vision.

“I designed the stand and submitted it and only found out much later, once the design was circulated around Flowers from the Farm, that the grand-daughter of Alfred Noyes was a flower grower herself and a member! I also only found out much later too that Alfred Noyes wrote persistently through the 1930’s about the concerns he had about commercial growing of flowers costing them their scent. British grown flowers often have a much stronger fragrance then imports – so this added connection to Flowers from the Farm was a wonderful surprise.”

Flowers from the Farm was founded in 2011 and now has over 500 members.  They are a not-for-profit network run and administered solely by volunteers. Most members are sole traders running small or micro businesses: farmers, smallholders and gardeners, who are using their knowledge of horticulture and floristry to grow and present a different range of flowers from those available in the supermarkets and the wholesale markets.

Bosley Patch is run by Tamsin Borlase at Swiss Farm where she not only grows flowers but vegetables too.  Her flowers are available from the shed at Swiss Farm or on her market stall every Friday in Kings Road car park with her vegetables and delicious bakery products too. She’ll be moving her stall to Lovibonds in the Greys Road car park from 4 August when the development starts on Market Place Mews.

Jo concluded, “I was thrilled that both his grand daughter and daughter, plus 2 great grandchildren went to see the stand. I was emailed a picture of his daughter with the silhouette of the young girl day dreaming behind her. It brought a tear to my eye as I imagined the poet writing about his young daughter and their she was, painted by me, 75 years later. What a lovely moment!” 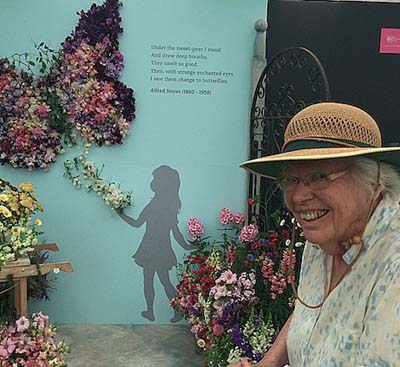 Three Men Arrested on Suspicion of Rape
Scroll to top