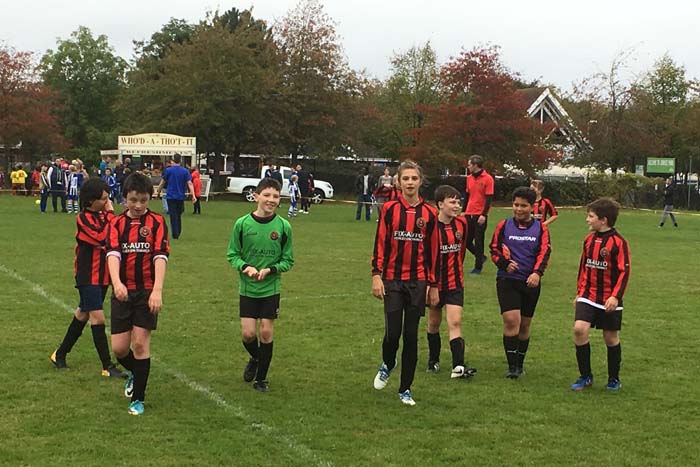 On Saturday 7 of October, the Hotspurs won their first cup game, against Caversham Trent Whites. The score was 2-1 after a penalty shoot-out, with two crucial saves from Matthew Laing, who was deservedly chosen as “man of the match”.

On this slightly windy but dry early Saturday morning, the U12 AFC Henley Hotspurs had a troublesome start with their home game. Straight from the beginning the team struggled with their positions during attack. This resulted in half a dozen or so interventions by the referee for offside. To everyone’s frustration, three Hotspur goals were disallowed because of this. The disruptions greatly hampered the flow of the game, and players were becoming increasingly irritated. To make matters worse, the opponents scored after about 10 minutes. They proved a very strong and dangerous side. Not only did they defend superbly, they were also excellent in taking free kicks – of which there were far too many in our opinion! Nevertheless Noah Allen showed some great skill on the ball, accelerating towards goal from the left several times, but failing to convert. Roman Meredith did a solid job on midfield, not only hoovering up balls coming AFC’s way, but also proving invaluable during attack. Towards the latter part of the first half, activity in front of the Hotspur’s goal gradually increased. Eventually the opponents, who also proved very strong “in the air”, scored from close range. The last part of this half saw some attempts at goal from Barnaby Burletson and Noah Allen, but Caversham defended impressively. But then, just before the half time whistle, Kit Daly took Caversham Trent Whites by surprise: despite being surrounded by their defenders, he curled the ball into the left top corner, making the score 1-2 at half time.

In the second half, Matthew Laing made a good save about 10 minutes into the second half. Shortly after that, Noah Allen managed to score AFC Henley’s second goal. From that moment onwards, the match started to flow much better for the Hotspurs. Almost immediately after, Barnaby Burletson managed to score following a brilliant pass from Roman Meredith, bringing Henley ahead with 3-2.

The opposition now really started to fight back, and Hotspurs had to dig deep. The midfielders had to step in defensively to keep Caversham away from the goal. About halfway the second half, the Trent Whites shot hard at goal but missed by a whisker. With the other side now aggressively attacking, their play became less compact. A much more open and exciting game therefore emerged. Caversham created quite a few chances, with one shot at goal hitting the bar. Hotspurs in the mean time kept being harshly penalised by small mistakes: a Caversham throw-in almost resulted in another goal for them. Shortly after, what was perceived as a “hand ball” by the referee, resulted in another dangerous free kick towards our goal. All this was taking its toll on Henley, and in a brief moment of miscommunication between the players, the opponents scored, making it 3-3, which was also the score at the final whistle.

The teams now had to continue with a penalty shoot-out to determine the winner of the match. Memories from last season surfaced, when this Hotspurs team narrowly lost on penalties in the quarter final.

This penalty shoot-out was a complete nail biter for coaches and onlookers alike. The players from both sides must have been equally nervous, because several of them hit the ball over the net, and only one player each side managed to score in the first round of 5, including AFC’s Barnaby Burletson. Matthew Laing, sill in goal for Henley, managed two absolutely stunning saves, ensuring a score of 1-1 after a round of 5 penalties. This meant however, that the teams had to continue to sudden death…

Although some spectators could not deal with the pressure and covered their eyes, hopes surged when Caversham player nr. 6 shot the ball over the goal. All eyes were now on the AFC Henley penalty taker nr 6. It was Thomas Gahan-Munro. He stepped forward. He took his time. He stared at the goalkeeper. He looked at the ball. And cold as ice he shot. AND SCORED!!!!!

A fantastic result, congratulations Hotspurs! Showing real nerve and stamina by coming back from 2-0 down, and then beating the other side on penalties. A bit of practice on attacking positions and penalty kicks, and then …. bring on the next cup game!