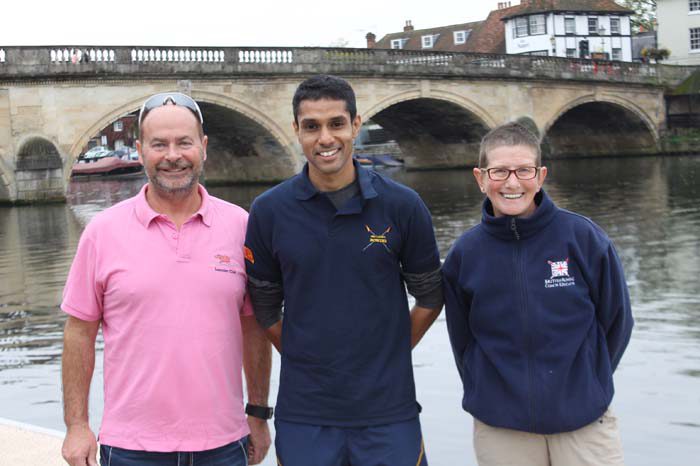 For the first time Leander Club has invited a rowing coach from Sri Lanka to witness their high-performance programme in action this week.

This initiative is the first part of Leander Club’s bicentenary celebrations next year and is a partnership formed between the club, the FISA (World Rowing Federation) and British Rowing.

Kushal Abhayaratne was chosen from several international candidates that were shortlisted because of his experience of rowing in national and regional competitions and being a senior coach in the Sri Lankan team that has been recognised through an Olympic Solidarity Project as being a leading coach by FISA experts.

Mark Banks, Director of Rowing at Leander Club said, “Leander Club is the most successful rowing club in the world with 123 Olympic medals and we approached British Rowing and the FISA to offer an opportunity for one of the world’s young, upcoming coaches to experience working with us and we’re delighted to welcome and host Kushal for a week.   Kushal has seen firsthand our training routine both on and off the water.“

Sallie Malt, Development Consultant for FISA has been accompanying Kushal during his week in the UK.  She said, “Kushal has also not only experienced the high performance training programme in action at Leander Club, he has been to the Redgrave and Pinsent Rowing Lake in Caversham  where the GB rowers train, Bisham Abbey where other sport athletes train plus some grass root level rowing clubs both in London and in Henley (Henley RC and Upper Thames).  A visit to Henley wouldn’t  be complete without a visit to the River & Rowing Museum too.  This has enabled Kushal to gain a real broad experience to take back and use what he has seen and learnt.”

Kushal said, “I felt fabulous and over the moon when I heard I had been chosen.  I think it will allow us to take rowing in Sri Lanka to the next level.  It’s been a really good opportunity and I’ve gained a lot of knowledge of a high-performance programme. This can be shared with not only the national team but also with grass root level college and club teams so that the overall standard improves. I’ve learnt so much.  Even the things we thought we knew how to do, I’ve learnt that there are completely different sides to and more simpler ways of doing things for example methods of crew selection.”

Over the week Kushal has seen lots of differences in the approach to rowing in the UK.  The main two he said were, “The high performance training programme has a much bigger mix and volume and we need to look at talent identification differently.   In Sri Lanka we need to get people to go out look for new talent in new areas not just in the rowing clubs or schools.  Sallie commented, “In the UK we have a ‘Start’ outreach programme that goes out to find people in schools, universities, sports clubs who have the potential but who perhaps have never been in a rowing boat before.”

Sri Lanka has a long history of rowing which was introduced to them by the British in the 1860s but has never competed at Olympic level.  Kushal said, “We have a very optimistic 4 year plan now.  In 2019 we hope to win a medal at the 2019 Asian Championships and qualify in the Asian Olympic qualifications in 2020.”

Mark Banks added, “We hope that this initiative will be pinnacle in helping Sri Lanka’s rowing achieve their next goals.  It’s a first step for all of us, but something we would like to repeat in the future.”