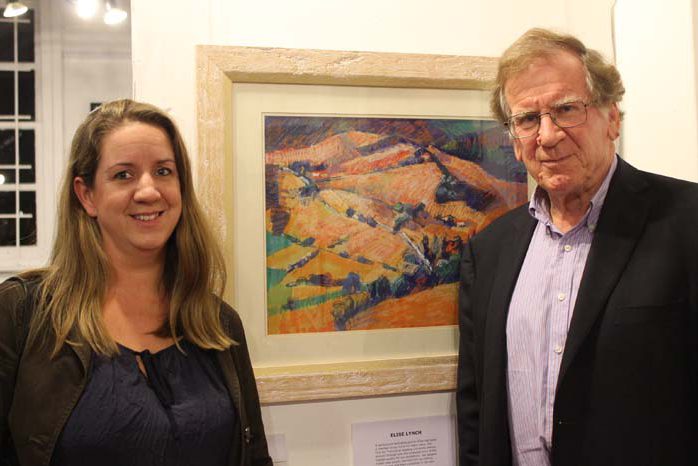 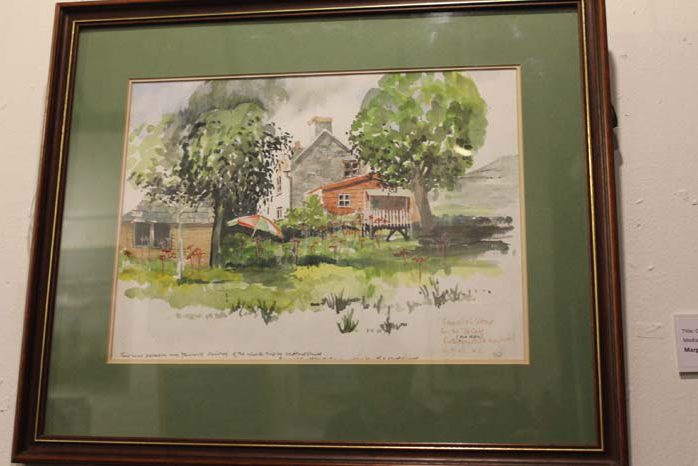 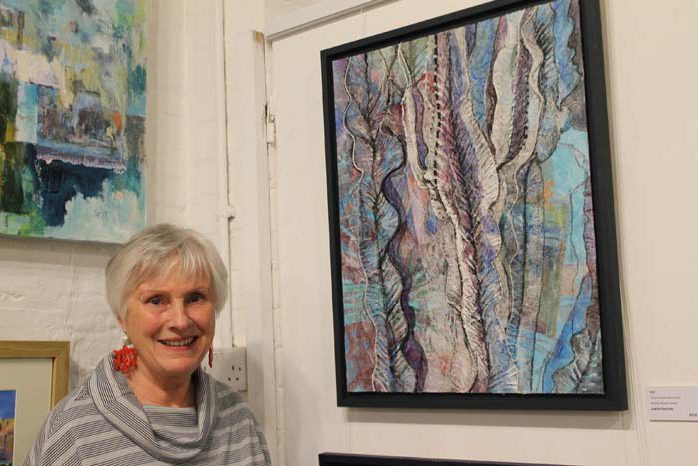 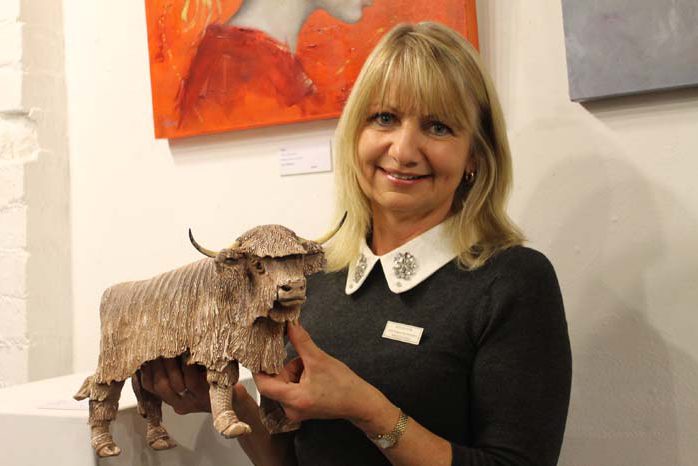 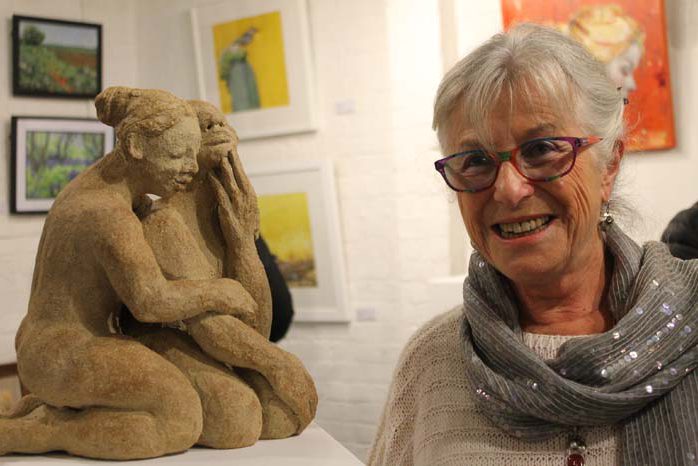 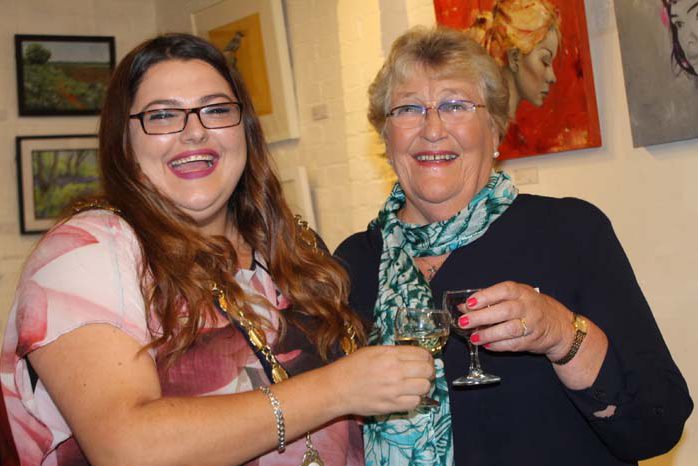 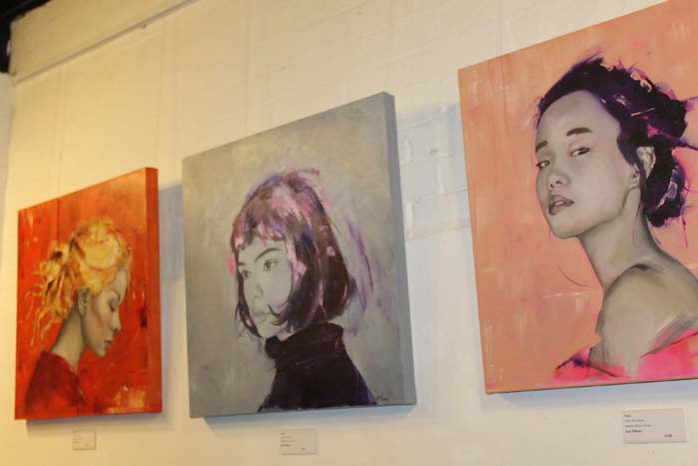 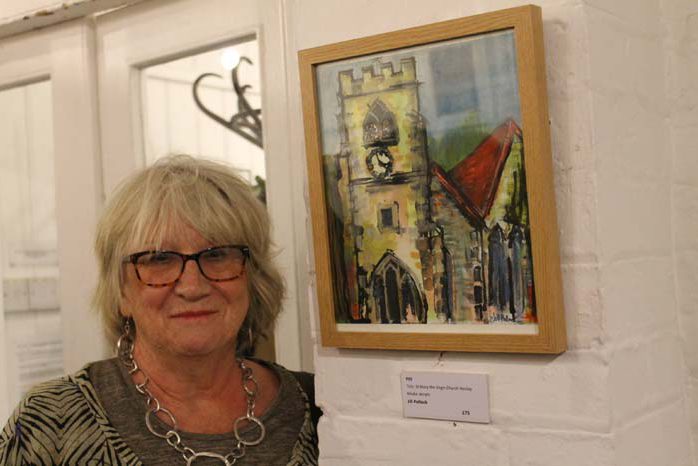 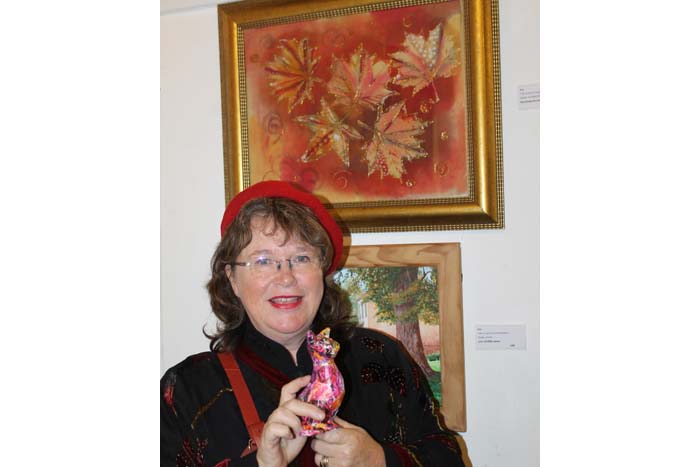 Members of the Henley Art & Crafts Guild opened their Autumn exhibition on Friday evening with a member’s reception with guest of honour, the Mayor of Henley, Councillor Kellie Hinton.

The exhibition was also paying tribute to two members, Margaret Simister and Elise Lynch, who sadly passed away recently with two of their pictures on display. Margaret’s picture “Café garden on the banks of the River Wye” was painted during a painting holiday in 2009 where a group of friends (all over 50) stayed in a youth hostel!  The legend on the painting reads, “This was my favourite painting of the whole trip to Herefordshire.  An absolutely glorious day by the River Wye.”  Margaret never thought her her paintings were worth exhibiting or selling though often if she had painted a picturesque cottage, the owner would insist on buying the finished results!

Elise Lynch’s husband, Tony, and their daughter Liz Thornber, were at the reception on Friday evening.  Elise was a member of the Guild for over 40 years.  One of her landscape picture was on display.  Liz said, “She mainly painted landscapes although she was really good at portraits.  She didn’t do enough of these.” Tony said, “One of her favourite things to paint was a harbour with boats.  Many a time on a holiday, she would ask to stop the car on a windy road to take a photo or ask to do sketch.  She loved to exhibit her works every year in the Guild exhibitions as well as in London and Oxford.  Her favourite mediums were oil and pastels.”

Chair of the HACG Anne Spicer said, “Very honoured to be remembering Margaret Simister and Elise Lynch, our late members of the Guild who we sorely miss.  Word of thanks to the super duper committee who put the exhibition up.  We weren’t sure whether we’d be able to have the opening reception this evening after a smoke alarm went off which we just couldn’t stop.  Luckily a fire engine passed by which we flagged down and they helped us stop the horrendous noise.”

Henley Mayor, Councillor Kellie Hinton said,  “The Henley Arts & Craft Guild is great community and the Henley Arts Trail is a big date in everyone’s calendar.  It is so wonderful to be here at opening of the Autumn exhibition. I think appropriate it’s appropriate to give a toast this evening to Elise and Margaret.”

Judith Fletcher from Hambleden exhibited a number of mixed media artworks.  We loved the one entitled ‘Enchanted Forest’ which was a mixture of tissue paper, string, corrugated card and Polyfilla with ink dripped on top.  Judith said, “It was a new experiment for me which was inspired by cacti with all their curves and strange shapes.”

There were a number of ceramic pieces on display.  Alison Pink exhibited a number including her delightful ‘Cow’, a Highland cow which was created from a slab technique and then texture and imprinted added.  Alison said, “I love Highland cattle as they are so expressive and have lots of texture to them.”  Diana Cole, created her “Help (I Love You)” piece which was inspired and in memory of her sister who sadly passed away.  I found out that afterwards that she was in love with a well known artist.”

Jill Pollock from Emmer Green exhibited an acrylic painting of St Mary’s Church, Henley.  Jill said, “I love to paint churches and this one is a great composition with the red roof which makes it attractive.”

The Henley Art and Craft Guild have three exhibitions a year at the Old Fire Station Gallery and a series of workshops, talks and outings throughout the year. This exhibition closes today (Tuesday) at 4.30pm.  More details can be found at http://www.henley-art-crafts-guild.org/

Autumn Fair Raises Over £2000 for Church
Scroll to top