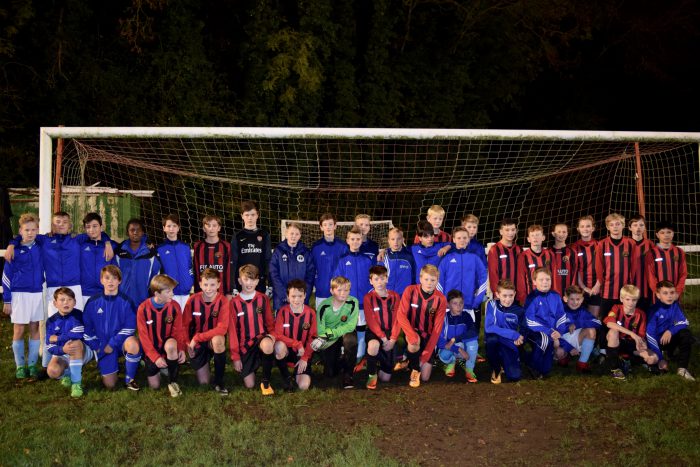 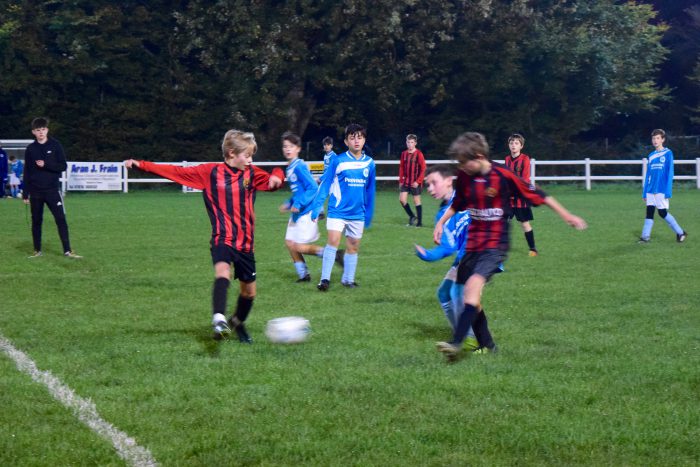 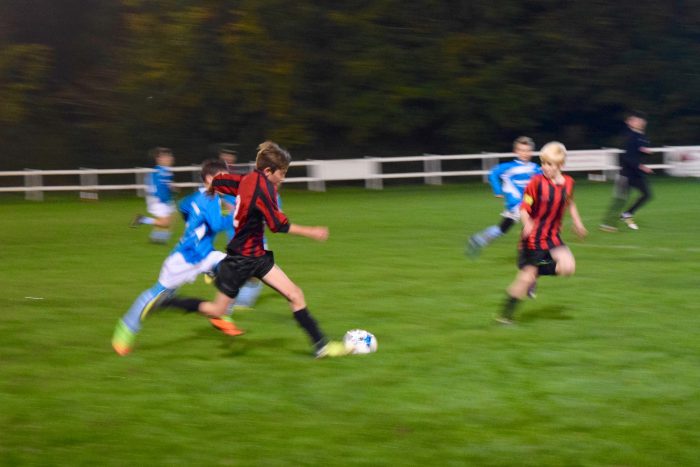 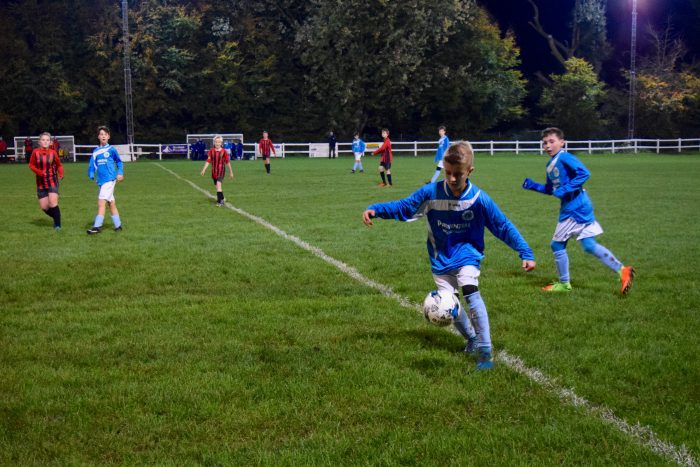 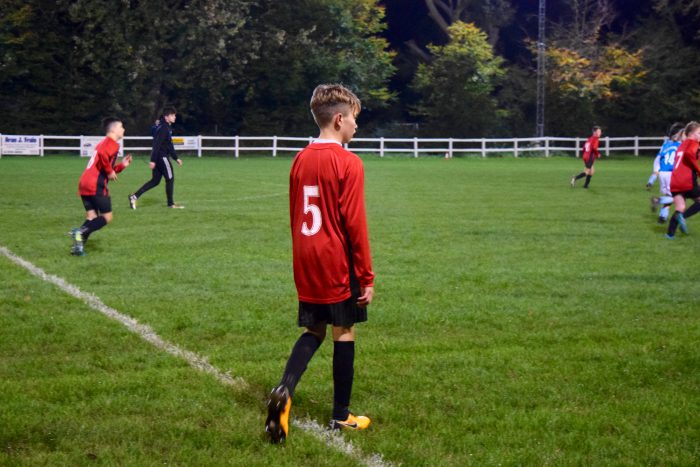 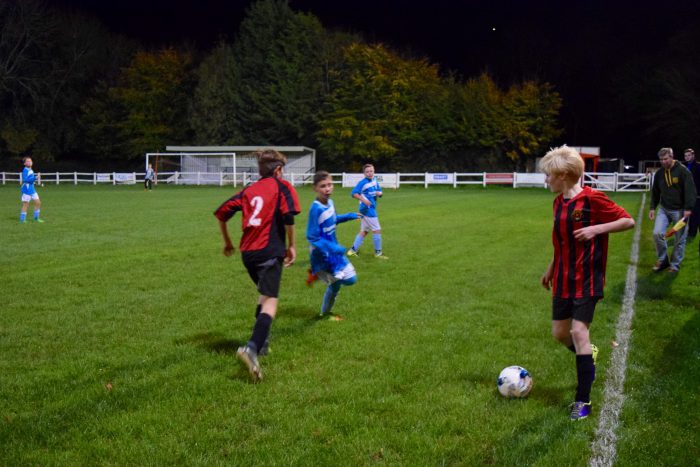 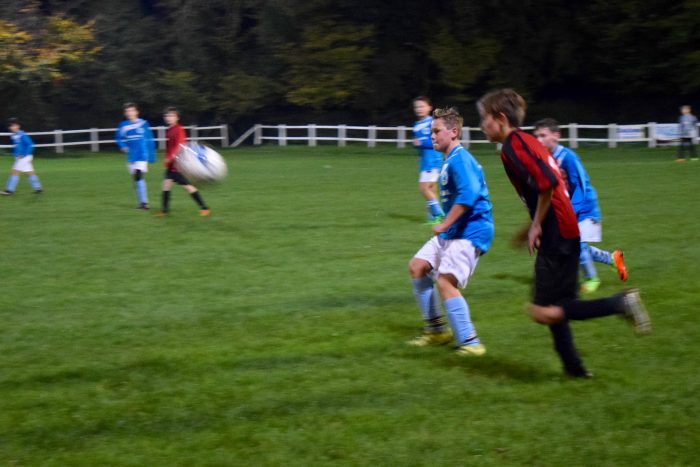 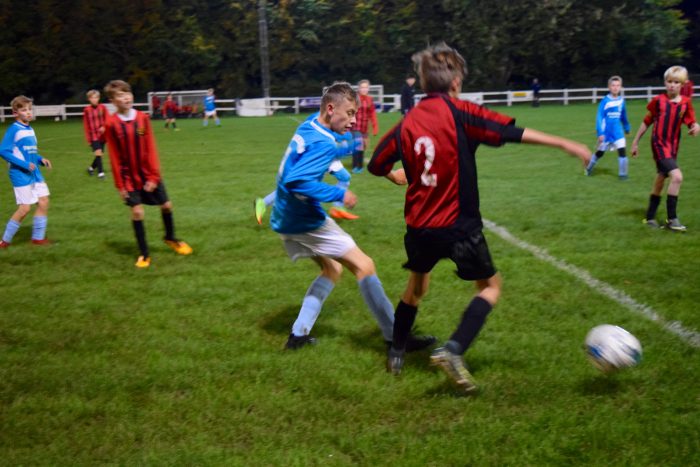 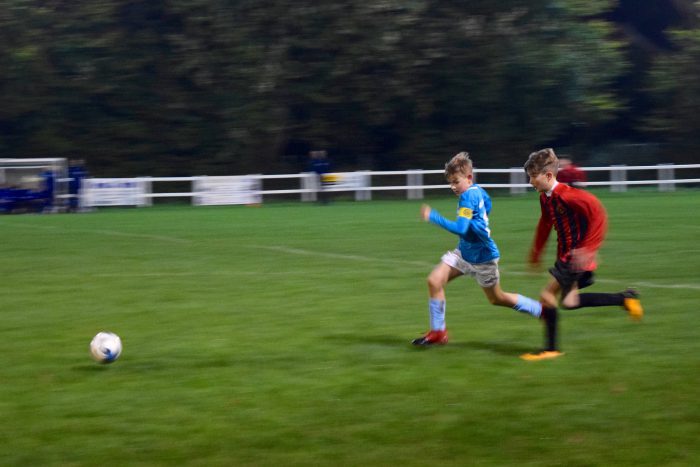 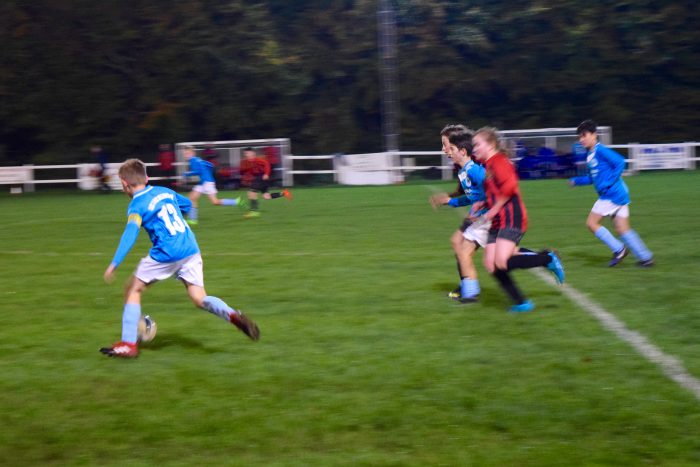 This weekend, AFC Henley celebrated the Henley-Leichlingen Twinning Association (HTLA) with a fantastic football tournament for U13s. AFC Henley was one of the first Henley groups to establish a sporting link with Leichlingen, Germany, over 30 years ago (1983) and exchanges have taken place annually ever since. This year was no exception, when a group of 19 U13s, plus another 19 coaches, parents and siblings, from SC Leichlingen arrived during the October Half Term as guests of the club. The players were hosted by families, while the rest of the party stayed at the Catherine Wheel in the town centre.

This year, the two U13 teams met on the Friday evening at Henley Town’s Triangle ground to compete for the Dukes Shield. It was a close-fought game, each team giving it their all in the hopes of walking away victorious. In the end, it was AFC Henley who came out on top, winning 4-3. Henley’s Deputy Mayor, Lorraine Hillier, attended the big match and the post-game reception. After a welcome speech from Trevor Howell, Chairman of AFC Henley, she was invited to present the Dukes Shield to the winning team. More football followed on Saturday afternoon at Jubilee Park, when the English and German boys were put into mixed teams for a knock-out tournament. A celebratory farewell party was held later that evening at Shiplake memorial Hall.

The Henley-Leichlingen Twinning Association was founded in 1979 with the aim of fostering friendship and understanding between the people of Henley and those of Leichlingen, a small town situated on the River Wupper in the Rhineland. Regular group exchange visits are arranged between members of the two towns’ twinning associations and other visits, especially by young people, are encouraged so as to broaden the understanding of the sporting, musical, educational and commercial activities of the two communities. Visitors in both directions usually stay with families in the town and many firm friendships have developed as a result.

Next Easter it will be AFC Henley U13s’ turn to travel to Leichlingen where they will take part in the annual Osterturnier (Easter Tournament), which attracts teams from a wide area. Before that, on the Thursday evening, they will play a return 11-a-side match against Leichlingen on the club’s new 3G pitch.

An exciting game played in a great spirit!

The first footballing event of the annual U13 football exchange weekend, between AFC Henley and SC Leichlingen, took place at the Henley Town football ground, on Friday 27th October, kicking off at 19:30.  It was a cool evening, but the atmosphere was warm, with the two squads getting together for a pre-match photo.  The warm atmosphere continued through what was a competitive and high quality encounter, featuring all 19 travelling players, and representatives of the three AFC Henley U13 teams.

AFC Henley started the match brightly, with good breaks down both the right and the left.  After the opening 10 minutes, however, SC Leichlingen gradually got into the match, hitting Henley on the break on a number of occasions. Good defensive cover from Henley and some fluid breaks forward relieved the pressure and some great skills by Danny McAllister down the right almost resulted in a goal as he pulled the ball back from the touchline, only for it to run to the back of the 18 yard box and be cleared by the German side. This led to a break by Leichlingen, which was well saved by the Henley goalkeeper.

The game then fluctuated back and forth, before a strong run down the right resulted in Leichlingen squaring the ball to the top of the 18-yard box.  Maiko Ronchen’s looping shot beat the outstretched Henley keeper, to take a 1-0 lead for the visitors, slightly against the run of play. The lead didn’t last long, however, with a great ball down Henley’s left releasing Archie Smith to break clear of the Leichlingen defence and score a good goal for Henley. The match then began to turn in Henley’s favour, when shortly afterwards, Tyler Chidwick made a lightening break down the left, turning the keeper and drawing the foul for a penalty to Henley. Up stepped Danny McAllister to calmly place the ball to the keeper’s left.  The first half ended with Henley leading 2-1.

Henley started the second half strongly, making some good breaks.  Their pressure soon told, with Tyler Chidwick again breaking down the left and this time getting clear of the German defence before tucking the ball past the Leichlingen keeper.  However, Leichlingen didn’t let their heads drop with Finn Hake providing a neat finish to a nice move, taking the score to 3-2.

An even period of the match was ended when a free kick led to a run down the right, with the ball being pulled back for Luke Morgan to slot home, restoring Henley’s two goal advantage. Henley then increasingly put Leichlingen under pressure, but the German visitors again showed their mettle, with Maiko Ronchen running clear of the Henley defence to once more peg Henley back. The last 5 minutes were end to end, with AFC Henley managing to hold out and win a hard fought, high quality match, 4-3.

The evening didn’t end there, however, with Trevor Howell, AFC Henley’s Chair welcoming both sets of players and fans to the weekend’s events in both English and German, and the Deputy Mayor, Lorraine Hillier, presenting the winners’ shield to AFC Henley’s winning captain, Danny McAllister.  The positive spirit shown during the match then transferred itself to an evening spent in the Henley Town clubhouse, with parents, fans and players from both sides sharing a buffet, drinks and stories together. It was a great match and a wonderful start to the weekend’s events.

On Saturday October 28th, having spent a morning with their host families, the Henley and Leichlingenplayers were split into 7 mixed German and English teams, representing 7 European Clubs, including the visitors’ local teams – Bayer Leverkusen and FC Koln. Each match in the tournament was fabulously balanced and we were treated to a feast of skill and goals as the teams played a round robin format.

Players representing ‘Manchester United’ played ‘Bayer Leverkusen’, and ‘Real Madrid’ faced ‘Chelsea’ in the semi finals.  Both games were captivating and full of action with the Manchester United and Real Madrid teams coming out on top and making the final.

At half time, the Final remained goalless but early in the second half Archie Smith scored for Real Madrid.  Then, with just 2 minutes remaining, Danny McAllister equalised for Manchester United.  The last 2 minutes were frantic with both teams having excellent attempts on goal but the match ended as a one-all draw.  The crowd of 100+ players and spectators then gathered around the penalty area and were treated to the tension of a penalty shoot out. The shoot out ended 4-1 to Real Madrid and the players ran onto the pitch to mob the triumphant goalkeeper, Elliot Rowberry. The winning team, managed by Lee Vockins, included Maritza B, Nicki, Charlie Graham, Archie Smith, Tom Vockins and Elliot Rowberry.

Once more, the tournament was played in a wonderful spirit and was followed by a party for all players and their families at Shiplake Memorial Hall. This topped off a thoroughly enjoyable weekend with players and parents alike looking forward to the return visit to Leichlingen in the spring of 2018.