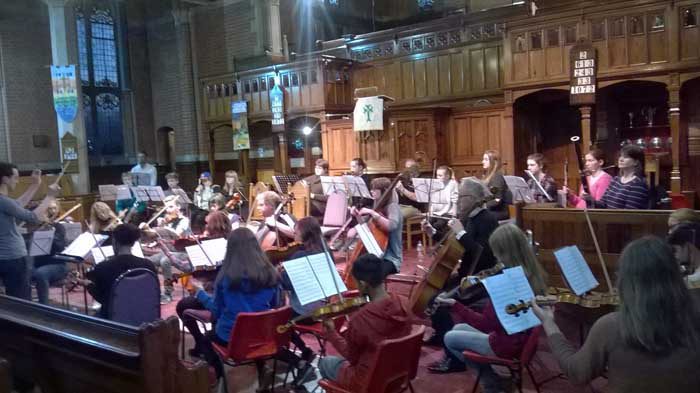 Last weekend was Henley’s turn to host the annual Henley-Leichlingen Music Exchange. On Friday evening, around 30 young German and English musicians aged 11 to 19 and four young solo singers descended on Christ Church Centre to start rehearsals for a full-scale concert on Sunday, attended by Henley’s Mayor, Kellie Hinton. An introduction was given by Patrick Fleming, Chair of the Henley Leichlingen Twinning Association, and the Mayor responded. The proceeds went towards the Christ Church Development Fund.

The programme – Philip Godfrey’s Orchestral Suite No. 1 in G Major and Haydn’s ‘Nelson’ Mass – was conducted by Matt Bamford.

Members of Henley Choral Society sang with the choir. The core of the instrumentalists was the joint youth orchestra, with gaps filled by members of Henley Symphony Orchestra and tutors from the twin towns.

Those of us fortunate to have witnessed the event were left incredulous as to how, from Friday’s standing start, they could have pulled off such a stunning, high-quality performance.

Led confidently by Marie Joisten (Leichlingen), the orchestra opened with Godfrey’s Orchestra Suite, its three movements described by Hampstead & Highgate Express as ‘A homage to the baroque and classical eras….  revealing an acute ear for period and style and a considerable gift for orchestration, which created some quite sumptuous textures’. We could not have agreed more.

And this proved incredibly satisfying for audience and performers alike, starting with something as basic as the modular arrangement of the performing sections. The numerically small, yet powerful, Invicta Voices were dispatched to the gallery, while the four soloists sang from a raised platform in the centre of the orchestra. A string quartet, formed from the front desks of strings, was tasked with picking up the more technically difficult passages. One’s eyes and ears were constantly on the move between these different modules of sound. The visual and aural effect was totally uplifting.

The Mass’s five sections (Kyrie, Gloria, Credo, Sanctus and Agnus Dei) were infused with spirited orchestral playing, as adrenalin and enthusiastic inexperience rose to the task, bolstered by the highly competent string quartet. It was a vibrant affair from beginning to end, bursting with signature Haydn energy and colour.

The lion’s share of the vocal solos fell to Bethany Cox (soprano), a graduate of Birmingham Conservatoire. Much of it was complex and ornate, and she acquitted herself beautifully. Alongside her, three students from London’s Royal Academy, Tabitha Reynolds (Mezzo Soprano), Robin Dick (Tenor) and Niall Anderson (Bass), were all first class. Anderson’s rich bass timbre in particular added real depth to the different ensemble permutations.

Matt Bamford handled the performance with consummate professionalism, and his choir was magnificent.

This twinning weekend was a perfect demonstration of the value of uniting different cultures through the Esperanto of music. Long may such events continue.