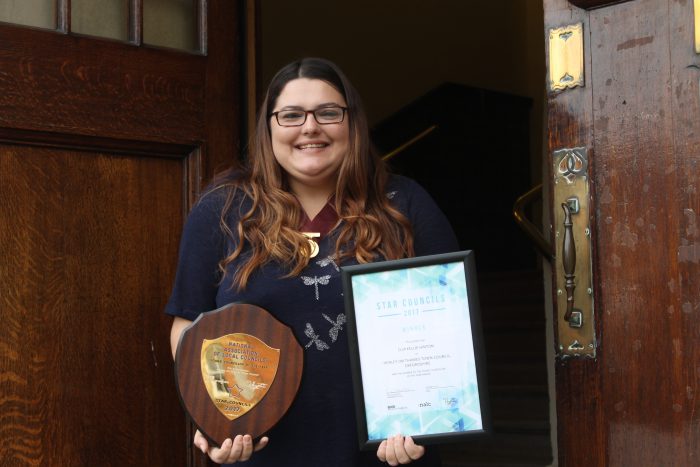 Councillor Kellie Hinton, Mayor of Henley-on-Thames, has won the prestigious title of Young Councillor of the Year, from the National Association of Local Councils (NALC).

Kellie is the youngest ever Mayor of Henley. She has been a councillor since 2011. She has also chaired Henley in Bloom for over five years, winning Gold Thames and Chiltern awards on many occasions as well as a National Gold in 2015 and Silver Gilt at the International Entent Florale that year too.

To celebrate Kellie’s wonderful achievement, the Henley Herald asked for a personal interview:

Congratulations on winning the NALC Young Councillor of the Year. Please tell us more about NALC and the Awards.

NALC is the only national body specialising in the work of local councils. There are six annual awards in total, which are designed to recognise the achievements of the local (parish and town) council sector. Each award, of which Young Councillor of the Year is one, leads to a shortlist of three. Everyone’s a winner! To make it to the shortlist is an achievement in itself.

What does winning this award mean to you?

I am hugely proud, stunned and delighted. This is the first time I have won a personal award. Up until now, I have received group awards, such as via Henley in Bloom and Britain in Bloom. However, this is not an award that is personal to me; I could not have achieved this without the incredible team that support me. Without them, anything I have done would not have been possible.

Who nominated you for this award?

Janet Wheeler, the town clerk. She wrote a wonderful account of my career to date with the council, highlighting my involvement in the Henley Skate Park, and my focus on working with the YMCA, the Youth Centre and schools in Henley.

How did you learn that you had been shortlisted for the award?

To my amazement, Janet told me she had nominated me for the awards and I had made the shortlist. To say I was lost for words would be an understatement! Being a councillor is a voluntary role. We don’t do it for the recognition, but to receive this award is something to be very proud of.

What did you receive for the award?

I received a badge to wear around my neck. It sits perfectly above the mayoral chain! I also received a certificate and the award itself which will go on my mantelpiece.

There were over two hundred people there. One of the most interesting things for me was the opportunity it gave to meet mayors and councillors from other towns. It’s very inspiring! You can bring back new ideas to your town. I spoke to several councillors who I had met previously from working on other projects, such as Henley in Bloom. It’s also very humbling to be in a room with other councillors, whose main concern is to give their time to make things better.

Who do you feel has supported you in your role as councillor and mayor?

Nobody can do anything on their own. Without the help and support of other councillors, the council staff, park services, the recreational team and Leena who coordinates the diary, I would not have been able to achieve the work I have done. We work together as a team to make things happen.

There is also my employer. I have a great boss at IBS Office Solutions Ltd. I need to be away from my desk a lot in order to carry out my role. Caleb has been very flexible about this, and it is hugely appreciated. I certainly would not have received this award, without his support.

Do you know why the judges selected your nomination for the award?

The judging panel said, “I really liked the way that she involved her family in her work, and how she juggles having such a young family with the extensive amount of work she clearly does in her councillor role.

She uses her experience of being a mother to work on the playground. She is drawing on her own experiences to then benefit the whole community and connecting up with Help for Heroes and other civic activities in the town.”

Looking ahead, what legacies would you like to leave behind for Henley when you complete your time as mayor?

I have an idea to plant a tree for every child in Henley. Out of all my proposals, this has attracted the most attention! I have received offers for help and support from all directions.

I plan to hold a Kellie at the Kenton event, a talent event showcasing children from local schools. I may also run a Henley Women of Achievement event and a Mini Olympics.

Perhaps most importantly, I would like to help young people understand the role of the councillor, and to encourage them to involve themselves in local politics. At a local level, people can make things happen by involving themselves in local issues that are important to them.

I would like to leave behind a legacy of opennenss, inclusiveness and transparency.