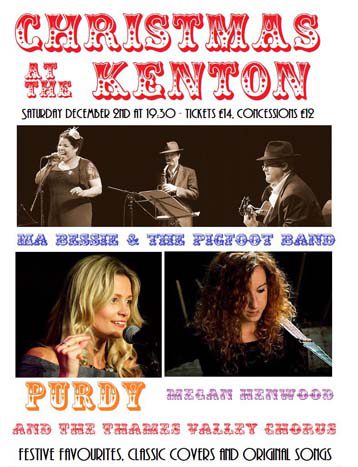 Swapping venues like the Royal Albert Hall and Wembley for the Kenton, local ‘Pop noir’ singer Purdy (Rebecca Poole) will open the show. Regarded as one of Europe’s leading a capella groups, the 30-strong Thames Valley Chorus bring their stunning harmonies to Henley once more, after starring at last year’s Living Advent Calendar. Another highlight of that event was Ma Bessie and the Pigfoot Band, who will also appear on Saturday, ,mixing 20s and 30s blues and jazz with covers from the last 60 years, they are not to be missed. And after receiving acclaim from Radio 2 for her latest album River, Megan Henwood returns to Henley for the concert. Plus Mike Rowbottom and Sam Fields will be singing a song from the new charity Christmas CD Mike has produced.  The host for the night is Matt Montana, who regularly plays at the Queen Victoria pub in Market Place.

The weekend kicks off a month of festive events in December that also include three performances of The Nutcracker on Sunday 3rd, the Living Advent returning to the theatre for the first time since 2014 on the 6th, a Christmas cabaret from Wycombe’s JP Academy, a sell-out show from Blake, the public premiere of new comic play A Christmas Tale, Robin Hood and Henley Children’s Theatre’s 48th annual pantomime Cinderella.

Kenton programming director Tom Ryan told the Henley Herald: “We have something for everyone with a very busy December and are particularly proud how much local talent, with national reputations, are gracing the stage, from Purdy and the cast of A Christmas Tale to our surprise guests as we welcome back the Living Advent Calendar.”

Tickets and more information can be found at www.kentontheatre.co.uk