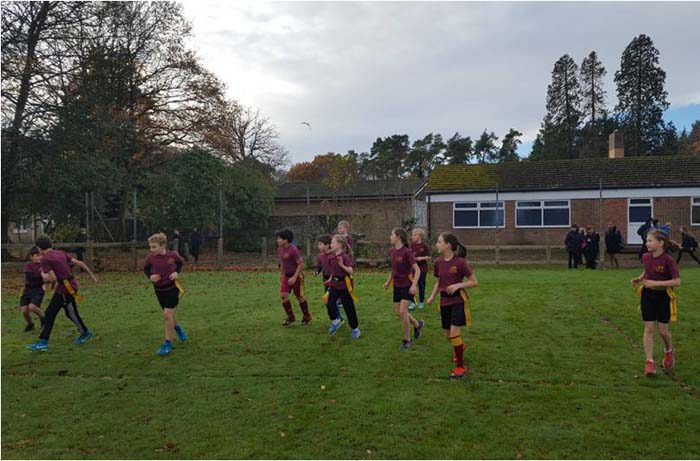 Last Friday afternoon, it was really cold when my school friends and I walked from our school to Gillotts to play the Henley Primary School’s Tag Rugby tournament. The schools who participated were Badgemore Primary School (my school), Trinity, Valley Road and Sacred Heart.

There were two teams from each school: a Year 5&6 team, and the other team was made up of Year 3&4 children.

I have been training for many weeks with Premier Sports in the Wednesday after school club at my school. This club was my choice because I think it is a really fun sport to play.

On the day of the tournament, I was nervous and confident at the same time. I was excited to go because I had never played tag rugby with people that I didn’t know before.

When we got there, I saw a couple of familiar faces at Gillotts. These were old Year 6 friends that just started at Gillotts. It was really lovely to see them, and they were excited to see us. They even came to watch and cheer for a little bit.

The practise area had tags, balls and plenty of space to warm up in. We did passing and tagging for our warm up.

After that, we had a talk about the rules and how we were going to play in the tournament. Then, game time!

For our real games, it was exhilarating fun because all schools tried exceptionally hard. We definitely had a challenge as all teams were trained to perfection.

We won two games and drew three tries each with Trinity Primary School., At the end of the main tournament, we played a combined match which was when two schools combined together to play a fun match. The combined game was fun because we met new people from other school and made new friends.

Thank-you to my teachers who trained me: Mr Hoskins and Mr Bull. I hope we will go again next year :)

On Friday the 24th of November, two teams from Badgemore School went to Gillotts for a tag rugby tournament. Everyone was really excited, the sun was out but it was quite cold. When we arrived we saw the other teams from Trinity School, Sacred Heart School and Valley Road School.

We played a mini match to warm up with Valley Road. Once we had warmed up, we played matches against all of the other schools.

There were lots of try’s scored by Badgemore and we all had a great afternoon outside running around.  To finish the day off, the teams were mixed up, with Badgemore joining Valley Road and Trinity with Sacred Heart.  Everybody had lots of fun!