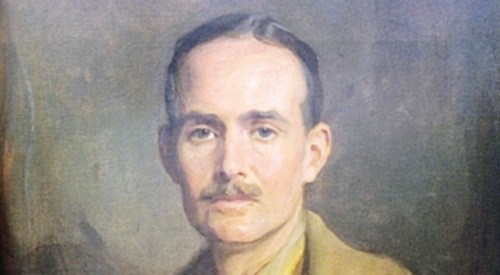 After the Club’s normal business had been completed, the guest speaker Stephen Quant was introduced to the members and Stephen gave a talk, accompanied by a slide presentation, that covered the life of Major Valentine Fleming DSO, MP.

Valentine Fleming was born in Fife, Scotland in 1882 and was the son of Robert Fleming, a Scottish financier and philanthropist who founded the merchant bank Robert Fleming and Co. Valentine was educated at Eton and Magdalen College, Oxford. He married Evelyn and the family initially lived in Braziers Park, Wallingford. They had 4 sons Ian (author of the James Bond books), Peter (father of actress Lucy Fleming), Major Richard Fleming and Michael Fleming.

Valentine became the Member of Parliament for Henley and served as its MP from 1910 to 1917. He always served as an MP in opposition and was very active in his early years (1910-1913) in the House of Common debates on topics such as the creation of the Social Security system and the Reading Expansion Bill (which led to the border of Berkshire moving to north of the river Thames).

At the outset of WW1 Valentine joined the Queens Own Oxfordshire Hussars and during 1914 the ferocity of the war in France in only its first year was becoming apparent partly as a result of letters written by soldiers and sent home; one of these was a letter sent by Valentine to his close friend Winston Churchill a part of which was:

“Imagine a broad belt [of land], ten miles or so in width, stretching from the Channel to the German frontier near Basle, which is positively littered with the bodies of men…in which farms, villages, and cottages are shapeless heaps of blackened masonry; in which fields, roads and trees are pitted and torn and twisted by [artillery] shells…

German bombing in the Gillemont area of Picardy France killed Valentine on May 20, 1917 (aged 35). He was posthumously awarded the Distinguished Service Order (DSO) for his service to the war effort. Valentine is commemorated on the Parliamentary War Memorial in Westminster Hall(1 of 19 MPs who fell in the war) and on the Glenelg War Memorial in Glenelg, Invernesshire.His obituary was written by Winston Churchill.

Valentine`s wife never remarried. After a number of questions/comments the Probus Chairman thanked Stephen for his very informative, fascinating and thought provoking talk and presentation.