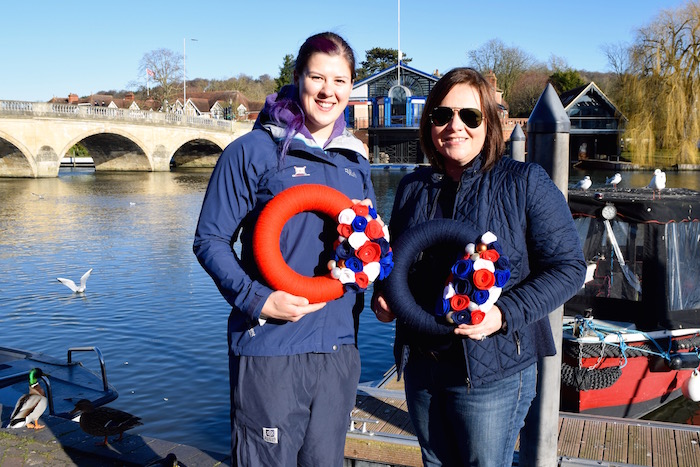 Christmas came late (or extremely early) for the GB Rowing Team when local business HoT Creative gifted them with two festive wreaths. The handmade decorations company, run single-handedly by Helen Stamoulis, answered the plea of GB rower Becca Chin, who posted a request for spare Christmas decorations on Facebook. The wreaths will bring some yuletide cheer to the crew room — albeit in 10 months’ time!

Though it may be too soon to start thinking about Christmas, Becca has already been making preparations for 2018’s festive season. As the rowing team, based at the Redgrave Pinsent Rowing Lake in Caversham, had no Christmas decorations in 2017, Becca was inspired to gather a collection of unwanted items ready for later this year. She posted an appeal on Facebook asking for donations of old decorations, which was spotted by Henley local Helen Stamoulis.

Helen generously offered to make two Christmas wreaths for the team, although a friend jokingly suggested she should’ve done five to match the Olympic rings! The wreaths, made of wool and felt flowers, were custom-made in colours to match the international team. “When making wreaths for the GB Rowing Squad, I simply had to choose red, white and blue decorations, with gold, silver and bronze accents!” she said. “I chose the red base to be Christmassy, and the blue base to represent the river. I hope they are fitting for such a talented group of athletes!”

Helen’s business began after a mouse ate her Christmas decorations in 2016. She chose to make her own decorations as replacements, which her friends encouraged her to sell. Each wreath takes about 3 hours to craft, including the special GB editions. Alongside a tree donated by Becca’s land lady, the wreaths are sure to bring some festive joy to the GB Rowing Team for years to come!

You can find HoT Creative on Facebook at https://www.facebook.com/hotcreative1/

Chiltern Centre Says Big Thanks to Their Supporters
Scroll to top