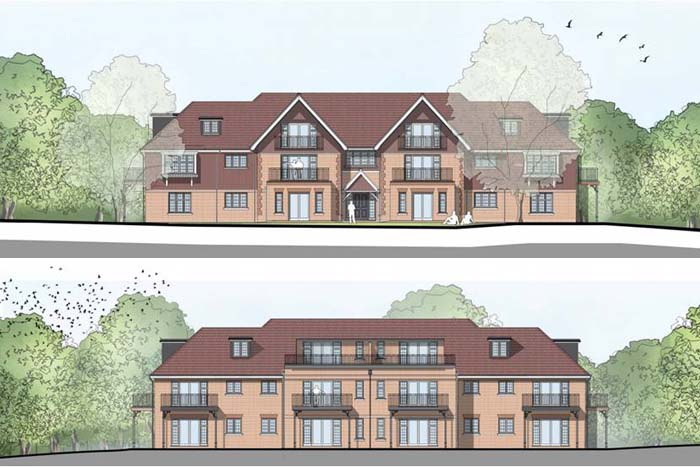 An application to build 10 apartments on woodland next to Parkside (off Gravel Hill)  has been resubmitted by Millgate Homes after the original application for 15 apartments was refused by SODC in May 2017.

The site was proposed in the 2015 Joint Henley Harpsden Neighbourhood Plan (70% responses agreed to development in NP consultation) but was not adopted in the final version due to the concern about the loss of protected woodland and trees.

The revised application for a 3-storey block of 10 apartments with basement car parking shows revisions to the roof height, removal of chimneys, reduction in the overall footprint and revisions to roof line and materials used to complement the woodland surroundings better.

In the Addendum to the Planning Statement it states, “The proposal would result in the removal of lower quality trees in the centre of the site, but the important boundary trees would be retained. The Arboricultural Impact Assessment and Method Statement (AIA) explains that the proposal would not result in the removal of trees which contribute to the district’s landscape character or which are key features of the landscape.”

The application references in many of it’s accompanying reports that “The recent increase of housing numbers allocated to Henley as a result of the Emerging Local Plan adds increased need to review the capacity of existing allocated sites and to potentially allocate new sites or to allow windfall development sites such as this to help meet this increased housing need.”  The application references Thames Farm and SODC not being able to demonstrate a “3 year supply of housing, never mind a 5 year supply.”

As part of the new application, the following Section 106 financial contributions have been proposed:

At last night’s Henley Town Council Planning Meeting, the committee recommended refusal of this amended application because the site is not in the Joint Henley and Harpsden Neighbourhood Plan (main reason) and the loss of trees, access and 3 storey height (size and bulk) other reasons.  The application will be reviewed by South Oxfordshire District Council with a target decision date of 8 May.