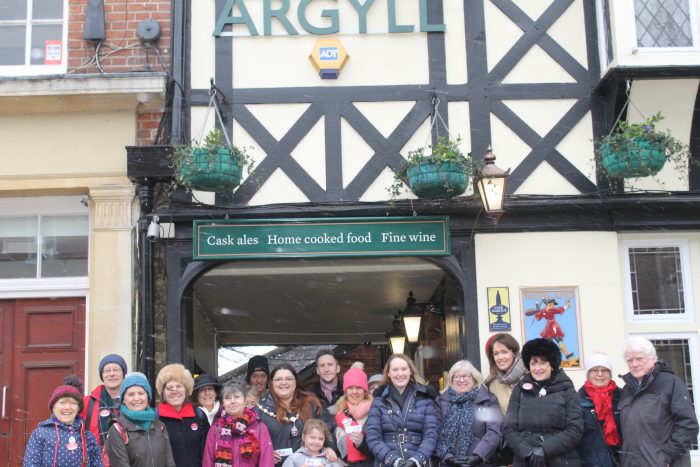 A new series of Henley Midsomer Murder walking tours kicked off for 2018 season on Saturday, starting from The Argyll pub where the episode ‘Last Year’s Model’ was filmed.

This year the series will celebrate the 21st series which has been filmed at a number of Henley locations including the latest location, Henley Rugby Club that will feature in the new series which has yet to be aired.   The club was converted into the home of the Causton Lions RFC with several of the Hawks squad being part of the Lions team.

Sarah Osbourne who co-ordinates the tours and runs the Visit Midsomer website said, “Midsomer continues to be as popular as ever with 6.5 million people watching it in the UK plus it is one of Britain’s biggest TV exports to France, Germany, Belgium, Denmark and Norway.  We’re delighted to welcome Henley Mayor, Kellie Hinton on the tour today along with local residents and tour operators.”

Kellie said, “I’m incredibly proud that Henley has been used for locations for Midsomer and that this attracts people to come and visit our town.”

Karen Roebuck from Visit Thames said, “We promote the whole river destination but Henley is very popular with tourists because of the Midsomer connection.  We recently brought a whole coach load of tourists from Germany which was a great success and we hope to bring many more coach tours over the summer season.”

Neil Ainsworth, Landlord at The Argyll pub said “Midsomer is fast becoming a popular place for tourists to visit. Our own unique connection with the show captures peoples imagination and they want to visit and experience our pub.”

The Midsomer Murders walking tour starts at 11am every Saturday (apart from 7 July) until 27 October and takes approximately 1 hour.

To book go to https://www.ticketsource.co.uk/henley-hosts/events

Man Arrested on Suspicion of Assault on Couple
Scroll to top