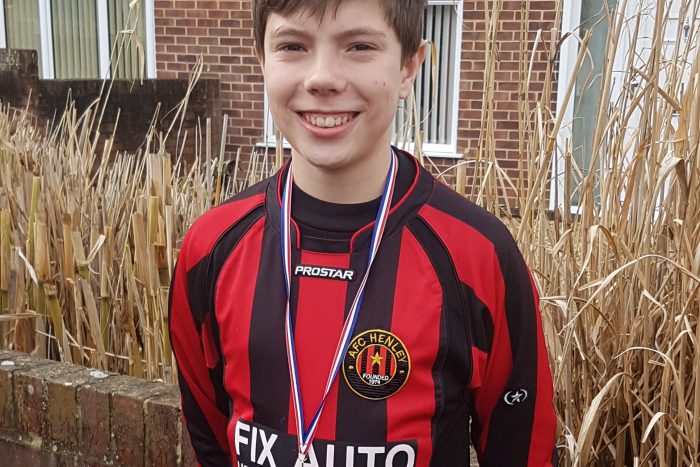 The Under 11 AFC Henley Hurricanes proved their doubters wrong as they drew 2-2 away at a strong Hawley Raiders side.

The relegation threatened Hurricanes have had a difficult season but stormed back to form here and were desperately unlucky not to secure all 3 points.

The game began in open fashion with chances for both sides but it was the hosts who scored first as they notched with a thunder bolt of an effort from 30 yards that keeper Ben Horner could do nothing about. It would have been easy for the Hurricanes to fold but they rallied and created plenty of chances of their own although could not convert any as the first quarter ended 1-0.

At the start of the second quarter the Hurricanes worked hard to carve open the Raiders and this soon bore fruit as Sam Winters was sent tearing away through the heart of the Raiders defence. His powerful shot could only be parried by the opposition keeper and Tom Yeoman was on hand to ram home the ball to make it 1-1. The joy was only short lived however as the Raiders hit back with another long range effort to make it 2-1 at half time. Horner had a very tidy game dealing with everything thrown at him and was desperately unlucky to concede the two goals.

Captain and man of the match Luca Thomson had one of his best games in the famous red and black shirt as he proved to be a man mountain at the back not letting anyone pass and blocking every ball in sight. He was ably assisted by the energetic Tom Bonser who tackled tenaciously throughout the game and Olly Saunders whose thumping deliveries from the back help set up attack after attack.

Joe Turner was also key to this epic defensive performance as he anchored the midfield snuffing out any Raiders attack and protecting the back three admirably in a showing reminiscent of the great Graeme Souness.

In the third quarter Winters sent Tom Atkinson away down the right. Atkinson had been a constant threat on the wing with his pin point accuracy and he played Winters back in whose shot was again saved and in a carbon copy of the first goal Yeoman was there to slot home the equaliser and his second of the game.

It set up a barn storming last quarter and Daniel Tsoi, operating down the left for the Hurricanes, set up numerous attacks for the visitors but they were unable to convert any of their chances as the hosts were relieved to hear the final whistle as the game finished 2 2.

Managers Turner and Atkinson, who had been given the dreaded vote of confidence earlier in the week, were said to be delighted by the performance and commented that the team now faces 2 “FA Cup Finals” to stave off relegation.