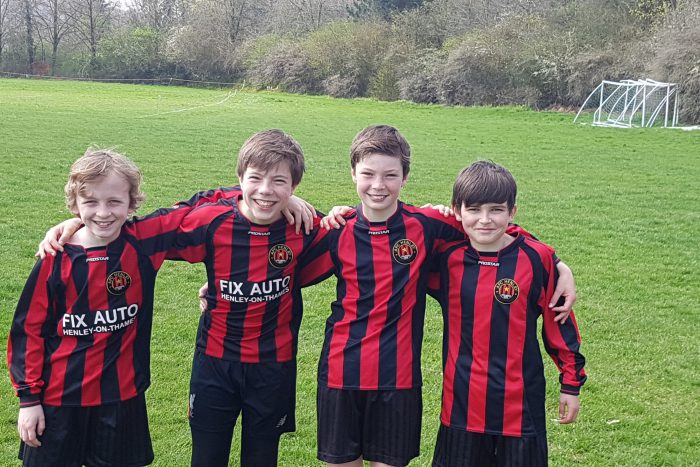 The U11 AFC Henley Hurricanes put in a heroic performance at Jubilee Park as they ran out 4-3 victors against NPL Yellow.

On a glorious morning the Hurricanes knew that only a win would suffice and the sun was shining on them as they delivered the victory that meant their relegation battle would go down to the wire.

On Grand National day it was the Hurricanes who leapt into the lead as they got off to a flying start. Once under starters orders it was Alec Steel who rampaged down the right and after beating 2 defenders crossed for striker Finnbar Scott who made no mistake from close range.

Olly Saunders was the man between the sticks and he produced a number of fine saves to keep the score at 1 0. Henry Steel put in a great shift on the left side of midfield often breaking forward to set up the Hurricanes’ attacks but the score remained 1-0 at the first quarter break.

At the start of the second quarter the visitors equalised as they scored with a header from a corner. However, captain Luca Thomson ensured that the only real danger the opposition would pose was direct from set pieces as he snubbed out NPL’s main attacking threat with a man mountain performance. Man of the Match Daniel Tsoi had his best game in a red and black shirt. His passing exploited the space in behind NPL and his tackling back was key in keeping the opposition at bay.

Joe Turner was also having a great game in the centre of midfield jockeying the visitors whilst also launching the Hurricanes forward. Indeed, Turner sent Tom Yeoman streaking away down the middle and Yeoman showed great perseverance as he rammed the ball home after an error from the opposition keeper to mean the hosts went in leading 2-1 at half time.

NPL made it 2 2 direct from a free kick at the beginning of the third quarter though but the hosts refused to lie down as they bounced back again. Tom Atkinson picked up the ball on the right side of midfield and threaded the ball through the eye of a needle to release Scott and he used his strength to muscle past the opposition and make it 3-2.

Atkinson was now pulling the strings in the midfield and he released Scott again who played in Yeoman. Yeoman skipped past the keeper but was brought down as the referee had no option but to point to the spot. Yeoman dusted himself off and stroked the ball home to make it 4 2. Tom Bonser was having a fantastic game at the back as his tough tackling and astute positional play made him difficult to pass.

However NPL battled back again to make it 4-3, again direct from a free kick, near the death but the Hurricanes hung on to secure their second win of the season.

The Hurricanes now face a key relegation battle against Binfield in their last game of the season in three weeks time at Jubilee Park.

Managers Turner and Atkinson were said to be delighted by the performance and were now looking forward to the relegation decider in a few weeks time.

If any boy or girl in the Under 11 age group would like to play for AFC Henley then please come down to Dry Leas (at Henley Rugby Club) on Friday nights at 6.30pm or contact Trevor Howell whose details are on the AFC Henley website.