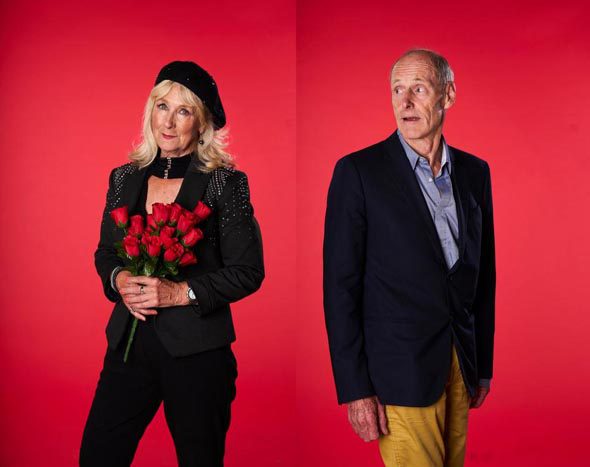 Connie Butt from Henley has been looking for love since she lost her loved one 13 years ago.  Her daughter, Samantha Thirlby-Smith therefore decided to apply for her to go on the Channel 4 First Dates programme to hopefully find that special someone.

Connie, aged 74, works at the Over 60s Club in Henley.  She was married for 24 years and then 13 years ago she lost her partner when he tragically took his own life.

The episode showing Connie’s date with Gray from Sevenoaks, aged 72 was aired last night and Connie was joined by her daughter and friends to watch it live at The Anchor pub.

Connie said, “I had my interview last May and the date was filmed back in October.  I really wanted to go on the First Dates Hotel in Italy and was told I was on the list for this but it didn’t materialise as the girl in the production team I was being looked after left. I said that I would like the man to have spark, be fun and nicely dressed.  Someone with a different type of character and I didn’t care whether he was fat or bald just as long as he was good company and was someone who would not wait for the other person to make arrangements.”

In the before date interview on the programme, Connie said, “I come over all flamboyant, sometimes loud and I think that’s been the trouble.  A lot of men think I’m too hot to handle.”

Dressed in a black sparkly outfit topped off with her well known beret, Fred the Maitre D’ commented when she was walking towards the restaurant entrance, “This lady looks likes she means business.”

On entering the restaurant, Connie said, “This is for you (referring to her beret) before jokingly saying “Monsieur I have a French accent but I speak no French.”  Fred replied “Are you taking the micky?!”

Not shown on the programme was that Gray took half an hour to arrive and Connie told us that she had said to Fred that if he didn’t arrive in the next 10 minutes she was leaving!

Arriving also wearing a hat and on a scooter, Gray told Connie that he loved to dance particularly the jive like Connie. At this moment, you thought that it was perfect match.  However when Connie said, “it’s all in the arms” and Gray didn’t agree Connie’s face gave an indication of perhaps what was to follow.

The date lasted 2 hours and as always only a snapshot was aired from the cameras that are well hidden around the restaurant.  Connie commented, “You don’t feel that the cameras are on you, there are so many of them recording and zooming in, you forget they are there.”

Gray told Connie that his wife left him 28 years ago and that one thing he has learnt is that “you cannot make assumptions a person will be there all the time unless you make sure you are connecting.”

On the programme Connie asked Gray what was on his bucket list and he replied, “I don’t have one and don’t agree with them.  There’s no particular place I want to visit.”  Connie however talked about all the things she’d liked to do including going to Venice on the Orient Express.  She told us too that she’d talked to him about going to see the amazing Terracotta Army in Thailand to which Gray replied that he didn’t’ need to go as he’d seen it on TV!

Asked by the waitress how the date was going, Connie replied “He’s boring he just doesn’t want to do anything.”

Connie was surprised they didn’t include them ordering dessert as Gray asked if he could have some blue ice cream which they said they could make but would take a while and in the end Connie told us I got fed up with him and said “leave it and give him vanilla!”

In the aired interview afterwards, Connie summed up the date by saying, “I ordered a double Expresso coffee – I’m going out on a high and he orders a decaf – he’s going out flat!”

When the pair were asked would they like to see each other again?  Connie was quick to reply first by saying “You’re a nice guy but you didn’t light my candle” to which Gray replied, “ I didn’t know you had a candle!”

Those of you who watch the show know that sometimes the daters are given a second chance if their first date doesn’t work out.  Connie said, “I have said that I would be up for this but it took them such a long time to find this one I’m not sure they’ll find me someone else.”

“I don’t think I came across like the person I really am. I’m very much a pleaser.  I found Gray very difficult to talk to as everything I suggested he boohooed,” concluded Connie.

If you missed the show, you can watch it on All 4 at http://www.channel4.com/programmes/first-dates/on-demand

Can we help Connie find love?  If you’d like to meet her, we can put you in touch.