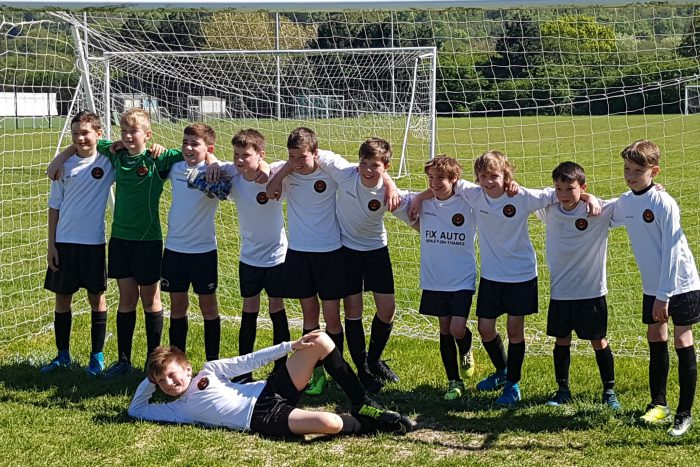 The U11 AFC Henley Hurricanes put in a truly heroic performance at Jubilee Park as they earnt a 3-3 draw against Binfield FC to secure their Division A status.

With the sun beating down the Hurricanes knew that that they had to get something out of the game but they got off to a slow start as they found themselves 1-0 down in the first quarter. Against the run of play Binfield broke quickly and scored to put the hosts under a huge amount of pressure. Keeper Ben Horner kept the Hurricanes in the game with a string of fine saves and he ensured no further damage was done as they went in 1-0 down at the end of quarter 1.

The Hurricanes refused to lie down though and came bouncing back in the second quarter. Alec Steel was a constant threat down the right and sent in a number of excellent crosses that striker Finnbar Scott couldn’t quite get on the end of despite his tireless running and robust approach. It was Tom Atkinson who unpicked the Binfield defence as he played an inch perfect through ball to Henry Steel and the left winger showed nerves of exactly that to smash the ball past the onrushing keeper to make it 1-1 at half time.

Captain Luca Thomson gave his usual commanding performance at the back mopping up all the loose balls and keeping the opposition striker in his pocket. He was ably assisted by Tom Bonser and Olly Saunders who gave very disciplined displays with their rock solid tackling and intelligent distribution from the back. Utility man Daniel Tsoi also gave one of his most effective performances of the season as he shielded the back three against the Binfield attack and fed the front men with balls in behind the Binfield defence.

This gave the Hurricanes the platform to get on the front foot and man of the match Nicolai Bruun-Andersen made great strides down the left to set the Hurricanes on their way. In what was to be the great Dane’s final match in the famous red and black he gave a trademark display of wizardry and wonderment that helped the Hurricanes get their noses in front. He left a number of defenders in his wake before slipping the ball to Atkinson. Atkinson showed Ruben Neves like quick feet before he slotted the ball into the top corner as the hosts took the lead. Further joy was to follow as Tom Yeoman danced through the middle of the Binfield defence and powered the ball home to make it 3 1. However, the visitors pulled one back as they made it 3-2 going into the final quarter.

Controversy was to follow in the last quarter as a hotly disputed penalty was awarded to Binfield and they scored it to make it 3-3. The game now swung from end to end and Atkinson hit a 20 yarder against the bar as he tried to wrap the game up. However the drama did not end there as Binfield were awarded yet another penalty which they duly shanked wide as poetic justice was served.

The final whistle brought the curtain down on a turbulent season for the Hurricanes where their improved form in the second half of the campaign marked them out as genuine Division A contenders.

Manager Atkinson was said to be over the moon with the performance and was relieved that the Division A status of the Hurricanes was in tact.

In other news the absence of fellow manager Mike Turner fuelled speculation that he could be making an imminent move to a recently vacated role in North London.

Christ Church Minister Glyn to be Speaker at Sceptics and Believers Discussion...
Scroll to top