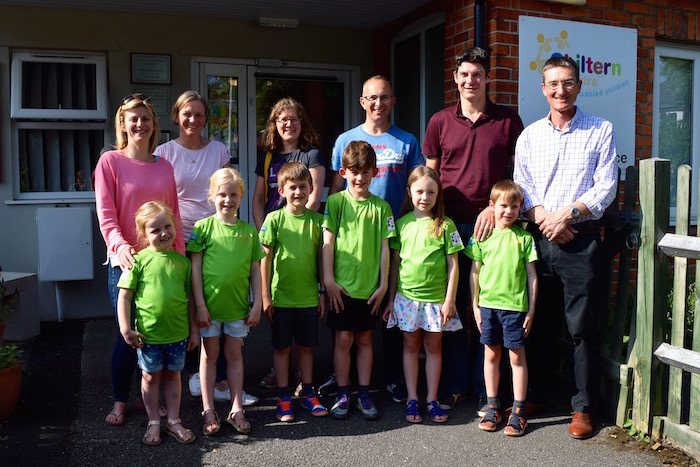 The Chiltern Centre opened its doors to a special group of young adventurers on Monday. After conquering the Exmoor Children’s Challenge last month, the budding mountaineers who raised money for the Centre were invited to see what their brilliant efforts would go towards. The teams of local primary school children collected over £6,000 for the organisation, based on Greys Road.

The Exmoor Children’s Challenge took place on Saturday 21st April, and saw hundreds of Henley children getting involved to raise money for charity. From Trinity Primary School alone, there were around 120 participants, including teachers and parents. The explorers had to tackle an extended walk, with 3 distance options to choose from — 12k, 17k and 21k. Each team was invited to choose a charity to fundraise for on their trek. From gathering the right equipment, to fuelling up on pasta the night beforehand, there was plenty of careful preparation before the big day. Thankfully, the weather held out, and the children could complete their charitable challenge under sunshine-filled skies.

The Chiltern Centre, who supported the organisation of the Children’s Challenge, was a popular charity choice amongst the fundraisers. Approximately 7 teams from various schools — including Trinity, Shiplake COE Primary School, and Robert Piggott COE Junior School — chose to dedicate their expedition to the Centre, which offers respite care for local children and young people with disabilities.

The families who took part were then invited to visit the Centre on Monday. Six children — Grace (5) and Eva-Rose (7), Henry (7) and Eddie (10), Sophie (8) and Henry (6) — and their parents were given a tour of the Centre as a thank you for their efforts. Liz Deacon, Community Fundraiser for the Chiltern Centre, explained, “I thought it was really important to get them here to show what they raised money for. They all raised a huge amount of money, and a 5 year old walking 17k is a long way!”

The £6,000 raised by the children will go towards the general upkeep of the Chiltern Centre’s services, which costs nearly £200,000 per year just to maintain. Grace and Eva-Rose’s mum, Elizabeth, was pleased to be donating to such a worthy organisation. “It’s a fantastic local charity to support. We don’t have any ties, but Steve who organised it said it was a great cause and we firmly agreed!” She reflected, “I couldn’t have been prouder and it was a great fun, bonding experience.” Congratulations to the many children who took on the Exmoor Challenge for their amazing achievements!

Help Ben Get a New Freestyle Wheelchair
Scroll to top