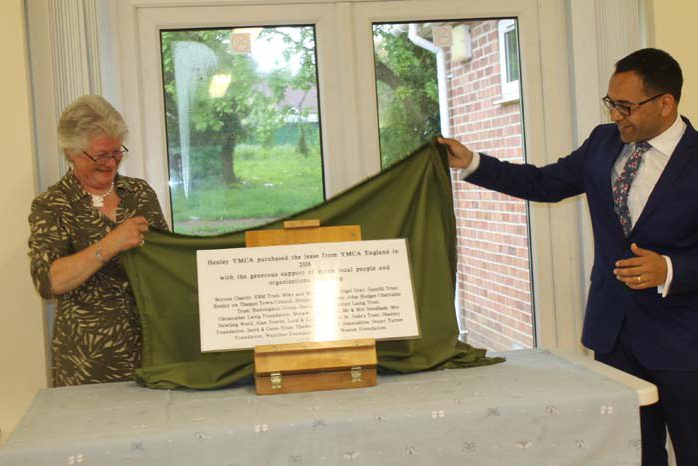 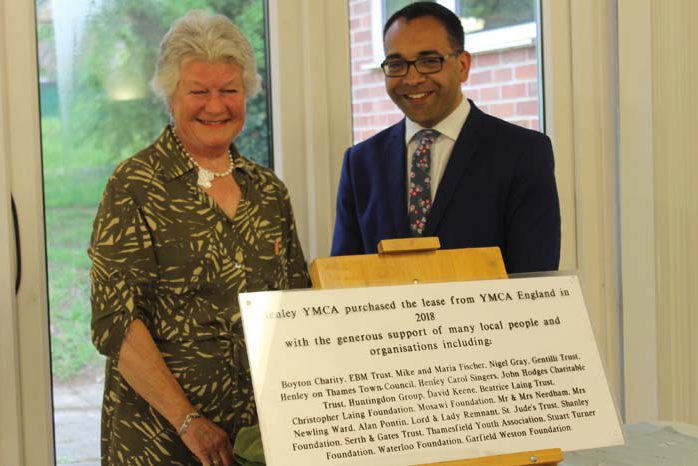 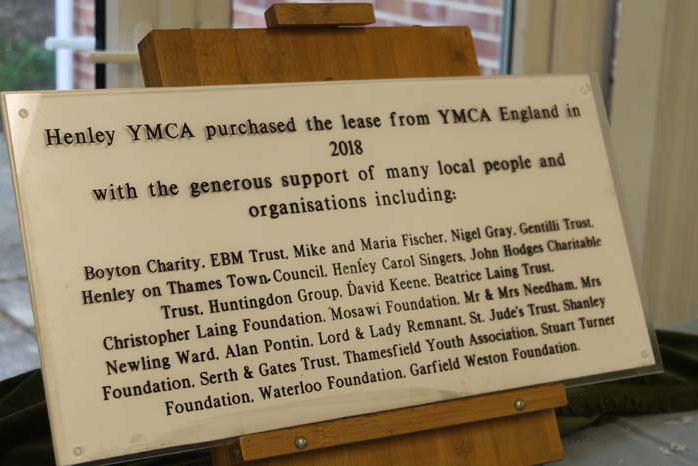 Henley YMCA were delighted to unveil a new plaque on Friday evening to give recognition and thanks to the generous supporters in the local community who helped purchase the accommodation buildings lease from YMCA England in Lawson Road.

A total of £570K was raised to purchase the 62 year lease in February 2017 through donations, grants and loans from Henley Town Council and South Oxfordshire District Council after a campaign which was launched in October 2015 when YMCA England decided to sell all their building assets.  Henley YMCA already owned the land itself.  The YMCA has been part of the Henley community since 1857 and today offers subsidised accommodation to 16-27 year olds in 21 studios and 10 flats.

Before the plaque was unveiled, Chair of the Henley YMCA Trustees, Rosemary Duckett introduced Dr Krish Kandjah who she had met after he spoke at last year’s Henley Literary Festival.  Dr Kandjah, who founded the charity Home for Good, a charity which raises awareness of the need for foster and adoptive parents, encourages families to provide loving homes for the children in care, and equips the Church to offer welcoming communities for them. He co-wrote a book Home for Good with his wife Miriam which blends the story of God and addresses the challenges of our times.

Kris gave a fascinating and humorous talk about him and his mother offering hospitality to strangers and foster children who have had a big influence on his life. He spoke about Christianity being at the heart of the YMCA after George Williams, a draper offered hospitality for young men that were in need through bible study and prayers.  He retold the tales of Jesus being given hospitality by the inn keeper when he was born and after his crucifixion when two disciples asked him to come into his home.  Kris said, “I run a charity because I think hospitality is important.  My charity like the YMCA cares about vulnerable people.”  He referenced the recent Windrush scandal and treating people terribly and commented, “I love that here in Henley you’re modelling a different way.  You’re not asking who deserves to be here and who doesn’t. You’re saying that whatever their background, whatever their needs there is a safe space and you can experience the hospitality of this town.  I want to commend you. I think what you are doing is fantastic.”

Rosemary said, “I’d like to thank everybody who donated, whether your donation was big or small.  It is absolutely marvellous that we have purchased the lease and we can continue to set young people on the right path.  A great example of which is our Mayor, Kellie Hinton who was a resident a few years ago and now a Trustee.  Thank you from the bottom of our hearts.”

The Henley Herald website provides an up-to-date and unbiased digital news service for
Henley-on-Thames
Student’s Artwork on display in ‘Interpretations’ at River & Rowing...