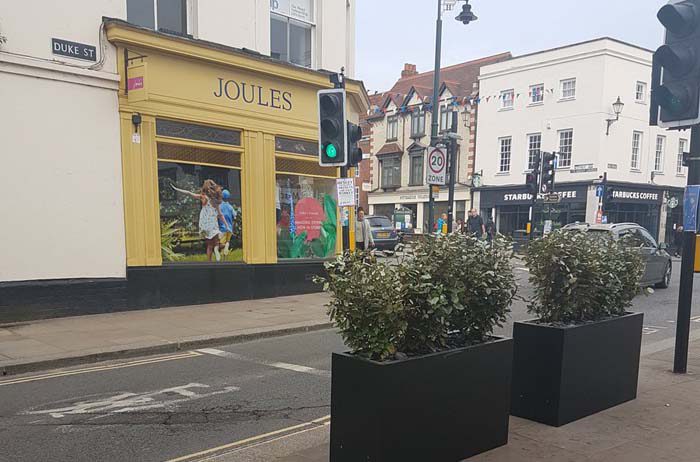 Two large planters filled with a hairy leafed shrubs have been temporarily installed either side of the traffic lights at the corner of Duke Street/Hart Street as a trial for tackling air pollution and to consult with residents and retailers on their views.

The trial has been organised through County Councillor Stefan Gawrysiak and the Henley Town Council Transport Strategy Committee Group as part of their proposal to reduce air pollution in the town.  The full proposal is to install planters all the way down Duke Street, where the pavement is wide enough.

The shrubs are a variety of Elaeagnus plants which draw in toxins from exhaust fumes through the leaves.

The planters were kindly loaned by Windowflowers for the two week trial who supply and look after other planters and hanging baskets in the town.

Chair of Henley in Bloom, Councillor Kellie Hinton said, “I’m delighted we’ve finally got to do this after Caroline Langler, a member of Henley in Bloom and Henley in Transition has been campaigning for over 10 years to put greenery on our streets.  After Clive Hemsley donated his living green wall in Hart Street, we thought we should tackle Duke Street next as it is the worst polluted street in town.   Caroline was helping with the consultation on Saturday morning when we received some good feedback and also some suggestions about location and safety as well as companies coming forward to look at the possibility of sponsoring these. It has been reported that children’s lungs are being seriously affected by air pollution and these planters are just the right height to help this.”

This is just one of the measures the Transport Strategy Group has proposed.  Others include the new greener town centre bus which will start operating in July, supporting the Henley in Transition Clear Air for Henley through their No Idling campaign, a town centre 20mph zone, new car club and cycle routes.

What do you think?  Leave your comments below