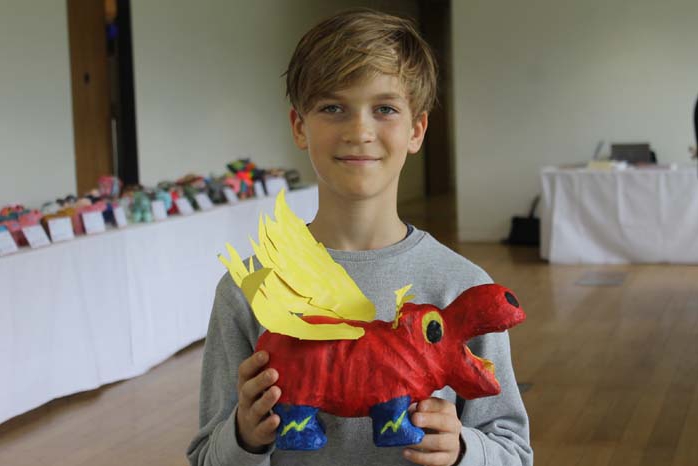 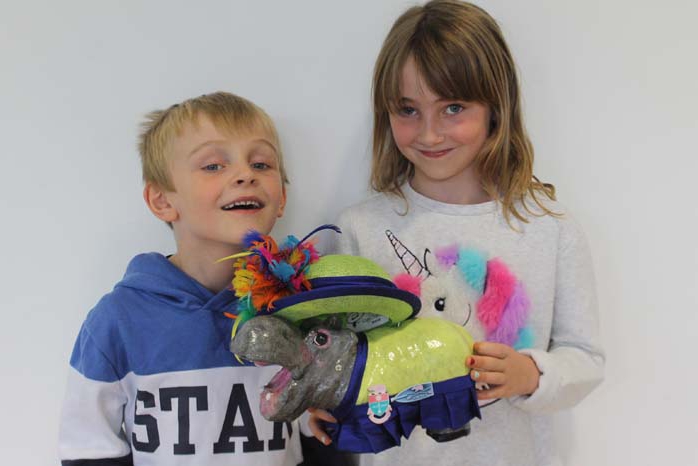 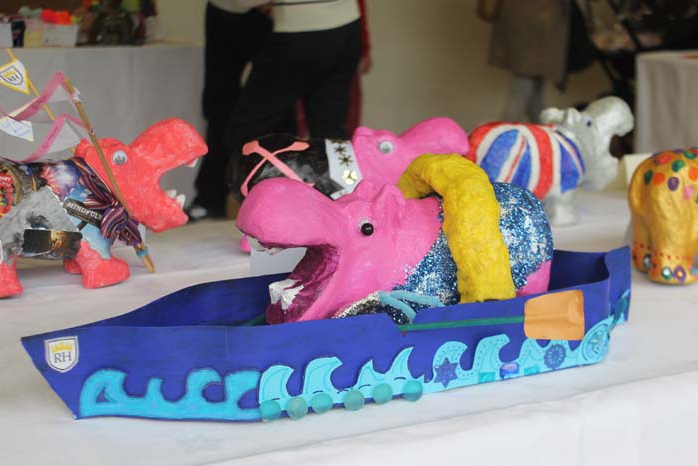 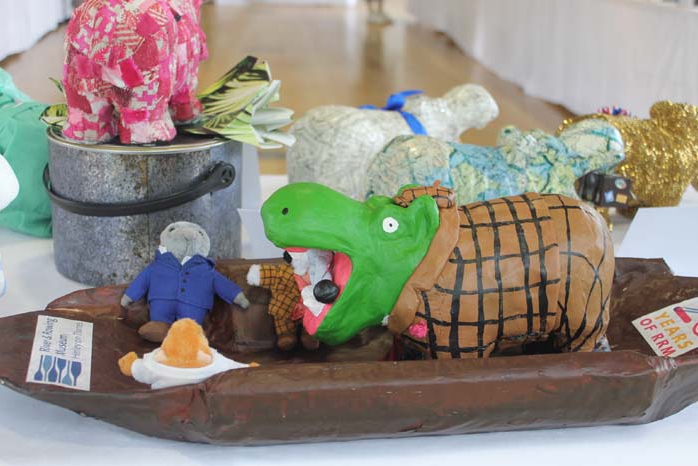 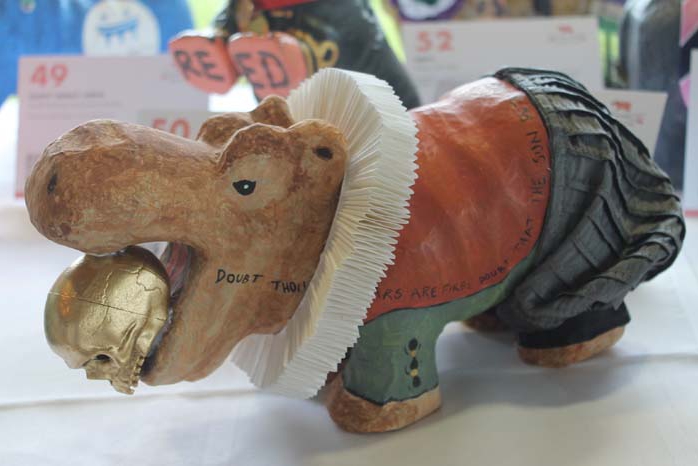 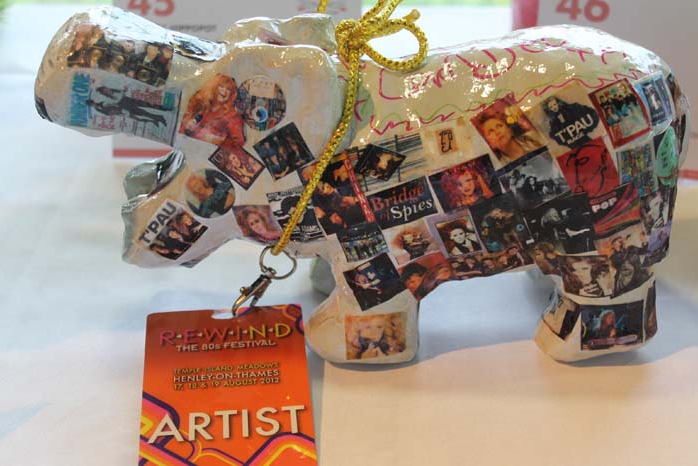 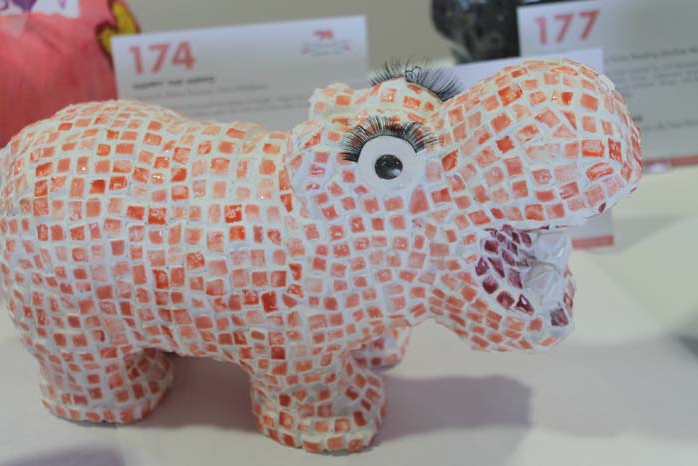 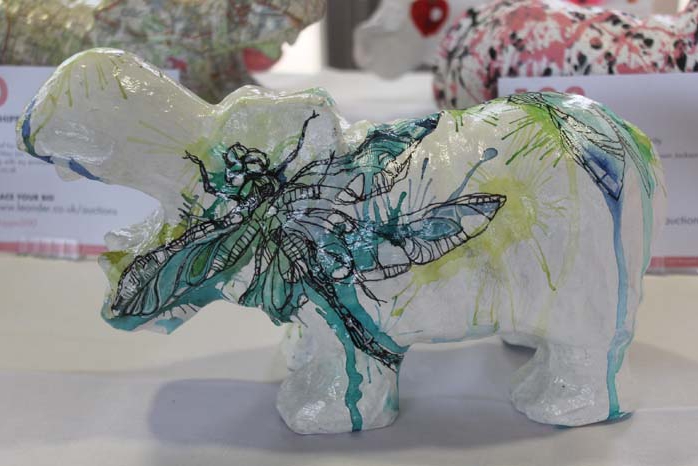 All 200 Leander Club hippos were back on display at the River & Rowing Museum on Tuesday this week for one day only for children to see during half term.

The hippos have been decorated to mark and celebrate Leander’s Club bicentenary by local schools, clubs, artists, businesses and celebrities.

Finn Suter from Shiplake College who made Flash the Super Hippo was visiting with his family.  He said, “The inspiration behind the design was Flash Gordon.  My design was chosen from all the paper designs submitted by my Year 7 group.  I think it took over 4/5 hours to complete and wiring the wings on was the hardest part.”

Scarlett (aged 7) amd Max (aged 6) had come to see their Nanny Louise’s hippo – Miss Hattie Hippo.  Made by Louise Walton of Louise Claire Millinery of Wallingford the little hat was made using the traditional block method.  Louise told us it took several days to complete.  Scarlett said, “My favourite part is the hat and the feathers which I helped Nanny curl.”

The River & Rowing Museum’s The Hippopota-Toad was made by the museum staff and children from Rupert House which see’s Mr Toad in the guise of a hippo in a boat with his friends Ratty, Mole and Badger.  Catherine Yoxall, Marketing Manager from the Museum said, “We’ve loved having all the hippos again back here in the Museum.  The standard of designs is amazing and everyone has put in so much thought, time and effort.  Hip hip horray to everyone involved!”

Some of the hippos will be left in the museum in the First 200 Years Leander Club exhibition and others will be on display in shop windows around the town for the Henley Regatta Window competition during Regatta week.

Most of the hippos have been entered into an auction via Leander Club website for people to bid on.  Money raised from the auction will go The Kafue River & Rowing Centre which Leander Club has been supporting for the last 3 years.   The centre is being built south of Lusaka in Zambia as a centre for clean water research, education and to develop the sport of rowing.  The closing date for bids is the 16 September.