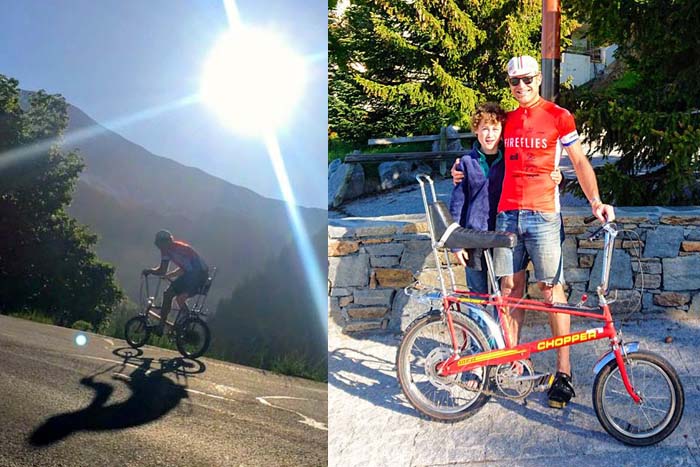 Matt Richardson and his 10 year old son, Felix last weekend completed the horribly steep Alpe d’Huez French Alps, mountain top climb.  Matt did the challenge twice in one day – first on his MK 2 1975 Raleigh Choppper bike and then with his son Felix who goes to Sacred Heart School both on racing bikes.

Matt is no stranger to doing bonkers challenges on his Chopper bike which he’s completed in memory of his father and has raised thousands of pounds for Bloodwise (Just Giving link), the blood cancer charity. His other challenges have included Mont Ventoux (2014), the Hour Record (2015), the Stelvio Pass  (2016) and London to Paris last year.  He hadn’t planned this year’s challenge until he was inspired to tackle the Alpe d’Huez  after hearing  Mark Beaumont speak in May about his record for cycling around the world .

Alpe d’Huez is famous as a Tour de France mountain-top finish. It is 13km of constant climbing to an altitude of 1,860m with an average gradient of 8.1%. Its famous 21 hairpin bends are hard work on a racing bike and, somewhat obviously, much harder on a 20kg chunk of 1970s steel and rubber.

Matt said, “On arrival in the Alps, I was amazed by the way Felix was able to ride up mountains. His incredible ride up Col de la Croix De Fer (the day before the Alpe d’Huez ride) astounded me. The Croix De Fer climb is huge: a 32km ride up to an altitude of 2,067m with a total ascent of 1,347m. Felix managed it with only one stop, overtook a few grown-ups on the way and even went for a sprint finish at the top. The next morning, as I was getting ready to ride the Chopper, Felix confirmed that he wanted to ride Alpe d’Huez too. I was amazed but agreed to ride up the mountain with him later that morning if I felt I could do so after completing the Chopper Challenge.“ 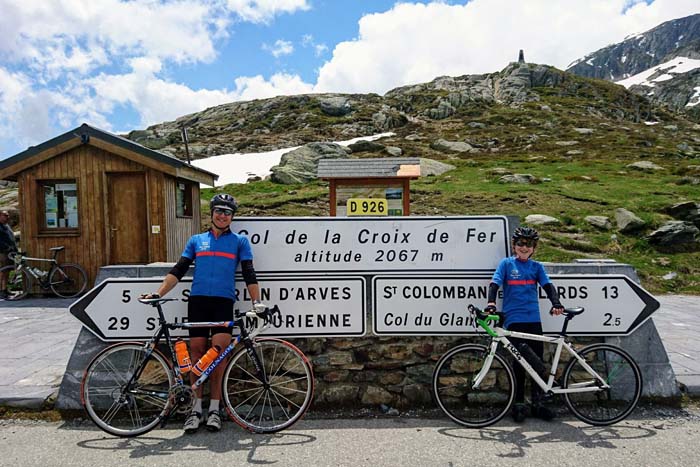 Knowing the Alpe d’Huez climb well, Matt knew the first four of its 21 hairpin bends were horribly steep and can dishearten even a determined rider.   He started off early at 6.48am to ensure the first half of the climb was in the shade.   Matt explained “I decided I would attack this steep, early section very hard in order to get it out of the way and then try to maintain as much speed as possible as the gradient became slightly less severe. The Chopper has three gears and even first gear is stiff. It’s a bike made for cycling round to the corner shop for a Beano comic and a quarter of pear drops, not for riding up mountains!  I knew that if I didn’t keep a certain momentum I would struggle to maintain enough cadence (i.e. I’d pedal too slowly) and might therefore be more likely to cramp. I started very aggressively and was already too short of breath to speak by bend two of 21. I needed sips of water almost straight away – far earlier than I anticipated and eating any kind of snack was impossible because I was breathing too hard.”

After about half way up the climbing sun and the loss of tree cover meant Matt was almost always in direct sunlight. Matt added, “I became very hot. Despite pushing harder than I thought would be sustainable, I somehow managed to keep my momentum and, with five bends to go, I knew I had a very good chance of going faster than the 1 hour 30 minutes I had predicted. My mouth was dry and sticking together but with the town in sight above me I held nothing back and hoped I would be able to maintain my rhythm to the finish. The final bend up into the town was excruciating but I managed to hold my speed over the red finish line. My exhaustion was at least as severe as it had been at the end of previous Chopper challenges but I think something about my condition was better than in past years. My time was 1 hour, 16 minutes. Perhaps I’m getting used to the 20kg chunk of Nottingham steel and rubber…”

After the exhausting Chopper Challenge but with Felix’s request to ride Alpe d’Huez too still fresh in Matt’s mind.  He said “I was ready to do something special.  Despite Felix’s alloy racing bike being slightly heavier than mine, I had to work hard to keep up with him. Felix finished the climb in 1 hour 30 minutes. I was amazed as we climbed the mountain, counting down the hairpin bends. As per the Croix De Fer climb I kept asking him how he was doing. On every occasion his answer was the same “I’m fine thanks.” As we rode around the final hairpin bend he stood up on his pedals, changed into a stiffer gear and sped away from me, going for what seems to be his trade mark sprint finish over the line.”

Matt would like to thank everyone who supported him and contributed so generously to Bloodwise.  Matt commented, “Mark Beaumont was extremely kind, both sponsoring me and tweeting my fundraising link to his 44,000 followers. It always amazes me how kind people are when asked for donations and I’m every bit as grateful as I have ever been. I must also thank Alex Whittenbury and Kamran Richardson without whom I wouldn’t have been able to complete the ride. They gave me water, tried to give me snacks (it wasn’t their fault I couldn’t eat it) and encouragement all the way up the mountain and you can’t ask for more than that!” 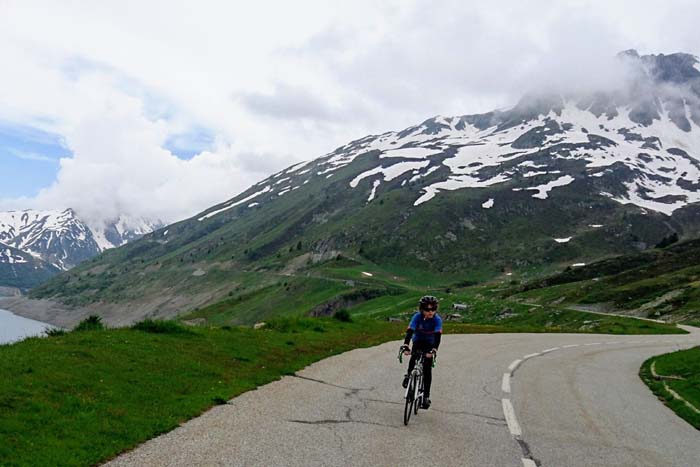