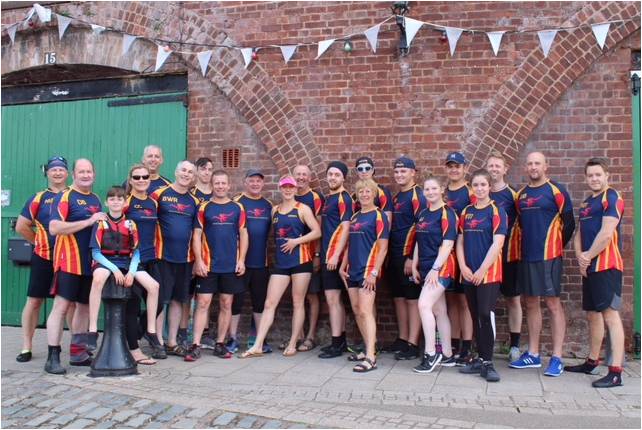 The Henley Dragons, equip with pride and enthusiasm, made their way down to BDA Exeter where Exe-Calibre were to host the 4th race of the season where teams would be competing in both the open 200m and open 450m races.  These sprint races are close quarter three lane races, so it was a test for not just the paddlers to remain focused, but so also their helm.

In full force, Henley made a cracking start, making it straight through to the semi-finals after their flying start in the first race.  This put Henley on the map, evidencing all their hard work training, showing their full colours of what a strong team they are, pulling together.  They made the Major Finals against Wraysbury and Typhoon in the 200m sprint, Wraysbury who won with 52.81 seconds, Typhoon with 53.66 seconds and Henley with 55.07 seconds.

In the 450m races, Henley again triumphed, making it through again on placing and time into the Major 3 lane final.  Such was the stunned and impressed feeling from other sides, Typhoon, who were caught out by Henley’s strength, changed boats and did a full squad rejig in order to face Henley in the final.  Despite a focused team, and desire to reap the rewards, Henley (1:45:95) were beaten in the final by Wraysbury (1:40:78) and Typhoon (1:41:87).

The Henley/Bristol Burner composite Youth team showed other teams what they’re made of and powered home in first place. Henley are so pleased with the talent and commitment demonstrated within their youth team.

Competing against these top teams with a crew, some of whom have not experienced a sprint race, is testament to highly successful league races ahead of Henley.  Henley are due to race again on the 30th June when Secklow 100 will be hosting the sprint races in Milton Keynes.