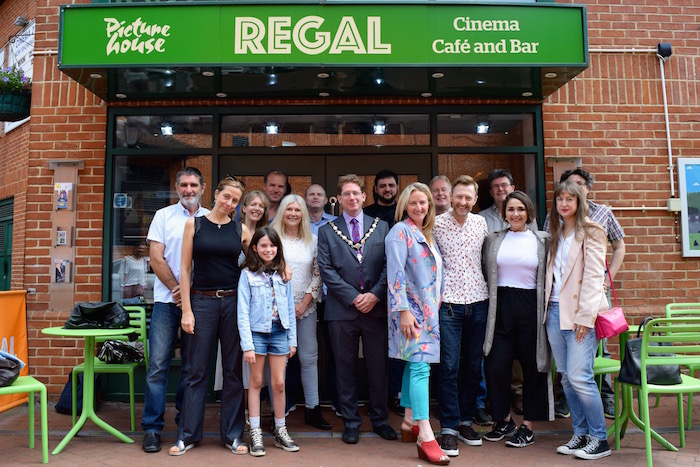 Local film fanatics were in for a treat on Saturday (9th June) when the Regal Picturehouse screened the world premiere of ‘Entrance No Exit’. The short film, created by local director, Jo Southwell and local writer, Sophie Dix, had the packed-out audience chuckling at the OCD comedy set on an aeroplane.

The film follows the journey of Helen (played Michelle Fahrenheim), and her experience of a plane bathroom (to which anyone who’s ever flown can relate!) Mayor Glen Lambert was amongst the spectators, and thoroughly enjoyed the show.“It was really well made, well crafted and professionally done,” he said. “We’ve all been in that situation, and you really feel for her.”

The 15 minute film was the result of a crowdfunding campaign, and produced on a relatively small £4,000 budget. Shot over the two days in April, it was an intense process for the number of cast, extras and crew involved. Nadia Lamin, who played the air hostess and assisted in pre-production, remarked, “I was overwhelmed by how many people it took to make the film. Everyone had a purpose; they knew what they were doing and just got on with it. Everyone was amazing; we all got on well and it was really lovely.”

Director Jo Southwell, who also produced the film, began the screening by thanking the many people who’d be involved. Afterwards, she explained, “All the crew just fell in love with the idea of making it and we all collaraborated really. I’ve been really blessed with all the people I’ve met as a result of it.” Jo added, “Some of these people I haven’t met until today because they’ve all jumped on board and said yes Jo, we’ll help you make your film, which is just amazing. They’re all people who I hope we can work together again.”

The film features a number of familiar Henley faces. Christine Hopcroft, a Henley resident, was one of the extras, and said, “It was an honour to work with Jo, and a real bucket list thing to be in a film.” Entrance No Exit received a great deal of support from local people and businesses, including Henley College Media students; former Mayor Kellie Hinton and Councillor Dave Eggleton; and local companies MadeForDrink, ConoSur, RAMS Rugby Club and IBS Office Solutions.

Entrance No Exit is now set to take on the film festival circuit. Jo related, “We don’t know how many yet, but we’ve submitted to some of the BAFTA recognised film festivals. I’d love, whether it was from an acting point of view, or the writing, anything, to get some kind of recognition, because I feel it’s a very strong British comedy. We’re going to submit to all kinds of British film festivals, and then we’re hoping to smash America as well!”

The short is already proving to be a springboard for more creative projects, having gained Jo and Sophie an invite to the Breaking Through The Lens event at the Cannes Film Festival. The talented duo pitched their feature film, Mac & Beth, and now have a platform to complete the project. “Yesterday we had a really successful meeting in London, and a very big production company from LA and London have said they want to come on board as a co-producer,” Jo revealed. “We want to shoot within 12 months, and we’re obviously talking to the Mayor because we need locations in Henley. He’s going to help us hopefully arrange that.” Mac & Beth is an OCD love story set in the theatre, again written by Sophie and directed by Jo. Much like their short, it’s a funny, quintessentially British film, and if Entrance No Exit is anything to go by, is set to be another side-splitting success.

And as to how they managed to fit a camera, crew and actress into a plane toilet? With a sly smile, Jo says, “Secrets of the trade!”

Stay Safe On The Roads In Henley
Scroll to top