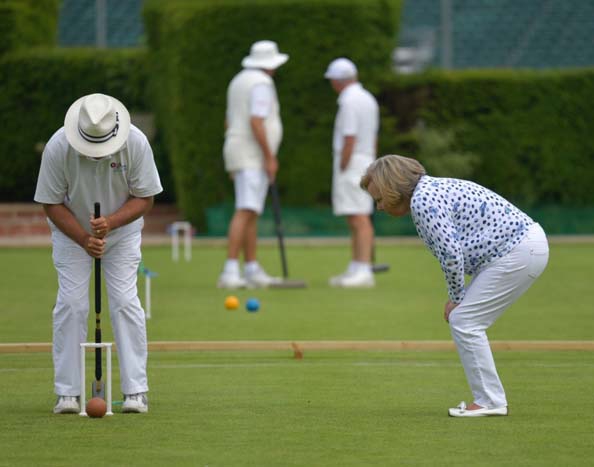 Phyllis Court ‘A’ beat Surbiton 5-2 on Saturday in the first round of the National Inter-Club Championship.

With the courts in tip-top condition, hoops set firmly in new holes and the forecast ‘scorcher’ tuning out to be ‘comfortably warm’ instead, the scene was set for an entertaining match between two evenly matched teams.

PCC’s no. 3 Ian Norris was first on to the scoreboard with a 7-5, 7-3 win over Surbiton’s George Noble, and then the hosts stretched their lead with victory in the doubles rubber.

The doubles was extremely close with PCC ‘getting out of jail’ at the 13th hoop in the first game to crown a good come back, and similarly Charlie Von Schmieder and Chris Roberts had to come from behind to beat Nick Cheyne and Ed Dymock in the second game 7-5.

Don Beck gave Surbiton some hope by scoring with a bouncing jump shot at hoop 13 in his first game against the in-form Roger Goldring, but the Phyllis Court man won the second game quickly and the third rather more long windily as lunch spoiled.

Leading the over-all match 3-0 at lunch meant that Phyllis Court needed just one more win from any of the afternoon’s singles rubbers and it was Goldring who brought home the result with a straight-games win by 7-2 and 7-5 over Noble.

Beck got one result back for Surbiton with a 6-7, 3-7 win over Norris before Roberts drove home the result for the Henley team with a 7-3, 7-3 defeat of Dymock.

England reserve player Cheyne was more accurate with his clearances against Irish international von Schmieder and won the last rubber to finish 6-7, 4-7.

The final match score-line of 5-2 was adjudged by all to be a fair reflection of the action and Phyllis Court will now face Sussex County CC from Southwick, near Brighton in the next round at a venue and date to be agreed.

Leading 3-1 after the two doubles rounds, the killer blow came with the first singles when the ‘C’ won all four games, before halving second round of singles to complete the comfortable victory.

Raghu Iyer and Dianne Browne both won both their singles and Browne actually won both her doubles games too.

The internal tournament programme at Phyllis Court sported another event on last week when Hugh Crook won the Red ball Trophy for the 3+ Singles, which is restricted to players with handicaps of three or more.

Only in his last games did Crooke lose his 100% record when he was undone by the improving Browne, now playing a more considered game that has been rewarded by a handicap reduction to 5 for the first time.

Staying with golf croquet but further afield, Phyllis Court players have been very active around the country with Raouf Allim and Chris Roberts recording valuable third and fourth places at the Wrest Park (Bedford) and Cheltenham Opens respectively – valuable because semi-final finishes are likely to qualify the pair the end of season English National Singles Championship.

Also in GC Series action last week were Roger Goldring at Cheltenham, Colin Morgan in the Roehampton B-Level and debutant Steve Morton at the Guildford C-Level.

Turning to the Association Croquet code, Phyllis Court’s team got off to a good start in the SCF Handicap league on Monday afternoon with a 3 – 1 win over Caversham.

Chris Roberts, Frances Colman and captain Raghu Iyer all won comfortably their games enough but there was a surprise when Richard Peperell’s recent good form that had seen excellent performance around the country in recent weeks, deserted him on home turf.

Peperell had reduced his handicap by two grades in a fortnight thanks to second place finishes at Budleigh Salterton and Ryde on the Isle of Wight coming on the back of his tournament win at Roehampton last month.

Also away from Phyllis Court, there was success for Roberts last week, who won an AC handicap tournament at Newcastle upon Tyne, thanks in part to clubmate Colman beating a rival in the last round of the three day event.