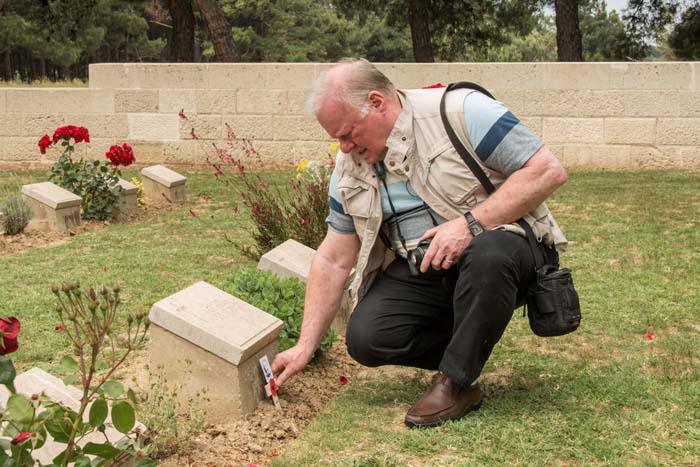 After many many years of researching local WW1 soldiers and visiting thousand of graves, Mike Willoughby and his wife Lesley from Henley Lest We Forget (HLWF) have just returned from their most memorable trip to Gallipoli.

Armed with a list of 70 local soldiers and rowers graves to visit, the trip started at the Redoubt Cemetery in Helles where Mike laid a poppy cross on the grave of Captain Arthur John Walker.  Arthur joined the 11th Service Vattalion Yorkshire Regiment as a 2nd Lieutenant aged just 18 and rose to the rank of Captain (probably the youngest in the British Army) a few months after joining.  In 1915 he was selected for service in the Dardanelles, arriving in Gallipoli where he was attached to the 6th Battalion Manchester Regiment.  Arthur was killed in action on 7 August having served less than three weeks.

Captain Walker’s father, John, the local Barclays Bank Manager at the time, donated the land to Henley town on which the War Memorial Hospital was built, in memory of his son, which was opened on 3 June 1923.  Arthur was honoured with a special service organised by HWLF in August 2015 at Holy Trinity Church to commemorate the 100th anniversary of his death.

Following his research of Leander Club rowers in 2015, Mike was invited by the club as a guest on a trip that they were organising to Ypers and the Somme which was led by Nicky Bird of Bird Battlefield Tours who is also a Leander Club member. Mike was very impressed by the trip and especially Nicky’s planning of the tour. When he returned home he waxed lyrical about the trip to Lesley and his family.

Mike said, “For numerous reasons we thought Gallipoli would elude us.  However for my 70th birthday last August, my daughter Jenni gave me the biggest surprise.  She handed me an envelope with a piece of paper inside with a telephone number on it which was Nicky Birds’.  Unbeknown to me she’d contacted Leander to obtain Nicky’s details and paid for and organised for Nicky to take Lesley and I on a bespoke trip to Gallipoli.”

Nicky recommended that May was the best time to do the trip and by this time Jenni had been talked into by Mike and Lesley to join them.

Work is nearly complete on the new HLWF Great War Memorial which will be unveiled by the Lord Lieutenant for Oxfordshire in November at Townlands Memorial Hospital.  It will contain the names of all of the men of Henley who died in WW1 including 13 more that have been discovered since the memorial plaques were created in 2014 which were installed in the Town Hall, St Mary’s and Trinity Churches.

“It was a trip of a lifetime and I’ve returned home having taken over 700 pictures.  My favourite picture is the one taken (above) of me at Captain Walker’s grave which was an extremely fitting start to the most memorable trip,” added Mike.

Henley Lest We Forget will be hosting the Rowers of Henley & the Thames who died in WW1 exhibition at the Old Fire Station Gallery between 29 June and 9 July.  Open daily between 10.00-7.00pm.