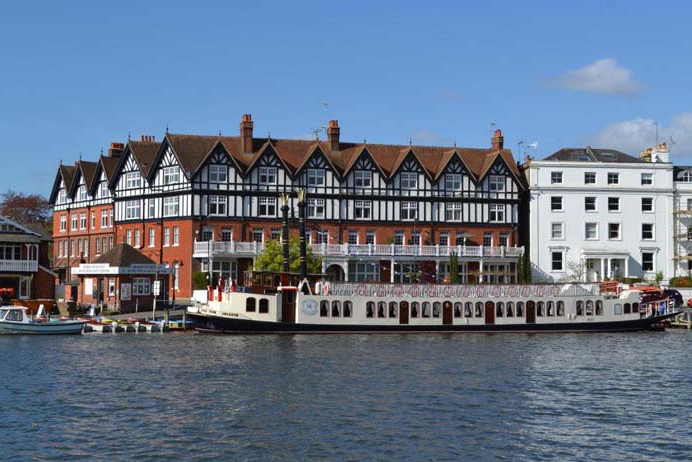 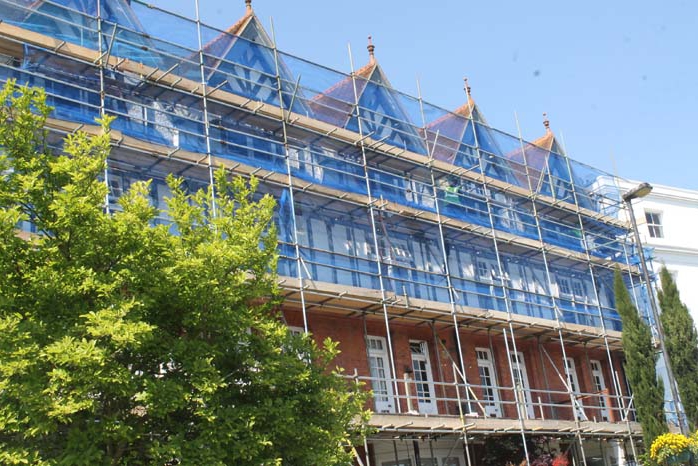 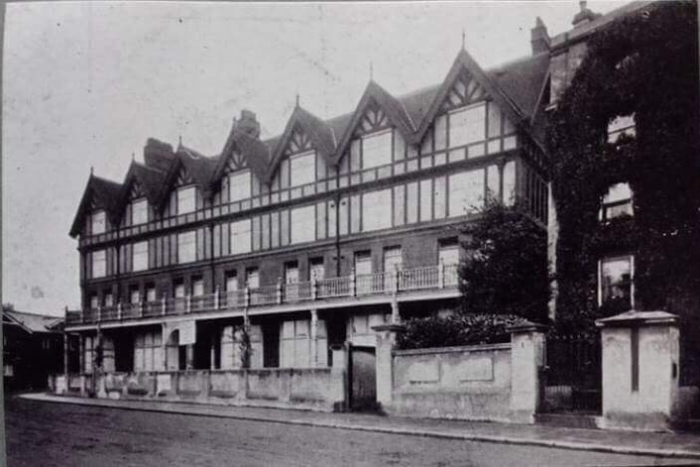 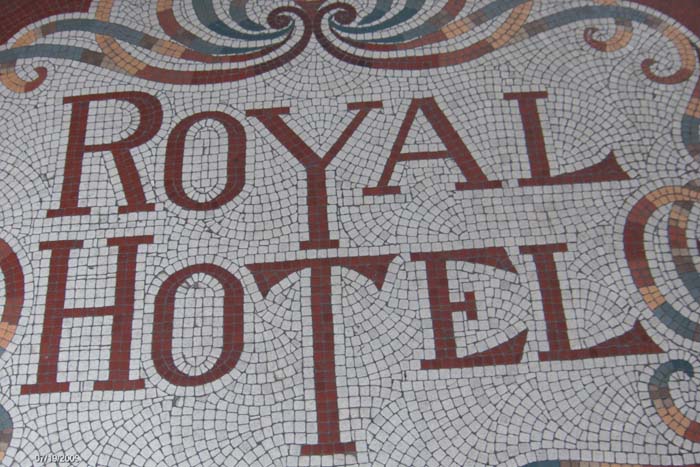 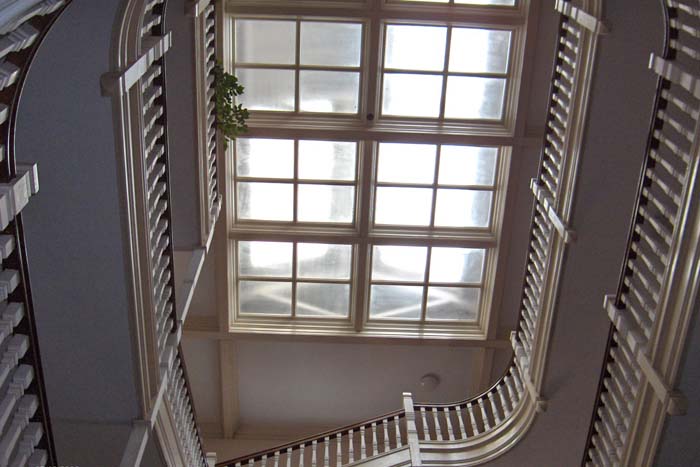 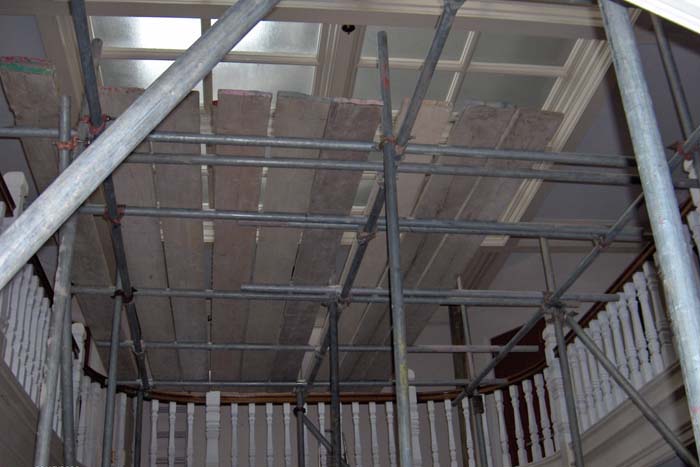 The outside of the iconic Royal Mansions on Station Road which looks out over the river is currently being refurbished.  Originally part of a grandiose private house and then a hotel, this building has some fascinating history.

According to the book Hostelries of Henley published in 2000, Royal Mansions was originally built in about 1864 by Robert Owthwaite, one time Mayor, successful business man and entrepreneur.  Both Robert Owthwaite and his father, also a Robert Owthwaite were auctioneers, furniture dealers and property owners.

The building became The Royal Hotel in 1872 and was extensive and larger than the present and had two distinctive wings (River and Garden Wing). The River Wing faced Marsh Meadows. In the Harrod’s Directory of 1876 it said “the hotel stands in its own grounds of 14 acres which comprises of croquet lawn, beautifully laid out garden with meadow attached.”

Robert Owthwaite (Jr) died in October 1887 but earlier in the year a report in the Henley Advertiser said that “extensive alterations are going on at this hotel which has been purchased by Messrs Holmes, Harper and Neame of the Greys Brewery. The ugly high wall near the station has been cut down, so that the hotel is now visible.”

In 1892 The Royal Hotel was owned by Frederick Trotman and it was never much of a financial success and between 1894-99 it was owned by the Official Receiver in Bankruptcy.  In 1899 it was bought personally by Archibald Brakspear and he had the old River Wing demolished and rebuilt with a row of gabled buildings facing the river which was the hotel accommodation.  The Garden Wing became a detached building and was taken over by the Ursuline Nuns as their convent.

In 1925 the hotel was bought by Brakspear & Co and the hotel accommodation was sold off as flats as they stand today.  The main hotel entrance, public rooms and bar continued to be run by Brakspear as a pub until early 1993 when it closed.  In December 1985 it was sold to Lornemall Ltd & Brakspear & Co.  The Royal Hotel name can still be seen on the floor tiles in the entrance (see photo above) and so can the grand sweeping Victorian staircase to all floors.  A glass fronted lift was installed in 2009.

The leaseholders of the flats got together to buy the freehold from Lornemall and Brakspear in January 1990 and formed a property company Roy Mansions Henley-on-Thames Ltd with the 12 residents all having one share and having  a Board of Directors with a 999 year lease.  Overseeing the refurbishment work is Robert Ingram, Chair of the company who has lived in flat number 6 since 2011.

Robert said, “Prior to 2011, the building had really been neglected.  The refurbishment started in 2011/2012 with the Station Road side being renovated (brickwork cleaned and windows replaced) followed by the west and north elevations in 2016.

The current river frontage works, being carried out by Classic Builders from Watlington started in March and is the biggest part of the refurbishment to date costing £250K.  Robert explained, “The mock Tudor timber was partly rotted so is being cut out and replaced.  They are refurbishing the balcony with a new membrane base and wooden balustrades.  The biggest challenge has been rerouting the rainwater drainage system that was originally through a secret gutter which is being kept as we need to preserve the original features in this conservation area.  All of the river frontage windows and doors are being replaced but because they are so big, the contractors have had trouble fitting them around the scaffolding so they will do the installation when this comes down which is planned for no later than 4 July (the start of Henley Regatta).”

Councillor Sarah Miller has very fond memories of living in Royal Mansions both as a child and an adult.  She lived at number 9 Royal Mansions growing up from 1973 to the early 1980s and in 1989 moved backed to rent number 6 before shortly buying it. She left Royal Mansions in 2011 although one day she would love to return.

Sarah said, “When I was young, my bedroom had an old fashioned outside fire escape which I used regularly to nip out and meet my friends at the park for a quick drag of a No. 6 and a sip of sweet sherry!  The flats were huge, the build was once an old hotel so when you walked into the front door of the flat you were amazed to see a 60+ft hallway which us kids used to play cricket in, until Dot and Norman Mitchell who owned the Royal Pub downstairs would bang on the ceiling and ask us to stop!”

In December 1976, Sarah and her family and all the other Royal Mansions residents were evacuated after petrol was found in the cellar and the fumes were deemed so powerful that there was a danger of an explosion. However according to one newspaper report, the emergency services didn’t find the source of the petrol after testing the local garage’s petrol tanks for leaks and when the contractor arrived to clear the liquid it found that it had seeped away after the rain which they then suspected had forced the petrol into the cellar in the first place.

During the years that Sarah owned number 6 she told us that during the Regatta we would turn off the lights and watch the fireworks and all the flat owners with balconies had great parties which we would all attend.  Sarah commented, “The parties were legendary.”

Other residents over the years have included Bungle from Rainbow in Flat 3, the official ‘Queens Thatcher’ in Flat 1 and Viv and Tony Duke who owned Badgemore Park Golf Club lived in Flat 10.

Have you lived at Royal Mansions and have a story to tell? We’d love you to leave it in the comments box below.

Night at the Oscars School Prom
Scroll to top