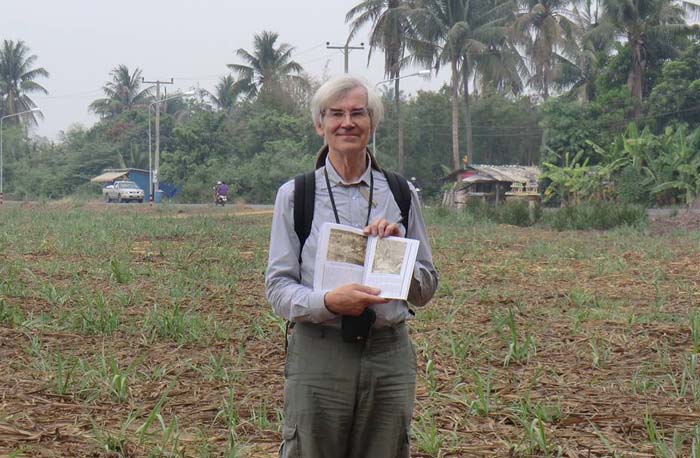 The guest speaker Anthony Wilder gave a talk this month, with the assistance of slides, entitled `POW Sketchbook – A Story of Survival`. The talk was about Anthony`s father, William Wilder, who was a Prisoner of War in the Far East during the Second World War.

William Wilder was born in Wallingford in 1915 and after his early education attended the Fine Art department at Reading University. His first job was a teacher at Culham College of Education but, in 1940 after just one year of teaching, he was called into the Armed Forces where he trained for 1 year as a gunner. In 1941 he set off by ship to Singapore where he arrived, via Cape Town, in January 1942.

William was a person who had maintained a diary throughout his student life and this extended to his career in the armed forces; this was to help greatly in recalling his experiences between 1942 and 1945 and sharing them in later years with his son, Anthony.

In February 1942, Japan attacked Singapore and William along with thousands of others became prisoners and with little food, a small island and very poor logistics starvation was rife.

While William was a POW he was used by the Japanese as an artist and as such was granted access to materials to produce illustrated drawings for the Japanese while, at the same time, producing drawings for himself which along with his diary allowed William to record, illicitly, graphic accounts of his day to day activities as a POW for the whole of his period in captivity.

In March 1943, the British captives were loaded onto cattle trucks and taken by railway on a 4 day and 4 night journey, standing all of the way, through Malaysia to Thailand to work on the Thailand to Burma railway for the specific purpose of providing the Japanese access to attack (British) India. The Burma- Thai railway was 258 miles long, including the bridge over the River Kwai and the Wampo viaduct, and it also became known as the Death Railway because of the high attrition rate – the British POWs comprised c.30,000 and their attrition was 22% while the Malay prisoners were c.50,000 and experienced  56% attrition.

Anthony gave specific details of certain entries in his father`s diary some of which were quite horrific but others were very humorous.

The bombing of Hiroshima in August 1945 allowed the Prisoners of War in the Far East to be set free. William together with his diary and illustrations returned to Oxfordshire in November 1945 to allow him to restart his family life.

Anthony was thanked by the Probus members for his talk and congratulated for having been able to sit with his father and extract so much detailed information on nearly 4 years in captivity.