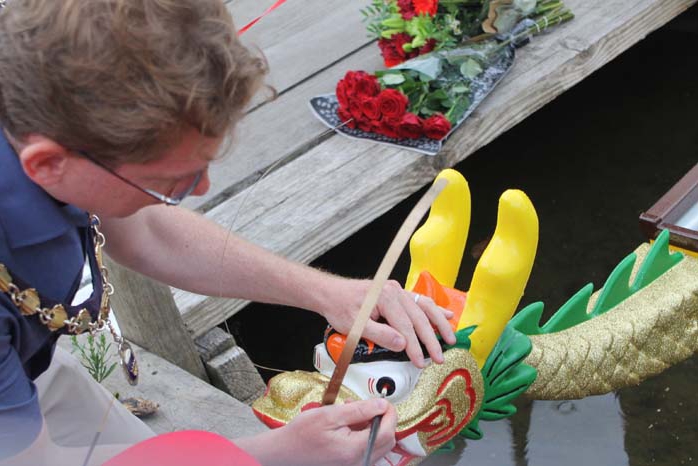 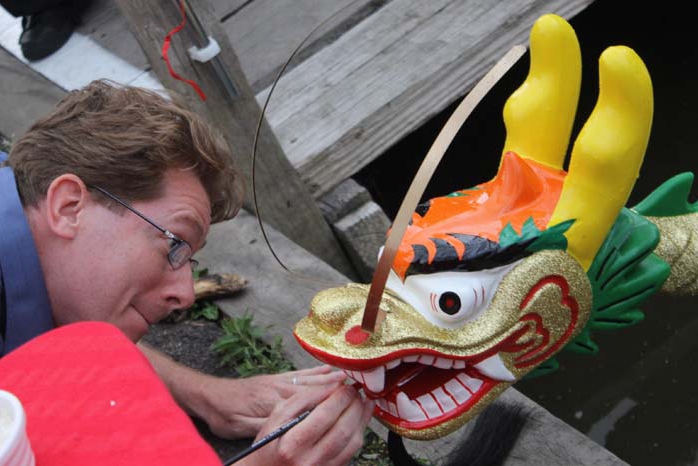 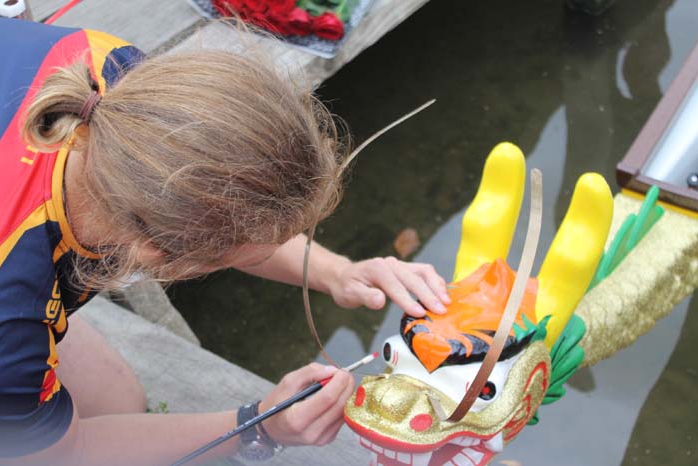 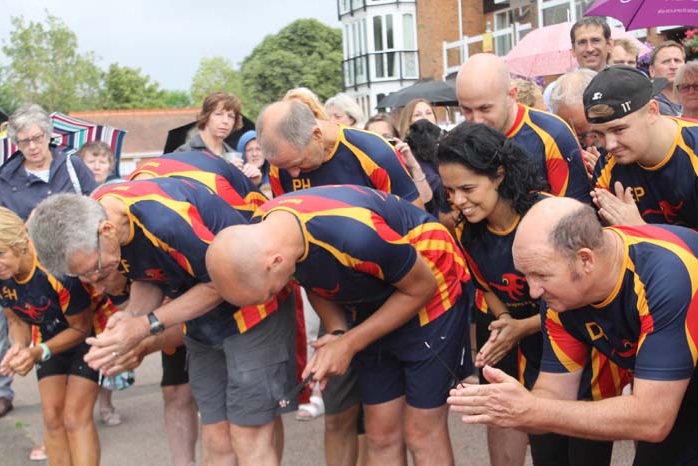 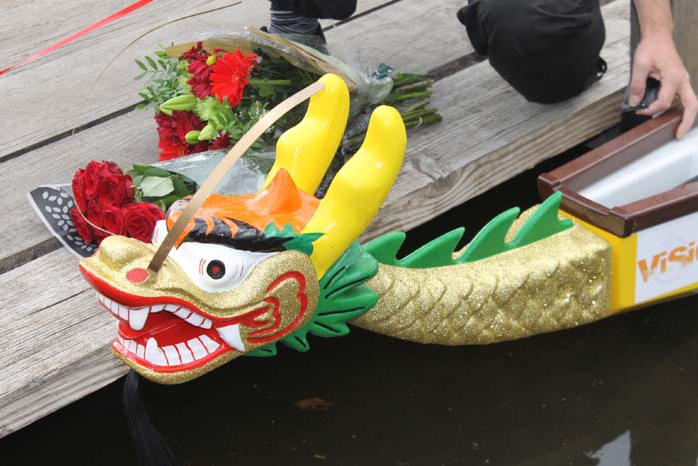 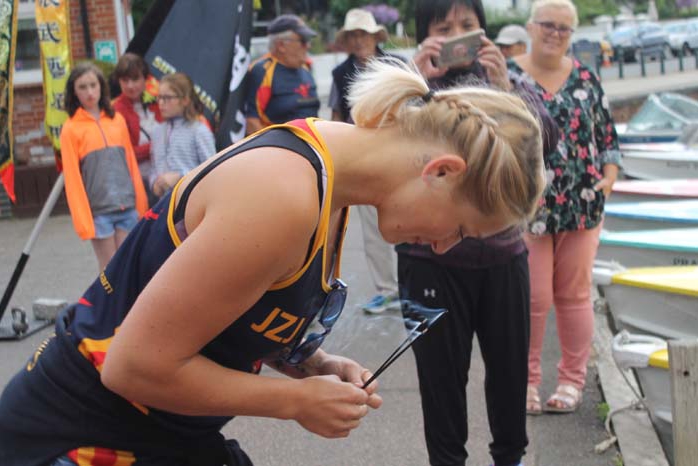 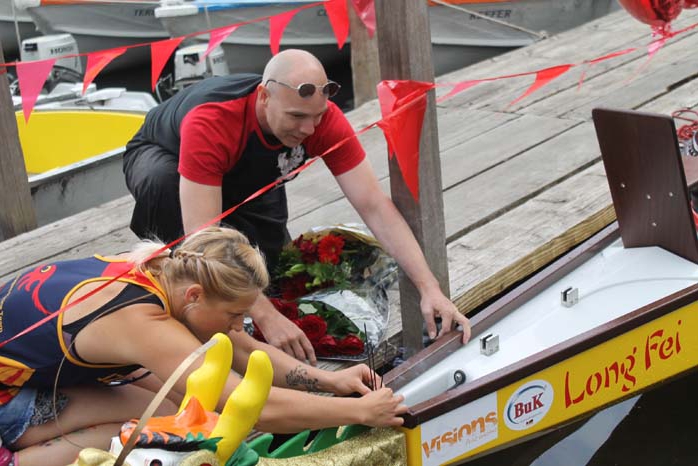 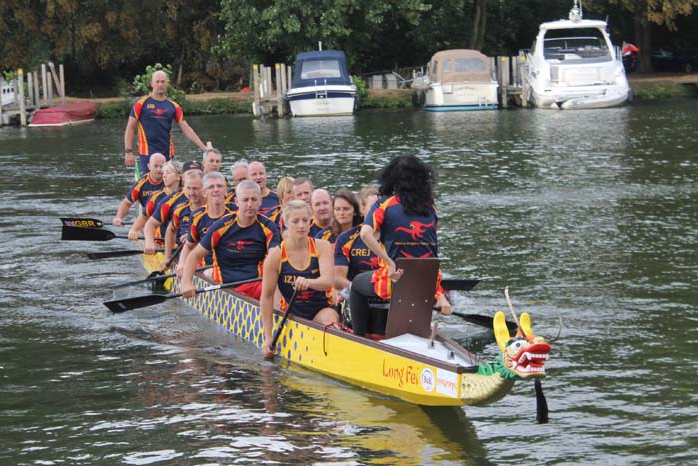 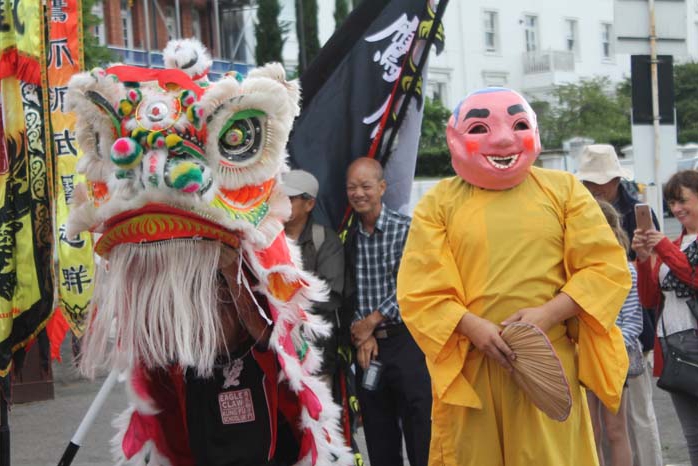 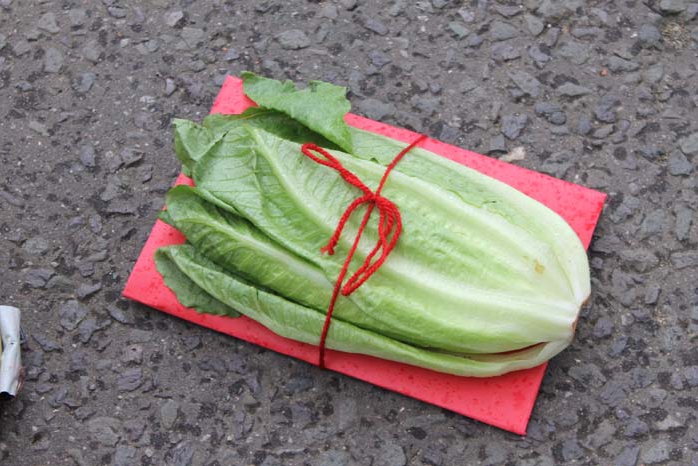 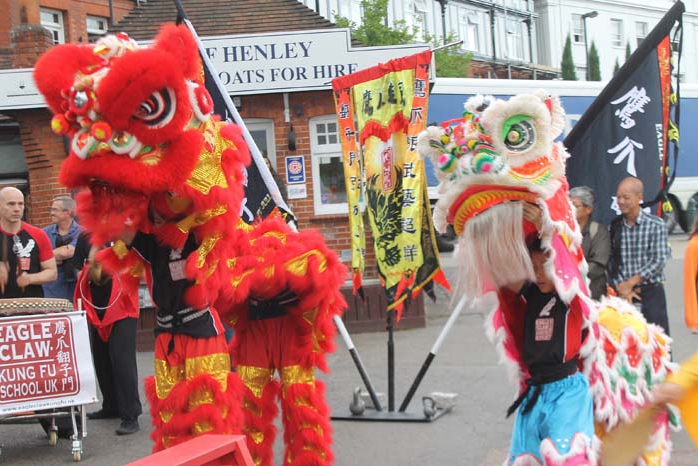 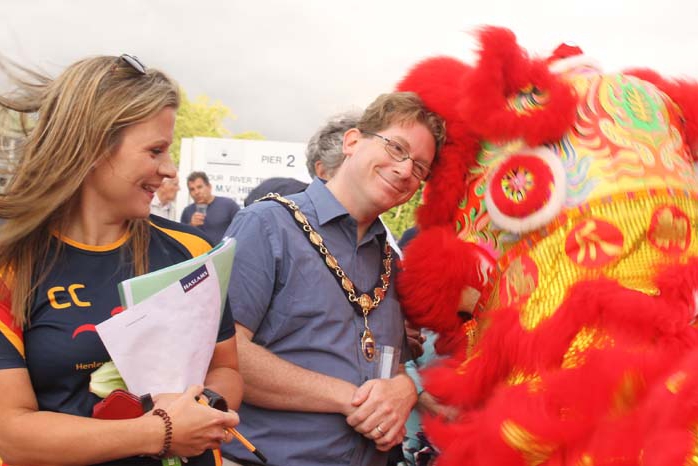 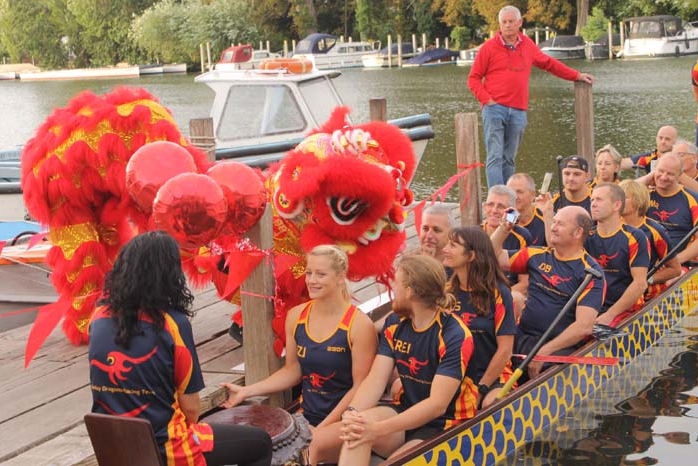 The Henley Dragons Club will be ‘flying’ now in their new Long Fei (Flying Dragon) boat which was unveiled at an ‘Awakening of the Dragon’ ceremony on Saturday.

The new light weight boat, costing £6, 500 has been raised by the Eyot Centre where the club is based through fundraising which has included hosting and running the Henley dragon boat racing winter series from October to February.  The club currently has 60 members and has three dragon boats – this new one replaces an old heavy one.

The history of dragon boats can be traced back to more than 2000 years ago, along the banks of the life-sustaining rivers in Southern china, such as the Chang Jiang (now the Yangtze). The dragon boat with ornately carved Dragon’s head and tail, was used for religious purposes as a way of appeasing the rain gods. Cat Cassell, Secretary at Henley Dragons said, “The ceremony is all about respecting the dragon and getting it into a good and friendly mood towards you, the team and the community. Opening the dragon’s eyes will ward off evil spirits and prepare the river for voyage. The ceremony not only blesses and cleanses the area for competition, but also the spectators and competitors.The Henley Dragons want the dragon’s protection for all our training and racing to come.”

At the start of the ceremony, key players from the Eyot Centre; Pete Holloway, Derek Blincoe and James Blake placed flowers next to the new boat to show that sacrifices are made towards the dragon as a sign of respect.  Club members then lit incense sticks and bowed to the dragon boat after which three sticks were attached to the front of the vessel.

Traditionally a Taoist priest performs the eye dotting (adding a red dot) – this special privilege was given to the Mayor of Henley, Councillor Glen Lambert on Saturday and youngest member of the club at the ceremony Connor Jones each painting one eye each.  The Mayor then added a dot to the horn and a line in the dragon’s mouth.  Pete Holloway was asked to add a red dot too to each of the dragon’s horns.

The Eagle Claw Kung Fu team from Maidenhead then performed a lion dance, called ‘Eating the green’ (a lettuce). The lion is a protector who keeps bad luck away. In the dance the lion eats the ‘green’ and then he spat it out over the crew, the boat and the VIPs to bring good luck and fortune.

The crew then paddled the new dragon boat three times backwards and forwards towards the jetty to symbolise the dragon bowing to the audience.  The boat was then paddled off down the river.   This allows the dragon and the spirits of the water to be introduced and know where the dragon will be moving around.

Glen said, “I hope I have awakened our newest dragon more successfully than I awaken myself on weekday mornings! I read up a little on dragon boat history and was surprised to learn it dates back to ancient China more than 2,000 years ago, so I really am honoured to be part of it. I’d just like to thank Hobbs of Henley, who do so much for the community, for facilitating the ceremony as sponsors today. Also the coaching team at Henley Dragons and, of course, the Henley Dragons racing team itself who race in the British Dragon Boat Association Premier League. Henley Dragons provide a team water sport, accessible to all, every Thursday at 7pm and Sunday’s at 10am if anyone is interested in taking part – don’t worry, human sacrifices are no longer tolerated!”

Cat Cassell said afterwards, “The Henley Dragons have a growing, thriving team which is full of potential, so the addition of a new dragon boat will enhance the facilities of the club, enabling us as a team to be more competitive, nurture and develop the skills of the team. As the Eyot Centre in Henley is all about the youth, and encouraging them into sport, this purchase gives identity to our club and furthermore enhances our training and competitive abilities when we compete in the BDA league. We are a team and Centre who value the youth’s involvement, and so listen to their ideas, as the young people will be the future of the club, so they should be involved in shaping it going forward.”

“I am really pleased with the Naming Ceremony and have had some lovely feedback from not only the Centre, but the local community too. The Eagle Claw Kung Fu dancers put on a brilliant spectacle for the event and led us beautifully through the ceremony. A huge thanks to Hobbs of Henley our sponsors for the event for providing the perfect location for this event to take place.”