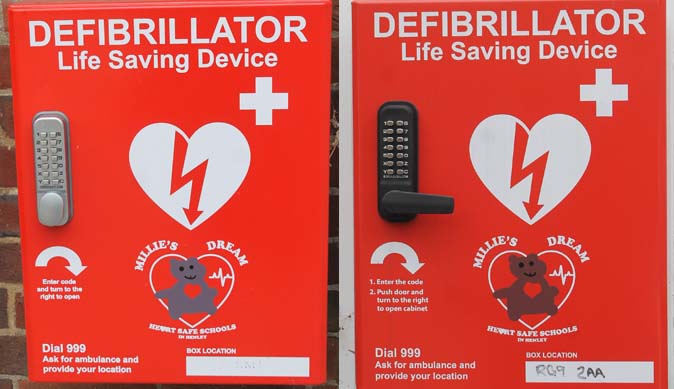 It is with great sadness that we report that a retired gentleman who was a former Henley Waitrose ‘Partner’ passed away after having a cardiac arrest whilst shopping in the store on Friday evening.

He was treated at the scene with CPR and with a Millie’s Dream defibrillator from the box located outside the HSBC bank in Market Place and was taken to Royal Berkshire Hospital where he later sadly died.

Sarah Roberts from the charity Millie’s Dream who have provided defibrillators around the town was one of the first people on the scene with her daughter Millie who the charity is named after as she has a life-threatening heart condition.  Sarah said, “This is the first time one of our charity’s defibrillators have been used and it is ironic that Millie herself ran to get it.  She was absolutely brilliant and ran with speed to collect it whilst staying so calm.  Everyone did everything they could.  It is so very sad to hear the news that the gentleman passed away in hospital later that day. I have though learnt a lot from this experience.  When Millie got to the defibrillator box we lost vital time with her trying to open it as the older boxes have a metal lock on them unlike the newer ones which just have a simple door handle. Millie’s Dream has some limited funds in reserve which we will use to replace the older and more tricky door locks.”

There are four other public Millie’s Dream defibrillators in Henley town centre – Rupert House School, Townlands Memorial Hospital, Over 60s Club in Greys Road Car Park and outside Higgs Group on the Reading Road.  Sarah commented, “This very sad incident has also highlighted that although we thought that the town is well covered and that the critical 8 minutes to get to any one of the defibrillators this has shown it takes longer than you think and we really do need more. More education and funds are desperately needed to maximise possibility of a successful outcome in the event of sudden cardiac arrest. Many people are frightened by the thought of using them and I will be talking with Suzanne Stickley from First Aid Matters on how we can help get more people in the community educated.”

A code to open each defibrillator is there to ensure against theft, however Sarah isn’t clear that when you dial the emergency services that a) they know where the nearest one is and b) they know the correct code.  Sarah knew the code on Friday but will also be checking that all records on the system are correct.

Sarah told us that she spoke with one of the Waitrose managers who told her that the the company are looking at a national initiative to provide defibrillators in all their stores.  Sarah has suggested that they are made public and that the one in Henley could therefore cover both the store and the public car park.

Our thoughts are with the family.