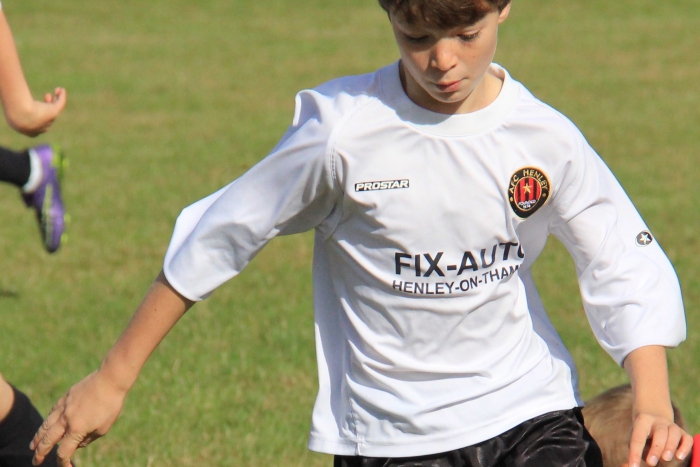 The U12 AFC Henley Hurricanes suffered an opening day defeat at the hands of Bracknell Town in their East Berks League One match at Jubilee Park.

Optimism was high in the Hurricanes ranks as the squad had received a significant boost in the Summer transfer market with 3 new signings.

However, this optimism was short lived as the age old problem of starting slowly came back to haunt the home side as they found themselves one down inside the opening minute of the game after a well worked goal by the opposition.

This early blow stung the Hurricanes into action as debutant Ethan Holliday drove the hosts forward from the centre of midfield. Fellow newcomer Oliver Colvin also impressed on his first start for the Hurricanes as he made a number of incisive runs from his number 9 role up front giving the visitors’ defence a torrid time.

Slightly against the run of play however Bracknell scored again after the Hurricanes failed to clear their lines as the ball shot around their penalty box in pinball fashion before falling to a Bracknell player who made no mistake from close range.

Again the Hurricanes rallied though with Alec and Henry Steel doing sterling work up front and on the left wing respectively as they endeavoured to get the hosts back in the game.

It was clearly not meant to be for the Hurricanes as a missed clearance by the home defence let in the Bracknell attack for a simple third and they found themselves 3 0 down.

The last of the newcomers was Sam Robinson and he slotted into the left side of midfield like a well fitted glove. His marauding runs and electric feet were too much for the visitors defence and his efforts were duly rewarded with a debut goal of the highest quality. Tom Yeoman sent Robinson away down the left and the pacey winger left a trail of destruction in his wake as he arrowed in a left footed drive across the keeper and into the far corner of the net.

The 3 1 half time score line was somewhat harsh on the home side and they started the second half in confident fashion. Tom Atkinson was delivering corners with his usual pin point accuracy and Yeoman was unlucky not to convert at least one of them on a number of occasions.

Joe Turner was proving to be a real handful up front and he too was desperately unfortunate not to notch a goal as he raced away from the Bracknell defence only to see his effort go just wide.

At the other end of the pitch Ben Horner was having a storming game in between the home sticks pulling off a number of incredible saves. He was being ably assisted by the ever reliable Oliver Saunders who was tidying up all the loose balls and Tom Bonser whose turn of pace was proving a real asset at the heart of the Hurricanes defence.

Try as they might though the Hurricanes could not find a way through the Bracknell defence and the score line remained at 3 1 for the duration of the second half much to the home sides frustration.

Managers Turner and Atkinson were said to be satisfied by the performance and were looking forward to their next game away at Ascot to notch their first points of the season.

If any boy or girl in the Under 12 age group would like to play for AFC Henley then please come down to Jubilee Park (opposite Tescos) on Friday nights at 6.15pm or contact Trevor Howell whose details are on the AFC Henley website.