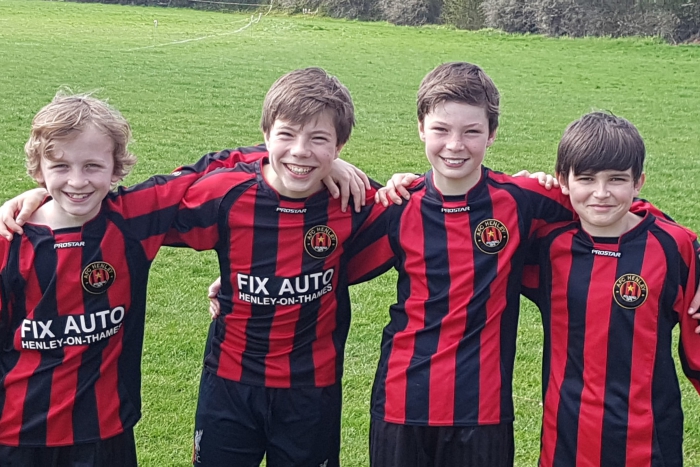 The U12 AFC Henley Hurricanes slumped to their second successive defeat in the East Berks Division 1 league as they went down 5 2 away at Ascot.

It almost goes without saying now that the Hurricanes found themselves 1 down within the opening few minutes of the game as the visitors failed to clear their lines and the Ascot forward line poked the ball home through a crowded penalty area and into the far corner of the net.

This early goal stung the Hurricanes into action and they responded valiantly. Man of the Match Oliver Colvin gave a stunning performance on the left side of midfield and he opened up the Ascot defence with a stunning through ball for striker Sam Winters. Winters showed all his trademark strength to bulldoze his way past the keeper and level the scores up. Tom Bonser and Finnbar Scott were given licence to maraud down the right and left respectively and their tricky runs almost resulted in the Hurricanes taking the lead.

At the other end of the pitch Ben Horner was making sure the Hurricanes stayed in the game as he made a number of good saves that kept the score at 1 1 and he was being ably assisted by both Luca Thomson and Olly Saunders who were being pillars of strength at the back.

The rest of the first half however did not go the Hurricanes way as firstly a long range free kick flew straight in and then a hotly disputed penalty was converted to make it 3 1 before Ascot notched again shortly before the break as they went in 4-1 up.

The second half started well for the Hurricanes as Tom Yeoman burst into the Ascot penalty box before being clipped from behind. Yeoman dusted himself down and took the resulting penalty himself but the Ascot keeper made a good save to keep the Ascot advantage intact.

Ethan Holliday was imposing himself from the centre of midfield as he drove the Hurricanes forward and it was the visitors who were now in the ascendancy. This pressure told and a Hurricanes’ corner was fired into the Ascot box by Tom Atkinson that created mayhem and it resulted in an Ascot defender turning the ball into his own net.

At 4-2 the Hurricanes were right back in the game and Joe Turner was pushed up front in search of more goals. His clever runs and incisive passing created more chances that the Hurricanes were unlucky not to score from. As they piled forward though it left gaps at the back and Ascot scored a late goal to give the score line a very harsh look of 5-2 about it.

Managers Turner and Atkinson were said to be satisfied by the performance and were now looking forward to the Finchampstead game at home next Saturday to notch their first points of the season.

If any boy or girl in the Under 12 age group would like to play for AFC Henley then please come down to the astro turf at Jubilee Park (opposite Tescos) on Friday nights at 6.15pm or contact Trevor Howell whose details are on the AFC Henley website.