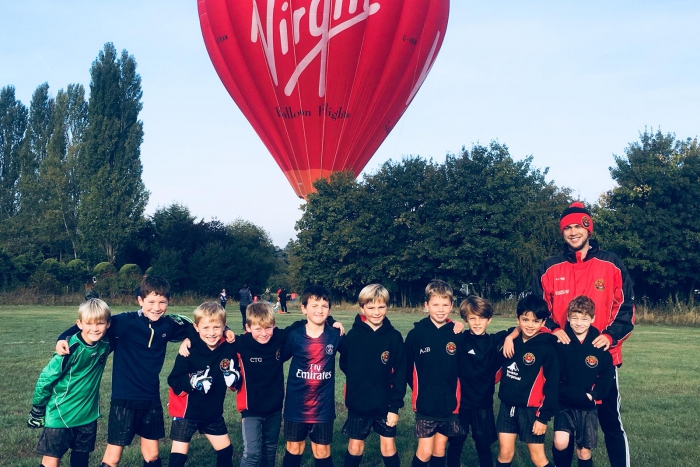 Stand in manager Samuel Bell guides the U9 Henley Hurricanes to win their second match of the season against Bracknell Cavaliers.

There was some pre-match drama at Jubilee Park in Henley as a hot air balloon descended onto the adjacent pitch shortly before kick off, but the excitement didn’t distract them from the game in hand as the Hurricanes got off to a cracking start.

Early shots from Rupert Arsyad and Isaac Walmsley were slightly off target but not long after, Isaac won the ball from a determined defence and kicked it neatly into the net for the first goal. A minute into the restart and Charlie Myers launched a powerful shot from outside the box to bring the score to 2-0. Then striker Rupert had a great run from the halfway line to score his first goal. Joshua Ashford skilfully showed his ability by sending a defender the wrong way and launching a super shot with his left foot forcing a save from the keeper.

Bracknell Cavaliers stepped up their game and fought back, but defender Archie Butlin frustrated the away team with some great tackling, to repeatedly gain Henley possession of the ball.

A break through for Bracknell finally came as they had a run from their own half and managed to knock one past the Henley keeper to leave the score 3-1 at the end of a thrilling first quarter.

The second quarter started with a newly invigorated away side resulting in some end to end football as goalkeeper Charlie Cooper was pushed to make some good saves. However the Hurricanes kept up the pressure with a breakthrough coming from Corben Galloway as he blasted a shot from 20 yards into the top corner of the net. In the final minute of the first half Isaac managed to head a shot towards goal, but the score remained 4-1 going into the break.

With a change of ends, the Cavaliers put Henley under more pressure but some great saves from Isaac (now playing in goal) and consistently strong defence from Archie kept the home team in control. Taking advantage of midfield work from Leo Palmer, Charlie Cooper took on the ball and displayed some superb dribbling, taking the ball around several opposition players and tapping it comfortably past the keeper for goal number five.

After winning the ball, Hurricanes striker Rupert again made a strong run into space and took a long powerful shot on goal, scoring his second of the game and taking the tally to 6-1 at the end of the third quarter.

The Hurricanes started the final quarter with confidence, working well as a team from defence through to attack, with Lorenzo Nicoletti-Dowd helping supply fellow midfielder George Beesley to score his first goal of the season.

As the end of the match approached, Bracknell mounted a last push and a break from one of their players saw a late goal bringing the final score to 7-2.

The Hurricanes can be proud of a good team effort and another solid win for the under 9 Henley side.

Large Tree Falls Down Across Hamilton Avenue
Scroll to top