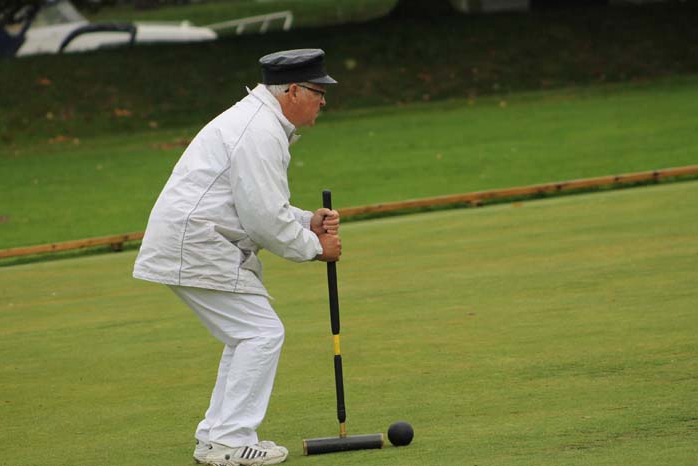 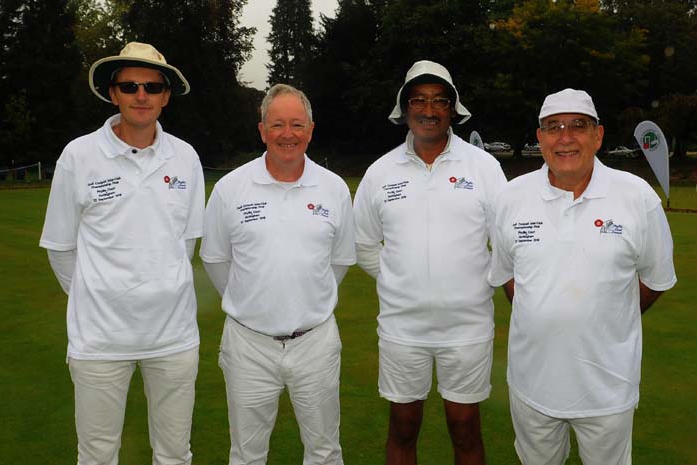 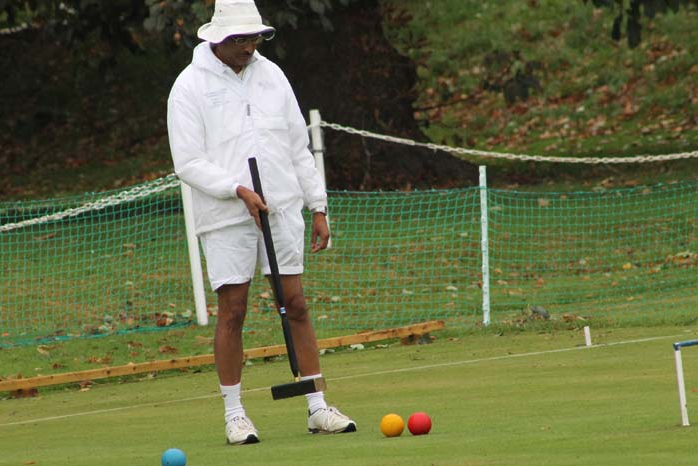 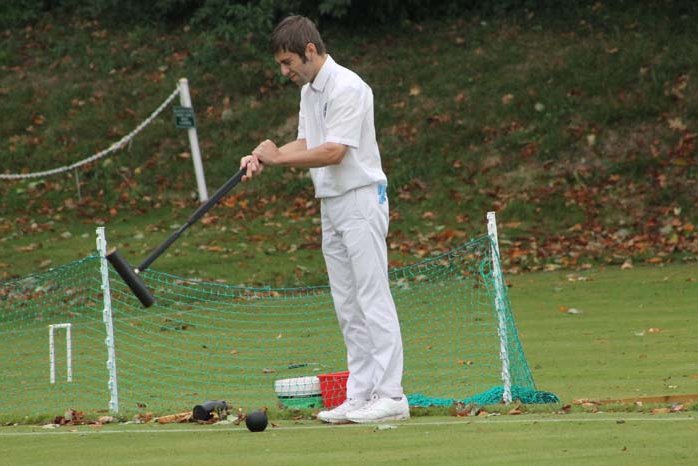 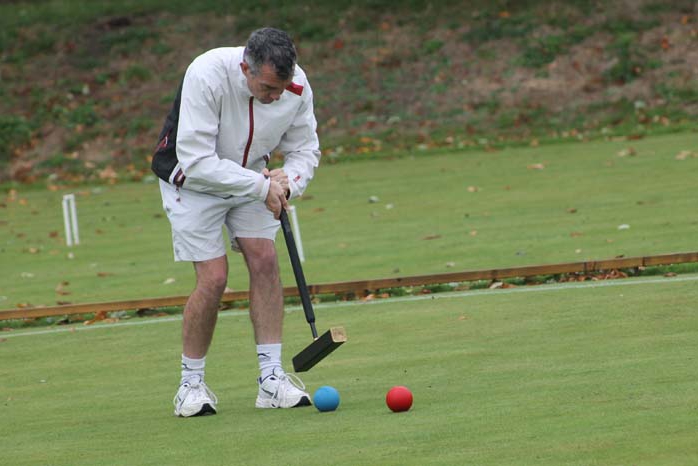 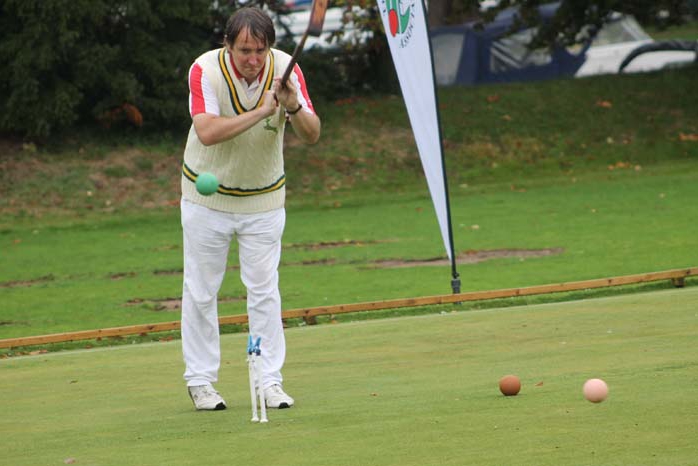 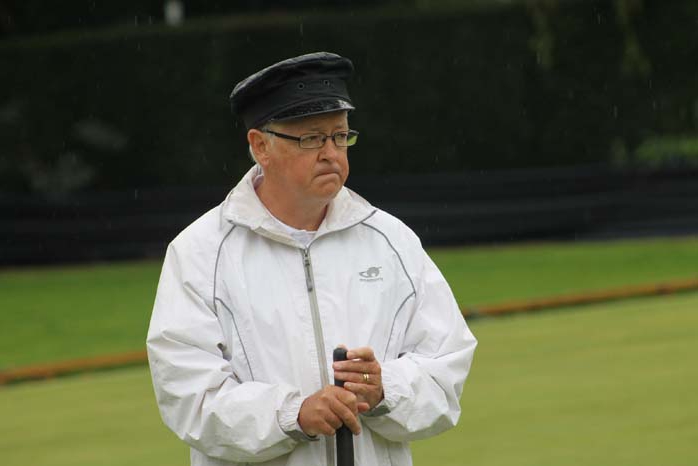 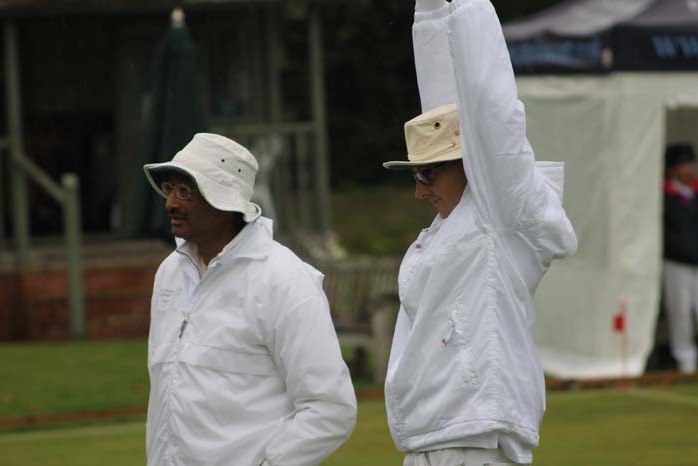 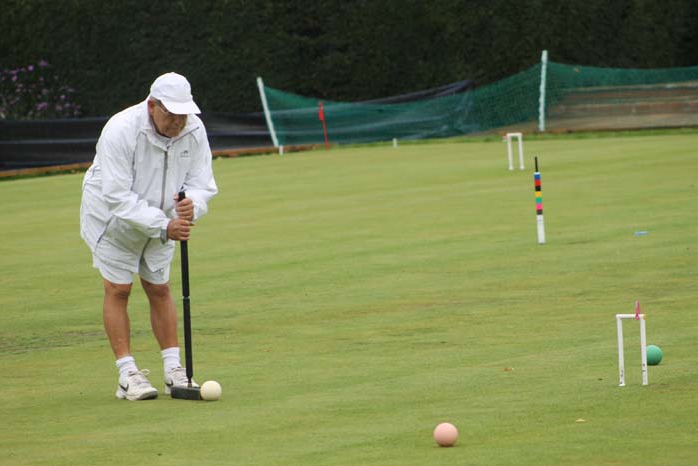 In the biggest croquet match ever played at Phyllis Court Club, it was a such a shame that the rain spoiled the occasion and kept the expected big crowds away on Saturday for the Inter-Club Championship National Final when Phyllis Court Club played Nottingham.

The Nottingham team which featured three internationals and the English Champion were just too good for the Henley side on the day and they won by 5 matches to 2.

Phyllis Club Croquet Club Chairman, Chris Roberts said, “Everything possible was covered beforehand – catch fencing was erected, the hoops were set in new and challenging holes, brand new corner flags, refurbished centre pegs, programmes printed, scoreboard erected and the club even flew the Croquet Association’s flag – but the one thing we had no control over was the weather!”

The Phyllis Court team, in special shirts for the big day, gave good accounts of themselves but their best was not as good as their visitors and all the matches bar one went the way of the National Rankings.

The closest contest was in the remaining morning singles where Chris Roberts took on 16 year-old rapid improver Euan Burridge, and won the first game at the 13th hoop.  Burridge came back well in the second and, after much tactical positional play, Roberts broke a deadlock to win the decider to give his side hope with the overall match score 1 – 2 to Nottingham at half-time.

With four match wins needed for from the title, it was all to play for in the afternoon singles.

In the ‘number 2s’ singles match Allim was first to finish when he lost to the new English Singles Champion Richard Bilton ‘The Biltonator’ who’s accuracy over great distances was a joy to watch.

Playing at ‘number 4’, Phyllis Court’s ultra-steady Roger Goldring was too cool for the more flamboyant young Burridge, and he won in straight games in the one match that went against the National Rankings, and this was an excellent win for Goldring.

With the overall score then standing at Phyllis Court 2 – 3 Nottingham, the match was nearing ‘crunch-time’ with the hosts’ von Schmieder and Roberts each one game down to Welsh international Ian Burridge and GB star Death respectively.

Fittingly it was Nottingham captain Burridge (senior) who, after a tussle at hoop 13, won his match to secure the match for the visitors.

Roberts and Death halted their second game temporarily for the presentations, and soon after Death added another win for Nottingham for a final score of Phyllis Court 2 – 5 Nottingham.

The presentation of the Inter-Club Championship Shield to Nottingham CC was made by the President of the Croquet Association Quiller Barrett, to an audience of 25 or so die-hard supporters many of who had been present all day under umbrellas sheltering from the constant drizzle.

Congratulations to Nottingham, well done Phyllis Court for giving them a good test, and extremely well done to the brave supporters who stuck it out (thank you all).