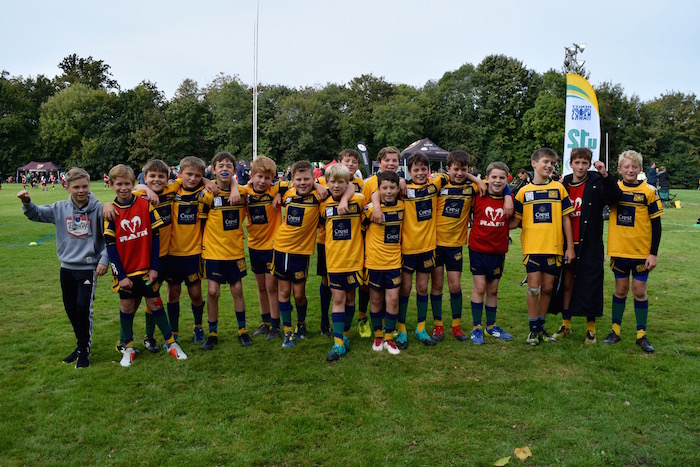 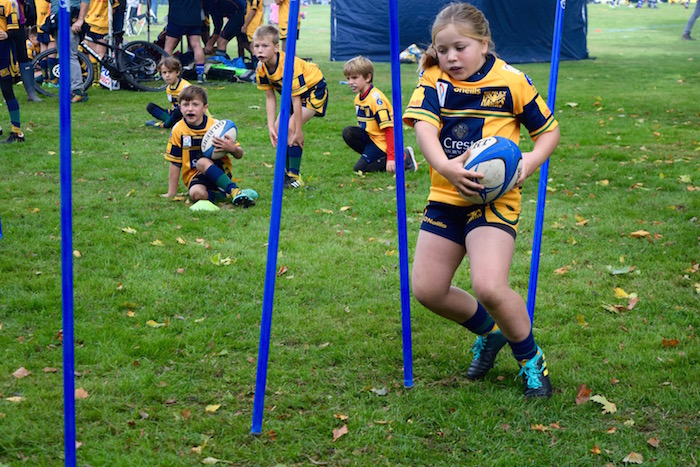 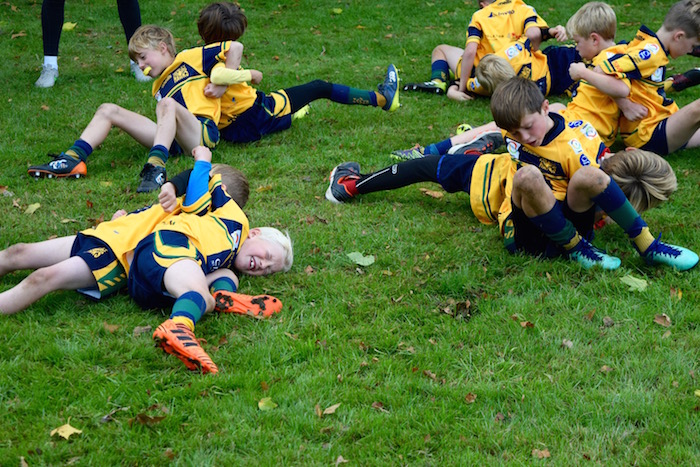 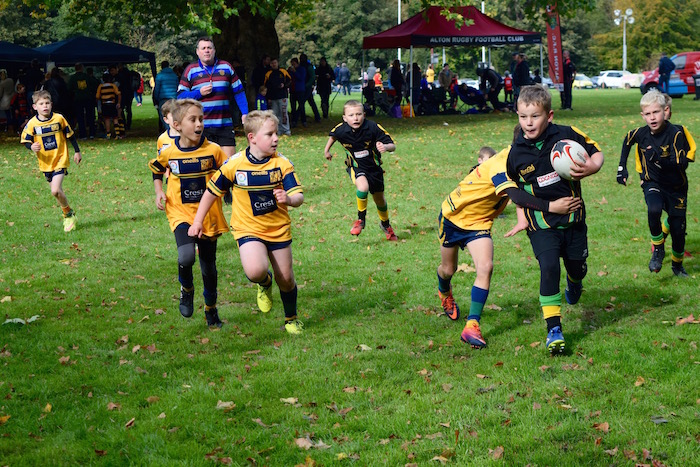 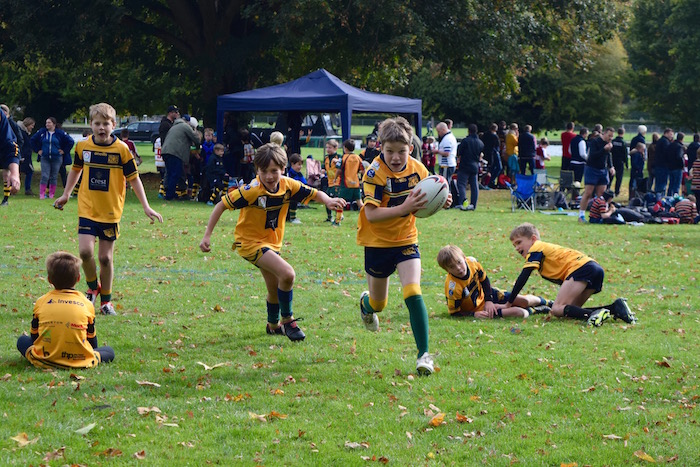 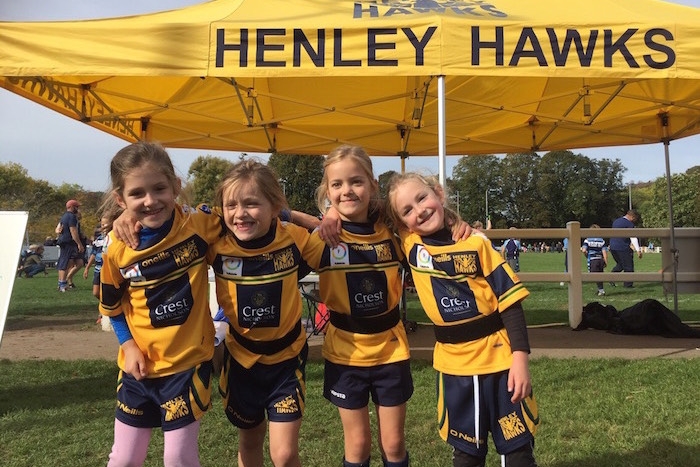 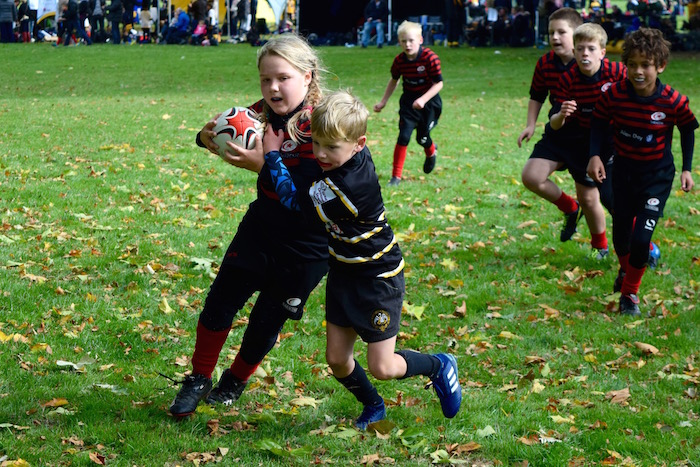 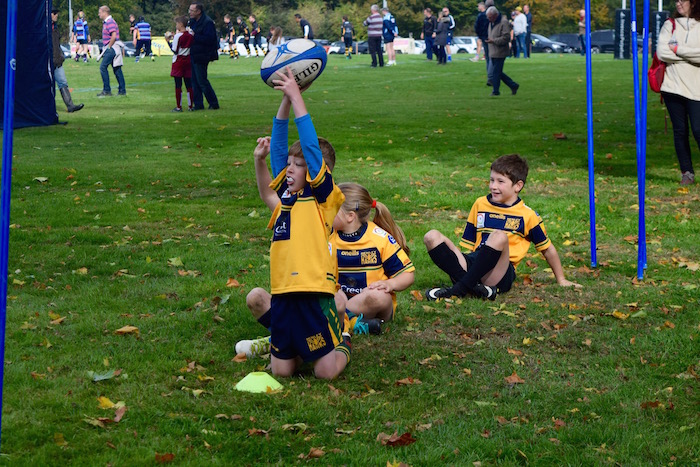 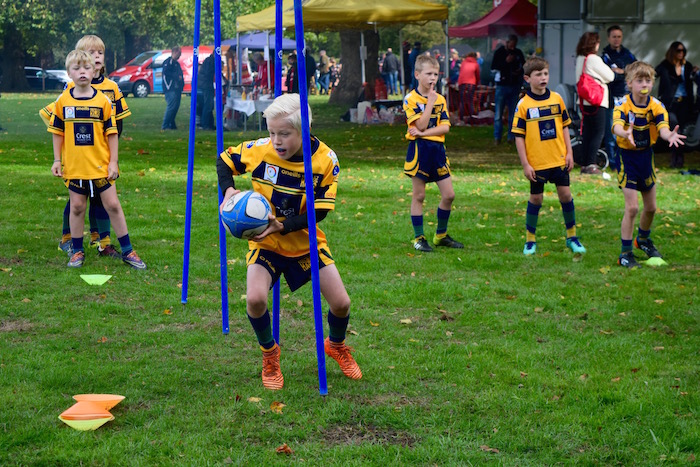 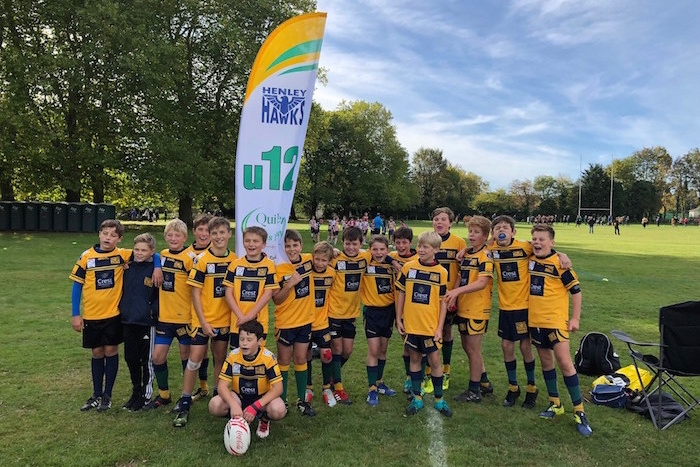 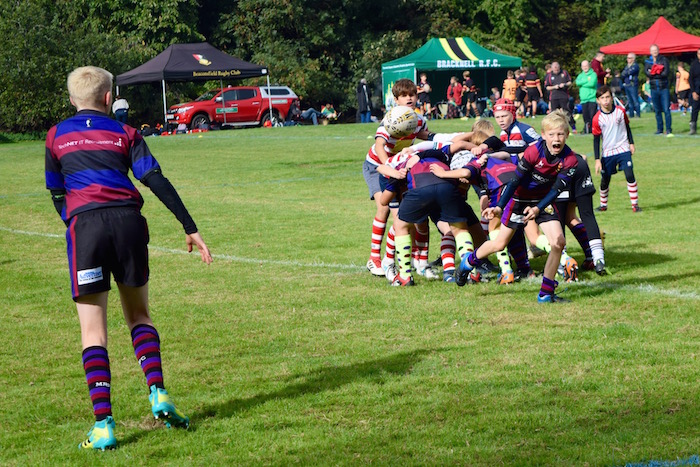 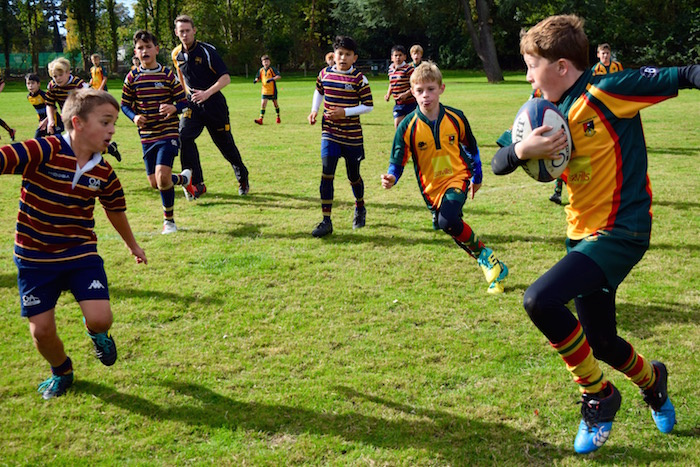 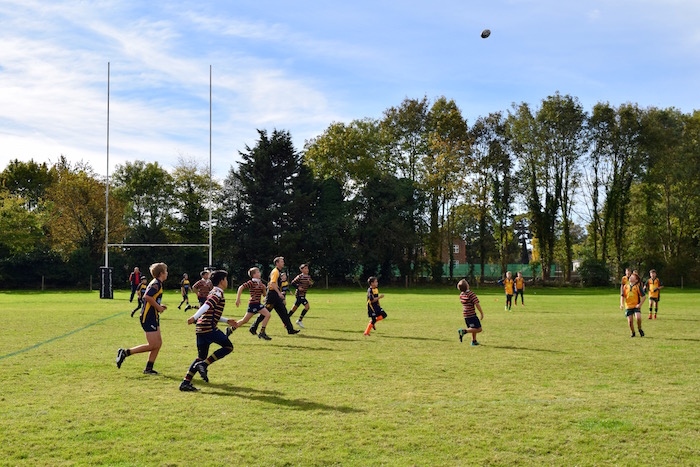 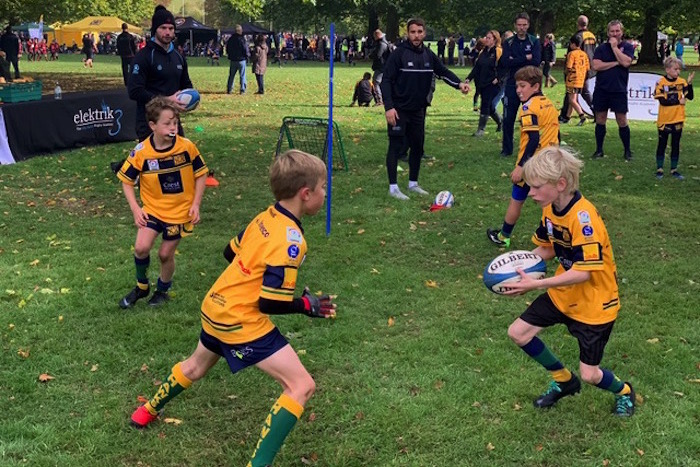 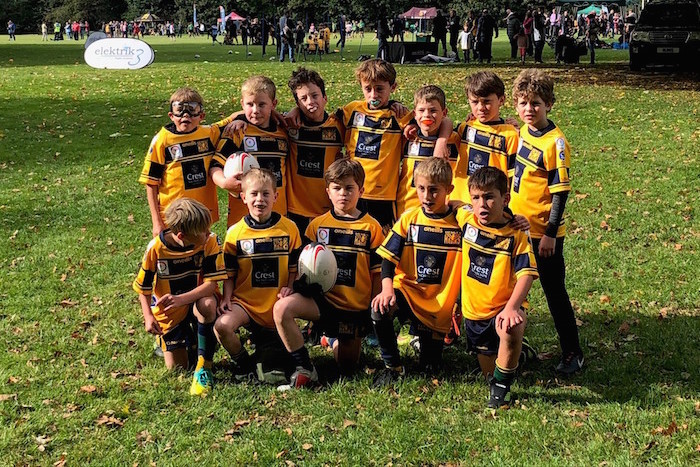 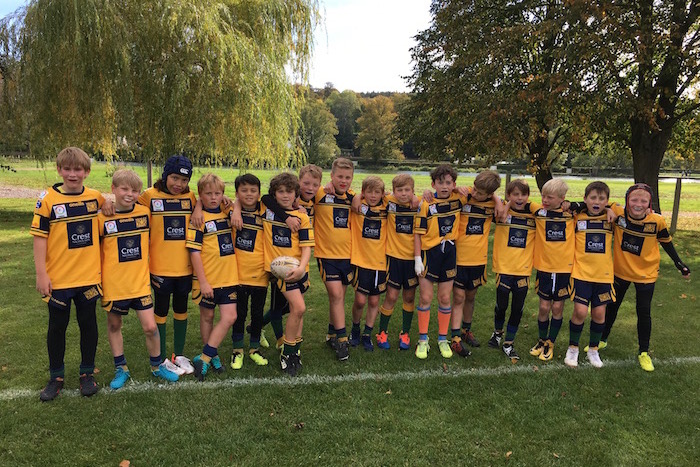 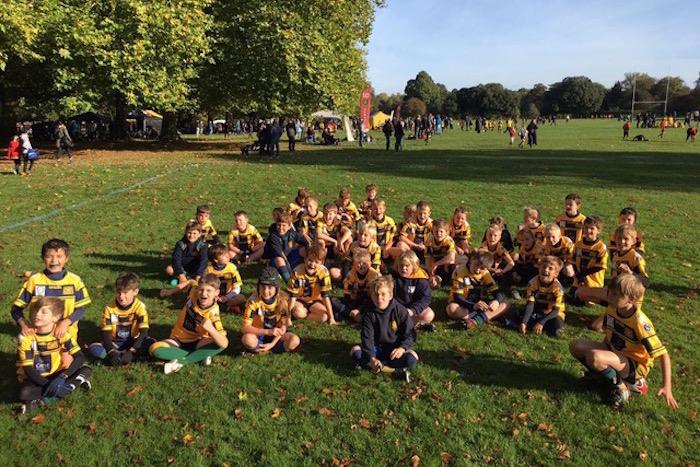 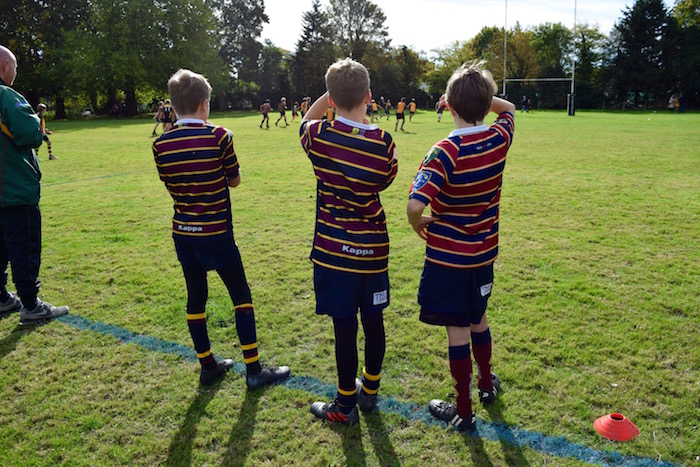 Thousands of children took to the Dry Leas fields on Sunday to tackle their way through the Henley RFC Festival. Clubs from across the South East came to show off their skills in a scrum, with teams from Amersham and Chiltern, Alton, Bancroft, Beaconsfield, Bracknell, Marlow, Old Albanians, Saracens, Tadley and Tring.

The young players, with age categories ranging from Under 7s to Under 12s, demonstrated their impressive abilities whilst maintaining the rugby ethos of TREDS – Teamwork, Respect, Enjoyment, Discipline and Sportsmanship. The competitive tournament saw the budding rugby stars swerve, spin and side-step their way to victory in the 14 minute matches. It was a fantastic opportunity for the children to hone their skills on the pitch in a positive and encouraging environment, all whilst having a bit of fun!

The festival was hosted by the Henley Hawks, who had their U7-U12 teams out in force. The Hawks teams gave more than just a stellar performance on the pitch; an army of volunteers helped to man the food stand, providing burgers and cakes for the hungry spectators (and even more ravenous athletes!) It was a fantastic way to spend a Sunday, and each and every player should be proud of their sporting achievements.

UNDER 7s REPORT, by Claudia Rooney

The Henley Hawks U7s fielded a strong squad of forty players and hosted over 100 children from other local clubs. Inspired by the success of the Henley Hawks Women’s team, for the first time ever they were able to enter an all girl team. All the children played with real skill and great energy, scoring lots of tries and embracing the TREDS (Teamwork, Respect, Enjoyment, Discipline and Sportsmanship) ethos throughout.

UNDER 8s REPORT, by Graeme Gilbert

The sun shone on a fun packed day at Henley Hawks. With Tom Armstrong ensuring military timing of the schedule with his ‘AIRHORN’ the U8’s 4 teams battled hard against all opposition and delivered excellent running rugby to the delight of proud parents on the side line.  The coaches of the U8 would like to extend our thanks to all the parents that helped out in making it a day to remember.  Specific mention going to Hannah Crispin and Jess Craig taking on the responsibility of the successful cake stand.

UNDER 9s REPORT, by James Waite

The Henley U9 squad of over 40 players made up 4 teams.  With the great conditions the teams played some fantastic rugby, in what for some was their first experience of “proper” tackling.  With competition from local clubs and further afield teams from Saracens, the Henley teams made up of the Buzzards, Eagles, Falcons and Harriers all demonstrated some great skills in delivering fantastic results across the 5 matches each team played. Some noticeable performances included stellar tackling from Barnaby Winters and Finn Robinson, extremely strong running by Astrid Waite, Freddie Unwin and Ethan Massey, and some of the newer members to the group, including Oliver Mezo and Fred Robinson, showing great aptitude and skills in learning the game. Well done to all the coaches and players for the exemplary fashion they went about the festival and setting a great standard.

UNDER 10s REPORT, by Max Tilney

Fifty players from Henley Hawks U10s took to the field in four teams on Sunday for a spectacularly successful day of Kids First rugby. The Henley sides showcased some of the superb skills and teamwork that have seen the U10s bond so brilliantly as a group. The introduction of new rucking and mauling skills at this age provides some exciting challenges and the players demonstrated fantastic adaptability and resilience throughout the day, running in some hugely enjoyable tries for all of the gathered spectators.  Skills sessions provided by Elektrik 3, the Olly Barkley Rugby Academy, helped teams make event greater gains as the festival progressed.

UNDER 11s REPORT, by Tim Golledge

The Henley Under 11’s thoroughly enjoyed their home rugby festival, a sentiment echoed by many visiting teams judging by the very positive feedback received from a number of coaches. The U11’s two well balanced sides, the Henley Harriers and the Henley Eagles, took part in pools of 7, each playing 5 matches against strong, well drilled, opposition. Both teams acquitted themselves well and enjoyed some well deserved victories alongside some narrow defeats but what was particularly pleasing from a coaching perspective was how all the players contributed throughout the day. Whether it was searing runs; crunching tackles; strong rucking or classy offloads; without exception, everyone played their part. The players should all be very proud of their performances.

UNDER 12s REPORT, by Ed Horner

The Henley Hawks U12s used the fine conditions at their home festival last weekend to play their best rugby against some of the strongest opposition teams in the area. They started brightly with a 3-1 victory over Tring, with Sam Bailey and Oli Goforth starting strongly and providing much needed forward momentum for the team. In the next game, Henley were fortunate to earn a 1-1 draw against Amersham & Chiltern. After giving away too many penalties at the breakdown, they were saved by a fine individual try from Sam Winters late in the game. Next up were eventual tournament winners Rosslyn Park, a team unbeaten for over 3 years, but the Henley team played extremely well, losing 3-0 in an encouraging encounter where Seb Bourne and Will Corbett were outstanding in defence, neither missing a tackle all day. In the final pool game, Henley beat Bancroft 8-0 returning to their trademark expansive rugby. Clever passing from Max Cranstoun and Charlie Ashford and a number of excellent breaks from Jonny Noctor, Lawrence Walker and Ben Palmer created some well worked tries. Having finished second in their group, Henley went onto play Alton in the runners up final where they finished with some scintillating rugby. They ran out 6-0 winners, using the full width of the pitch and totally outplaying their opponents from Hampshire. Ollie Johnson’s distribution at scrum-half was excellent, Ben Horner ran in a fine try from centre after patient build-up play, and Hugo Donald scored two outstanding tries on the wing benefitting from the tireless forward play of Alfie Malcolm, Oscar Thomas and Ryan Evans who dominated their larger opponents at the breakdown. The coaches were particularly grateful to England and Scottish rugby players Olly Barkley and Mike Baxter who ran a coaching clinic for the teams throughout the day and awarded players medals at the end. It was an excellent way to finish a thoroughly enjoyable day for all the squad.