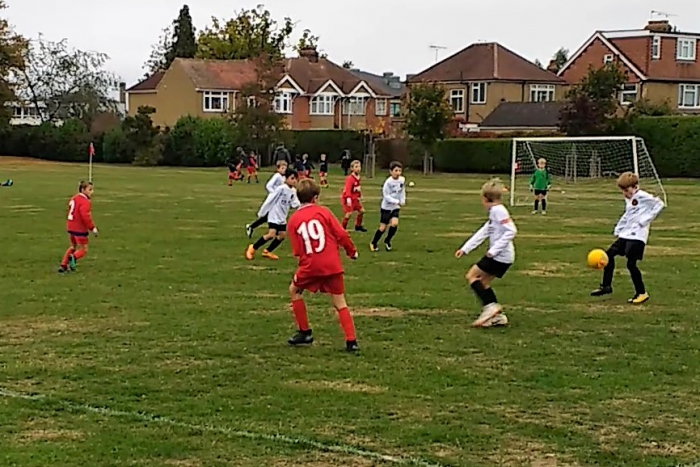 With the AFC U9 Henley Hurricanes squad back to full strength they were hoping for a good result going into their first cup match. In contrast to the previous week, the morning was grey and sunless with a biting wind leaving the players struggling to stay warm before the Windsor Youth Ospreys kicked off.

Henley started strongly and in a familiar vein of play, managed to win possession, with Harry Biggs working the ball quickly down the right wing. This led to a concerted attack on goal with shots coming from Lorenzo Nicoletti-Dowd and Freddy Estornel. Windsor fought back and pushed into the Henley half taking a shot on goal and forcing Charlie Cooper to make the first of several heroic saves.

Back in control of the ball, the Hurricanes made a good break into the Windsor area with Freddy finding an opening and converting a shot on goal with his left foot to take Henley into the lead.

Towards the end of the first quarter, the home team won a free kick just outside the box; this was hoofed powerfully towards goal and despite keeper Charlie getting a hand to it, the ball crossed the line to bring the score level at 1-1.

The second quarter opened with Henley on the offence as some great passing enabled strong shots from Archie Butlin and Rupert Arsyad, but their capable keeper kept the goal safe. The continued attacking play in the Ospreys half pushed them to concede a free kick; this was taken by Josh Ashford and his cross into the area was neatly chipped into the back of the net by midfielder Isaac Walmsley. Possibly the goal of the match was scored by striker Leo Palmer as he lobbed a shot from midfield, sailing over the keepers arms and into the goal. These two goals saw the score at 3-1 to the visitors at the end of the first half.

With a slightly more comfortable lead, Henley continued to perform confidently into the third quarter with some lovely build up play coming from Lorenzo through to Freddy then on to Leo for his second goal. A solo run from Charlie Cooper, now playing in midfield saw him dribble past several of the Windsor players and poke the ball cleanly home for goal number five for the Hurricanes.

Going into the final quarter, the visitors were firmly ahead of the home team and the onset of cold rain did nothing to dampen their efforts. After winning the ball, Archie Butlin made a good run through the opposition half and scored his first of the match. This was followed by another goal from Leo Palmer giving him a hatrick and taking the score to 7-1. The final goal of the match came from defensive midfielder Corben Galloway as he took it from his own half through the Ospreys defence and into the back of the net with a great left footed shot.

Windsor Ospreys started fairly strongly and their keeper made some valiant saves to try and keep them in the game, but once again the Hurricanes showed some great teamwork and ability to win their first cup match by a deserved score line of 8-1.