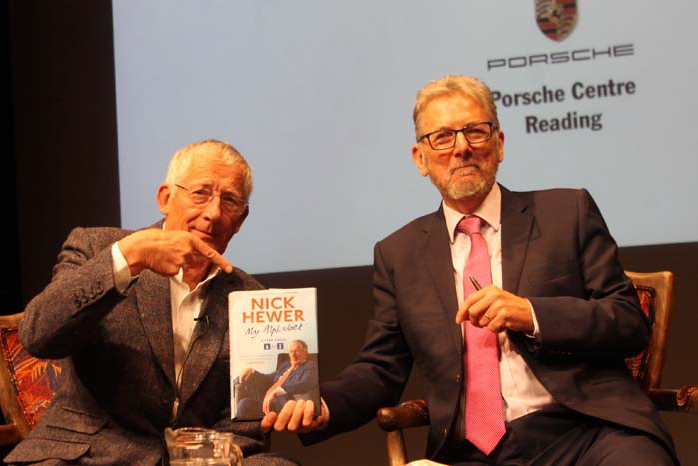 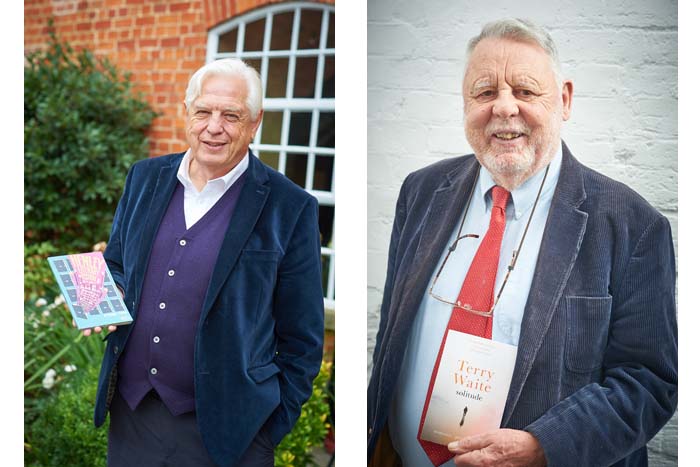 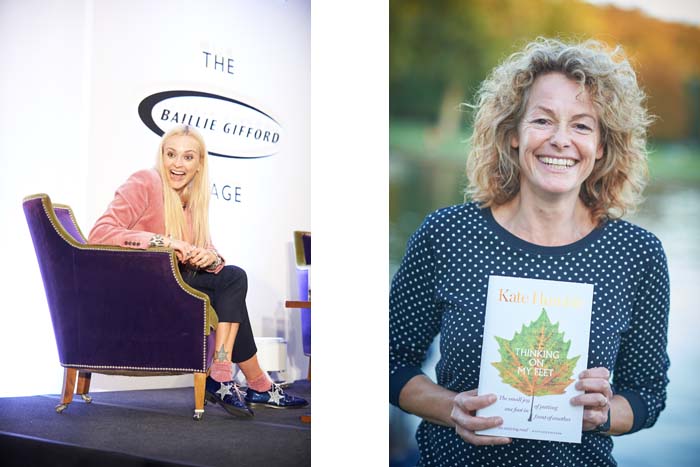 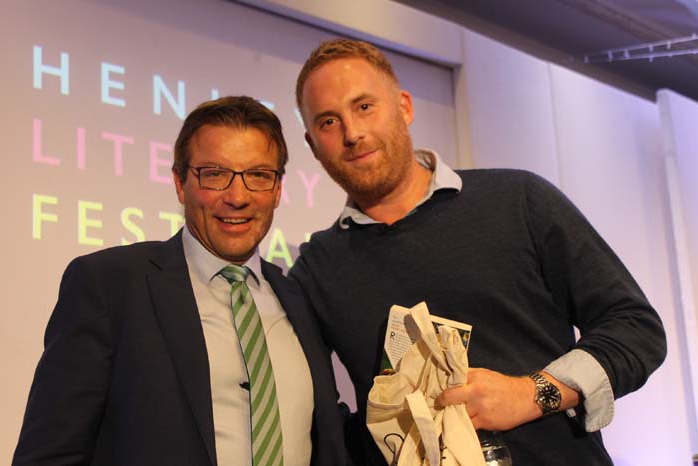 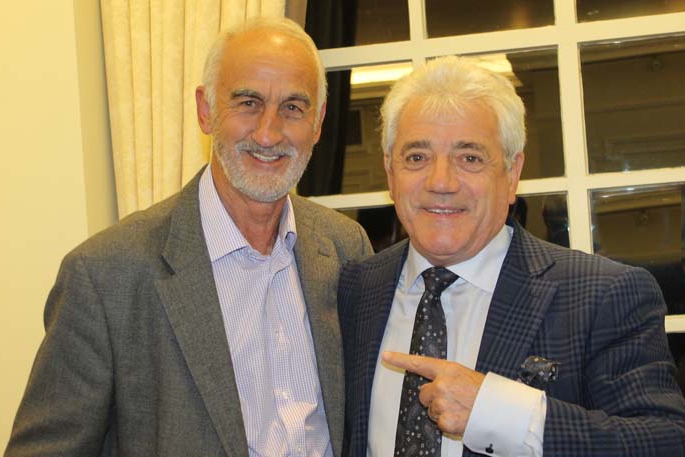 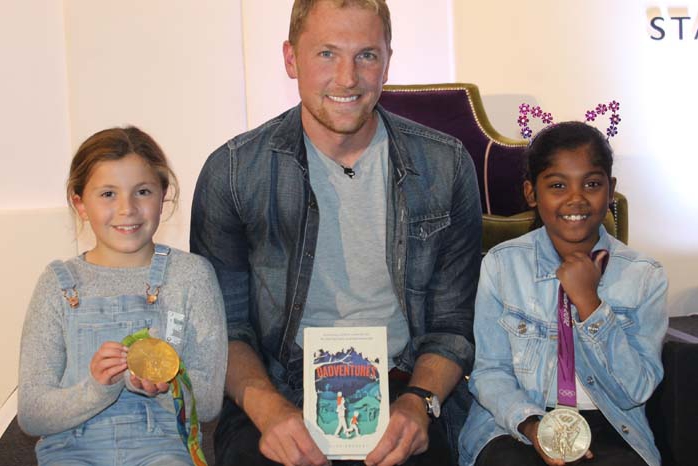 This year’s Literary Festival featuring famous authors, stars of TV, sport and politics was another great success for the organisers which this year saw it grow from 7 to 9 days with over 150 events.

There were a couple of firsts for this year’s festival with one author not showing up for their talk and the first stage invasion by children during Ferne Cotton’s talk.  Lord Renwick, the former Ambassador to South Africa was the no-show author and afterwards his publisher took the full blame for this.  Journalist Stephen Robinson who was Lord Renwick’s interviewer filled in at short notice and and talked about the book and South Africa.  Afterwards the audience who all stayed voted at the end not to ask the Festival for a refund and 21 copies of the book were sold!

Director of Programming for the Festival, Tom Ryan said, “It was our most successful Festival from a numbers point of view – with 22,000 tickets, record book sales and over 30 national media stories – but the feedback from the audiences has been the real highlight for me this year. People have been stopping me and my colleagues in the street to say thank you, and especially for bringing discussions of issues like feminism, cancer and drugs as well as amazing speakers from fiction, sport, politics and more. And knowing that it has been a hard few years for Henley’s high street it was really lovely to see shops and restaurants bustling and a general buzz around the town.”

Over the festival we were delighted to see Rob Andrew, Kevin Keegan, Nick Hewer and Alex Gregory (below).

Former Lord Sugar’s sidekick on The Apprentice and now Countdown host spilled the beans on what goes on behind the scenes of these shows, some of his early life stories and how Amstrad was thrown a life line by Rupert Murdoch and Sky.

Nick had never heard of Lord Sugar before 1983 when his PR company started working with Amstrad.  He didn’t know anything about computers either back then.  Nick was called to a meeting by Lord Sugar in 2004 with little notice to talk to The Apprentrice producers.  Nick said, “The meeting didn’t go very well and they originally wanted Philip Green (probably glad they didn’t get him now).  Alan wowed them eventually by taking them on his private jet plane to his house in Marbella.  He convinced me genuinely against my will to take the job.”

Talking about Margaret Manford, Nick commented “She’s tremendous, has a huge heart, a big temper and she’s self deprecating.  She often said, ‘I’m not standing on grass, I’ve got to consider my feet!”  The last 2/3 years took the toll on Nick with sometimes 12 hour days filming with “the demand of following 8 people who you have to write down and record everything you’ve observed.”  Nick explained, “You completely belong to the producers. The last straw was probably when I barely made it to my mother-in-law’s funeral with the car waiting outside to take me off again.”

There seems a sense of madness to the selection process but Nick assured the audience that there is a rigorous audition process and all the candidates are making money before they appear on the show.  He said, “Alan doesn’t get involved. It has to be entertaining as it is all about the numbers.  There will always be some smart people but some people grow in the process.  Everyone wants to be a celebrity these days though and that’s my worry.”

Did Nick and Margaret know who was getting fired?  Nick replied, “We had four days of briefing Alan on the teams which he then added notes to one A4 piece of paper which was divided into 2 (Team A and Team B) with everything highlighted (not sure he understood the use of the a highlighter?!)  Sir Alan then makes the final 3 all culpable and then you hear him panting and then out comes his stubby finger.  He always gets it right.”

Going back to his childhood Nick told a funny story about travelling to his Catholic Irish School in Ireland aged just 11. “I travelled all the way from Swindon on my own on the train, then I got the ferry from Holyhead where I was supposed to sleep in a berth I was given money for but pocketed this instead and slept in a lifeboat!  If your parents let you do this now they would be jailed.”

In 2014 Nick took over hosting Countdown, he commented, “It’s a great show.  It’s part of the establishment and people just love it.  The contestants just want to come on and win the teapot!”  Asked what Nick does whilst the clock is counting down, Nick replied, “The director is in my ear giving me instructions like give a bit more passion whilst I try and see if I can at least conjure up the word cat!”

“Rupert Murdoch threw Lord Sugar a lifeline when Amstrad got into trouble.  He called him up and asked him to make satellite dishes”, said Nick.  Nick then told a funny story about how Lord Sugar thought they were just like a dustbin lid so he called a company who made these as well as manufacturer of hub caps for cars who eventually gave him the best price.

Nick was promoting his book ‘My Alphabet’ he wrote after a literary agent persistently pestered him to write an autobiography.  He said “In the end I cobbled together 26 anecdotes to give my life story.”

Before writing his first book Dadventures Olympic gold medallist Alex Gregory always enjoyed writing and had his own blog.  Alex said, “The book came out of discussions after retiring from rowing and it’s all things parents can do with their kids with the time you have available.”  The book is split into activities which take as little as half an hour up to a whole day with illustrations drawn by his kids.  The ideas for the book came from the things he did as a child with his Dad.

Alex started by talking about how he got into rowing.  He said, “I was pestered by a friend to have a go.  It was something completely different to any other sport as you completely rely on your crew mates.  I wasn’t instantly brilliant at it. I was just a normal, tall guy who was naturally fit.  I spent 8 years before being finally selected for the Quad in the Beijing Olympics in 2008 when 7 days before I had a stabbing pain in my side which was diagnosed as a severe stress fracture in my rib and ending up going as a reserve.”

Four years later on home ground at London 2012, Alex was selected in the Men’s 4 with Peter Reed, Andy Triggs-Hodge and Tom Jones, Alex commented, “Being selected for the Men’s 4 was a huge pressure as all the teams before had won gold with Jurgen Grobler as coach.” After winning gold, Alex retold a story about being at a post Olympic party celebrating and was swinging his gold medal around.  He recalled, “All of  sudden it went quiet, the sea parted and Jurgen appeared saying, ‘it’s easy to do it once – the real challenge is to do it again.”  Alex went on to win gold again in Rio and delighted the audience by pulling out of a sock his two gold medals to pass around.

Alex had his own extreme adventure in 2017 when he joined a team to attempt the record of rowing the furthest north in the world.  After retiring and having no goal, Alex explained, “I got an email with a link to an Explorers Connect website which outlined the Polar row and I signed up straight away. I threw myself into it.  It was brilliant and terrible all at the same time until the weather and the sea changed and then it got really bad. If we had capsized there was no going back.”  Alex wrote a text to his family that he never sent, “Love you guys and I shouldn’t have done it.”  After 3 days of rowing with no power, running out of water and steering by a basic magnetic compass, the clouds parted and they saw land. Alex describes the moment they arrived back on land, “We were greeted by military men who were the most beautiful men we’d ever seen who gave us a beer!”

The polar adventure has put Alex’s life into perspective.  He added, “I’m just going to do adventurous things with my kids now.”