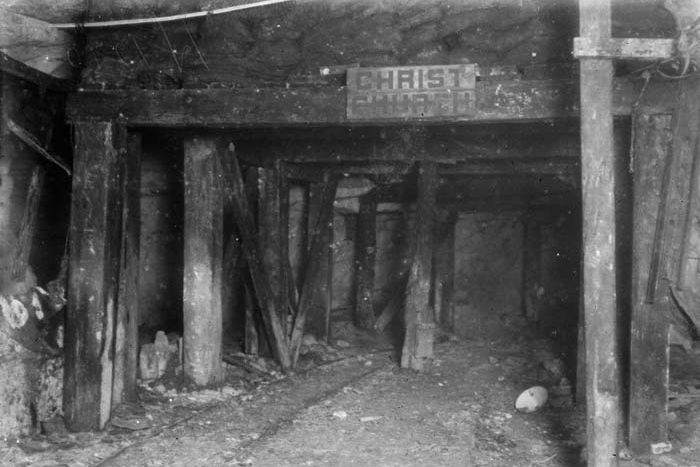 Tim Tawney was the speaker this month at Henley Probus Club.  He gave a talk, with the assistance of slides, entitled `The War Underground 1914-1918`. The talk was about the world’s first real trench warfare which took place in the northern part of France 100 -105 years ago.

The Underground war took place in the period 1914-18 on the Western Front, which was the main theatre of war during the First World War. It stretched from Flanders through the department of the Somme to Verdun and covered a distance of approximately 250 miles. Although tunnelling/mining had been around since time immemorial the physical and geological challenges presented to the armed forces and professional tunnellers were very varied. Flanders provided the most appalling conditions in the tunnels which were predominantly of clay but with much water. The Somme tunnels were mostly of chalk, which were relatively easy to mine but treacherous to live in (collapsing roofs). The Verdun tunnels were primarily of gaize rock (a type of sandstone), which provided for relatively easy tunnelling and were ‘safe to live’.

Tim took the meeting through the various tunnelling techniques and particularly the tools that were used in the construction of the various types of tunnels/mines. The tunnels were quite often 300 feet deep and accordingly there was a perennial water problem, which required continuous pumping; and there were also  gas problems.

-Tunnels in the Arras area used the longstanding medieval tunnels, which during the battle of Arras housed 25,000 soldiers.

-There is today 25 miles of tunnels underneath the Canadian National Vimy Memorial.

-The Battle of Messines in the Ypres area, conducted by the British Second Army in June 1917 had associated with it the single biggest mining offensive, which was conducted in appalling conditions.

– Hill 60 in the Ypres Salient was another huge tunnelling exercise, which saw 33,000 tons of explosive set off in a 10 minute period with huge casualties estimated between 30,000-50,000 men.

At the close of the talk, Tim was thanked by the Club members for his presentation which left many members pondering how war was conducted 100 years ago.