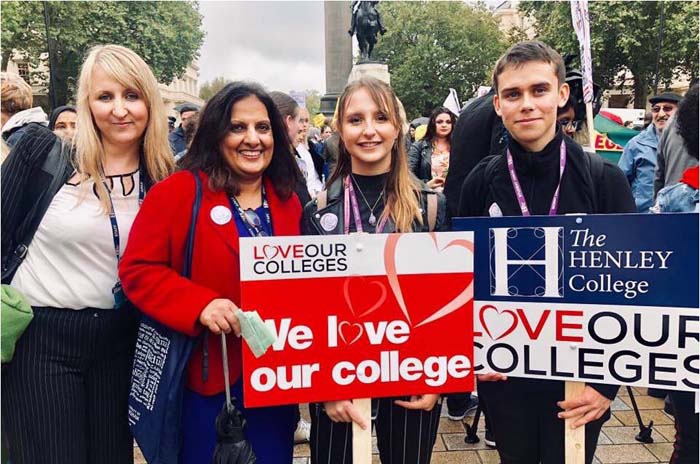 Principal of The Henley College Satwant Deol along with student representatives joined Principals from all over the UK in a march on yesterday (17 October) from Pall Mall to Westminster, followed by a rally in Parliament Square.

The Henley College has been uniting with colleges nationally with both the AOC (Association of Colleges) and the SFCA (Sixth Form Colleges Association) in order to increase government awareness of the shortfall in education funding.

This is to support the ‘Love Our Colleges’ campaign which “ is an important vehicle for the sector to shine a spotlight on the damaging impact of recent budget cuts on students, institutions and staff and to make the case for additional resource to support more and better learning opportunities. Our week of action from 15 – 19 October is a chance to shout about the brilliant work that colleges do while demonstrating the very real constraints that budget cuts have put on our ability to effectively deliver learning for all who need it.” AOC 2018

Love Our Colleges will call on the Government to increase 16-19 funding by five per cent a year for five years and provide extra ring-fenced cash for pay, reversing a decade of cuts which has seen college funding fall by 30 per cent.

Satwant Deol said “Over the last ten years colleges have done everything they can to absorb continued cuts in funding and our staff have coped admirably in continuing to provide a fantastic service to our students. Without recognition from government that appropriate funding is needed it will be impossible to sustain the continued and important work that we do. The skills of our future workforce are essential and 16 – 18 year olds need the backing of government to provide them with the essential resources they need in order to flourish and progress with confidence. To support and highlight our action, I wrote to our Henley-on-Thames Conservative MP John Howell who agreed to meet us at the Houses of Parliament, during the day of the event to discuss this issue.

I have also written directly to David Hughes, the Chief Executive of the AOC asking if they could spearhead a campaign. I have received a personal response from him asking us to unite in pushing to raise funding levels.”

The Henley College is also getting involved in the SCFA campaign, ‘Raise the Rate’ which will call for the funding base rate for all 16-18-year-old learners to be increased in the next spending review. If successful, it would mark the first increase in the base rate since 2013-14.

Students have launched an official online petition which highlights the unsustainable level of funding for FE Colleges including immediate parity with recently announced increases to schools funding. They need 100,000 signatures to have this debated in Parliament and The Henley College is urging everyone to sign the petition and get involved.  Sign the petition at https://petition.parliament.uk/petitions/229744 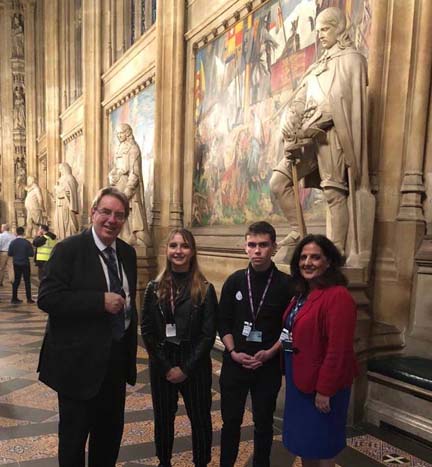