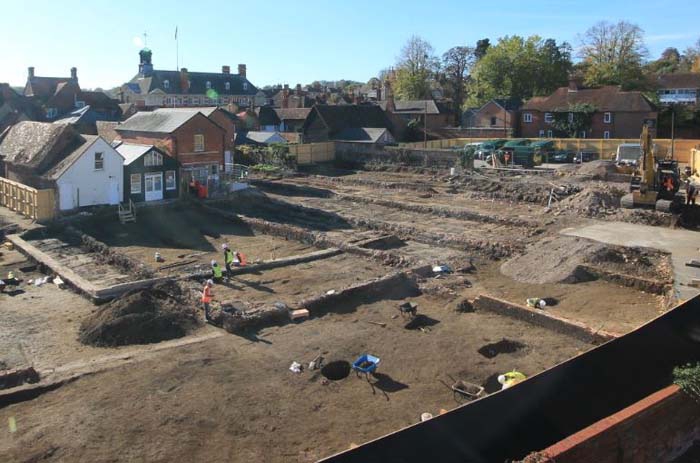 Work on site at Gardiner Place (formerly Market Place Mews) has taken an interesting turn during the archaeological dig after medieval plots have been discovered.

During site clearance for the Gardiner Place development, archaeologists from AOC have found a number of old wall foundations on the land between Market Place Mews and the Waitrose car park.

The archaeological work is being undertaken on behalf of the Gardiner Place development with the assistance of the contractors on site, J Murphy and Sons. The total area to be excavated equals approx. 45,000 sq. ft. The team have estimated that over 100 metres of walls have now been exposed.

Gardiner Place will be a multi-million pound retail, leisure and living destination that will provide a much needed transformation of the former Market Place Mews. The five week dig, which started on the 17 September, was conducted at the north end of the development site by six archaeologists.

Paul Sanders, Project Director for Catalyst Capital comments: “It’s been fascinating to find out a bit more history about Henley-on-Thames. The findings are currently being photographed and grid referenced by the teams involved and we look forward to sharing any further information when it becomes available.”

The scheme is scheduled to complete in early 2020.

Ruth Gibson, Secretary of the Henley Archaeological & Historical Group said, “These wall foundations date back to the medieval creation of the town when they were laid out in narrow plots to give equal access for new burgers to the market frontage. These rear plots were absolutely essential as they provided a service area for workshops, stables, storage, cess pits and usually a well (remember no running water , no drainage, no rubbish collection) for the functioning of the medieval town and its inhabitant.  The mostly brick and flint fabric of the walls are post medieval, as there were no bricks made until the mid 16th C here.  A good local example is the brickwork at the former Old White Hart in Hart Street, the rear courtyard range of which was built in 1530.”

Breach of Planning on Lambridge Woods Woodlands
Scroll to top