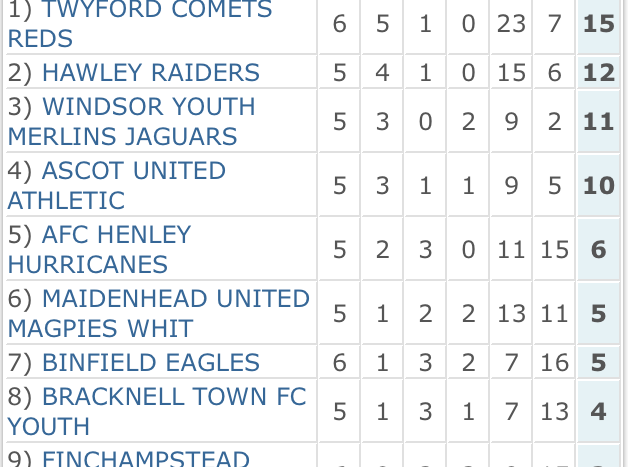 The U12 AFC Henley Hurricanes put in a stunning display as they won 4 2 away at the Maidenhead Magpies in the East Berks Division 1 League on a cold Berkshire morning.

They say that form is temporary but class is permanent and so it showed here as the Hurricanes showed what they were made of as the victory sent them above Maidenhead in the League table and up into fifth.

However, old habits die hard and the Hurricanes, kicking up hill in the first half, found themselves one down inside a minute as a strike from 25 yards got a slight deflection to send it into the top corner. It would have been easy for the Hurricanes to fold at this point as their tough start to the season meant confidence was low and tensions high in the away camp but they responded valiantly as their class shone out.

Oliver Colvin worked tirelessly down the left wing and he played an exquisite through ball to one of the men of the match, Sam Winters, who stroked the ball home across the home keeper and into the far corner of the goal to bring the scores level. The away defence had to be at their best though and were marshalled superbly by Captain Luca Thomson who was a man mountain at the back and he was ably assisted by Tom Bonser whose pace and tenacity were key in keeping the hosts out.

The Hurricanes found themselves under real pressure however and Ben Horner in the away goal had to pull off three great saves to keep his team in the game and the score 1-1 at half time. The Hurricanes management team now knew that they had a great chance to win the game as the slope and wind were all in their favour and so it proved to be.

At the start of the second half Tom Yeoman, from the centre of midfield, combined with Sam Winters with a beautiful one two and Yeoman danced around the keeper to put the visitors into the lead. Joe Turner was proving to be the perfect foil for Yeoman as he anchored the midfield in a role reminiscent of Jordan Henderson. Utility man Daniel Tsoi was also proving to be very effective as his tracking back and incisive forward play was proving key.

The Hurricanes never like to make it easy for themselves though as a lack of pressing meant that another long range shot from the Magpies went in to draw the score levels.

Again the Hurricanes refused to fold and responded manfully and Winters led the charge as he robbed a Magpies defender before calmly slotting the ball past the keeper to make it 3-2 to the Hurricanes. The other man of the match, Finnbar Scott, had one of his best games in the famous red and black shirts as his strength at the back meant that nothing got past him and he also broke forward at opportune moments to set the Hurricanes up on the attack.

More great work was to follow as Tom Atkinson pinged a corner into the box and Winters, now hungry for his hat trick, got on the end of it as he rammed the ball home to make it 4-2 to the visitors to take home the match ball and give them a deserved victory which sent them catapulting up the League table.

Managers Turner and Atkinson were said to be over the moon with the victory and were now looking forward to consolidating their League position.

If any boy or girl would like to join AFC Henley then please come down to Jubilee Park on a Friday night at 6.15pm or see the AFC Henley website for contact details.